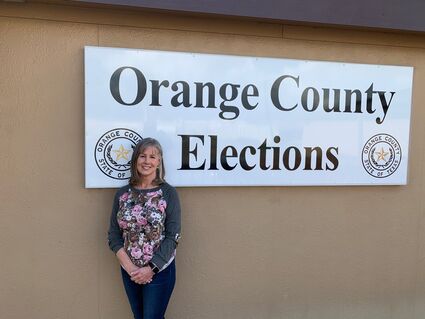 Tina Barrow, Orange County's first Elections Administrator, is retiring as of Feb. 4. Donna Alford, Barrow's assistant since 2005, is taking over.

In an average year, Orange County puts on only three or four elections.

But Tina Barrow and her three-person Elections Administration Office have no problem staying busy the other 250-odd workdays.

That's because they have 54,000 local bosses – the registered voters – and a few hundred more in Austin.

The Texas Legislature is always fine-tuning its voting rules and regulations.

"We work year-round," Barrow said. "It takes like three months to prepare for an election, maybe longer.

"You have to hire election judges and clerks, secure your voting locations, get your voting machines in order, prepare and order ballots and supplies.

"Here lately, we have a lot of new laws to keep up with."

Barrow is the only Elections Administrator Orange County has had since the position was created in 2005 via the Help America Vote Act.

She has run all the county, state, national, school district and city elections in Orange County – except for the City of West Orange – for the past two decades.

But that will change next month.

Barrow is retiring from the county Feb. 4 so "I can spend more time with my children and grandchildren and ride my horses," she said.

The Beaumont native has been in Orange County since 1980. She has five children, Latouia DuBois, Jamie Barber, Brittany Elmore, Tiffany Greer and Craig Leverett. Her husband is Jarvis Barrow.

Barrow hired on part-time with the county first in 1997, but has worked full-time on elections since 1999, when she went to work for former County Clerk Karen Jo Vance.

Donna Alford was promoted Tuesday by Commissioners Court to move from Assistant Administrator to the office's top job in February.

Cheryl Broussard, the third 17-year employee in the Elections Administration department, is staying on.

"I've worked with Donna and Cheryl since 2005," Barrow says. "I did elections in the past in the County Clerk's office. Donna did voter registration in the Tax Office. Cheryl was one of our election judges, and I brought them all together in this office."

Voter registration is a full-time job, the women agree.

"Cards come in daily. Anybody that goes to the DMV now, their card comes to us. We have to check them on our lists every year against the deceased lists, felon notices and change of address cards," Barrow said.

Barrow is staying on until Feb. 4 to help Alford and Broussard prepare for the March 1 party primary elections.

Ever the customer servant, she wants to be sure all mail-in voters are aware that they must send in a new application to vote by mail for 2022 and then for each year after.

Only those who are 65 and older, disabled, or plan to be out of town for both early voting and election day, may vote by mail.

Applications are on the county's website under the Elections Administration department page at https://www.co.orange.tx.us/departments/ElectionsAdministration . Telephoning 409-882-7973 or dropping by the office at 206 Border Street during weekdays are other options.

Barrow said the first election her office worked was in 2005, days after Hurricane Rita. Only the four early voting sites were able to be used for election day.

In 2008, after Hurricane Ike, "it was people you couldn't find," Barrow said. "We couldn't find our election judges.

"Every storm that's come through hits at the end of August, or in September, right when we're preparing for elections. Each disaster we've had caused problems because people were displaced."

Of course, the county had only paper ballots back when Barrow started. And it hasn't been able to completely abandon them yet, because all the storms have tied up the money intended to buy more voting machines.

As it is, Barrow's budget has purchased about three dozen DS200 digital scanning voting machines, enough so that each voting precinct has one available to meet the Americans with Disabilities Act requirements of the HAVA law.

"This office was created because the HAVA law required you to have one ADA compliant machine at each voting site," Barrow recalled. "All the schools and cities came together. They wanted this office."

The county bills the school districts and cities for the work of Barrow and her staff.

There have been some long nights, even some tense recounts. But Barrow says she will miss those days.

"We've come a long way, but I've loved this job," she said. "I'm very thankful to Karen Vance, the county clerk who rallied for me to get it.

"I'm blessed that God has given me this job to help support my children."