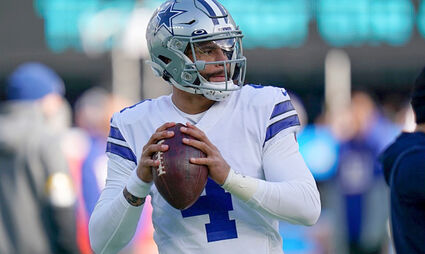 Normally, last weekend's National Football League schedule would be over and the playoff schedule for the opening Wild Card Round would be set for this weekend.

But, due to the greedy NFL hierarchy, the normal 16-game schedule was extended to 17 games in the spring meeting, with the league arguing that it wanted an 18-game schedule while the NFL Players Association wanted to keep it at 16. So, there was a compromise for 17 games.

The National Football Conference got its number one seed late Sunday night when the Green Bay Packers outclassed the Minnesota Vikings 37-10 in near zero temperatures (which is just the way the Packers like it).

When the playoffs begin the weekend of Jan. 15, every game the Packers play (except for the Super Bowl, of course) will be on the frozen tundra of Green Bay where the team is 22-2 since 2019. Quarterback Aaron Rodgers seems to get better with each game and has gone six straight games without an interception.

The Dallas Cowboys had a shot at the No. 1 seed until the Arizona Cardinals came to Jerry Jones' Palace in Arlington Sunday and hung a 25-22 loss on our Pokes. And with an 11-5 record compared the Green Bay's 13-3, the Cowboys were mathematically eliminated from having all their playoff games at home.

The Los Angeles Rams won by the skin of their teeth (20-19) over Baltimore despite quarterback Matthew Stafford thinking he still was wearing a Detroit uniform by throwing two interceptions-one a Baltimore pick-six-and fumbling in the red zone.

Tampa Bay and Dallas join Green Bay as division champions and will probably rest some of their star players Sunday because their final opponent is either already eliminated (Carolina) or in the playoffs (Philadelphia). The Packers play Detroit which is in the hunt for the No. 1 pick in the upcoming 2022 NFL draft.

The Eagles came back from a 16-7 halftime deficit and with a pair of fourth period field goals upended Washington 20-16 and secure a playoff berth for the fourth time in five years.

The Philly fans were so excited they all crowded the railing to cheer the players as they went into the tunnel. The railing broke and several fans fell to the concrete, with one barely missing quarterback Jalen Hurts, who really could have gotten hurt.

Tampa Bay had a weird incident occur during the third period of the Buccaneers' come-from-behind 24-20 victory over the Jets in New York. Troubled wide receiver Antonio Brown-who many feel like he's Hall of Fame material-took off his gear, threw it to the crowd and walked off the field bare-chested.

Two of his closest friends, O.J. Howard and fellow wideout Mike Evans, tried to calm him down, but to no avail. The story, according to ESPN, was that Head Coach Bruce Ariens told him to go into the game and Brown refused and then walked off saying he quit. Ariens said after the game that Antonio Brown was no longer a Buc.

The American Football Conference was a lot less hectic although Kansas City lost its chance to be the No. 1 seed as the red-hot Cincinnati Bengals scored 17 points in the second half-including a game-winning 20-yard field goal as time ran out-to upset the Chiefs 34-31.

The No. 1 seed went to Tennessee which smushed the Miami Dolphins 34-3 and won the AFC South championship. It was the franchise's first back-to-back titles since it was the Houston Oilers in 1960-1962. The Titans finish the season at Houston, against the hapless Texans and their 4-12 record.

The New England Patriots earned a playoff berth by crushing Jacksonville 50-10 and remain in contention for the AFC East championship with their 10-6 record, the same as the Buffalo Bills. Rookie quarterback Mac Jones threw three touchdown passes while Damien Harris and Rhamondre Stevenson each rushed for two scores.

The victory by the Patriots gave Head Coach Bill Belichick his 20th 10-win season as a head coach, tying Don Shula for the most in NFL history.

KWICKIES...I bet there was a mad dash for the casinos that accepted football wagers by Alabama fans after the early betting line favored Georgia by 2 ½ points in Monday's National Championship game. I predict the odds will change by kickoff time with the Crimson Tide favored by at least a field goal and maybe even a touchdown.

Don't be surprised if quarterback Russell Wilson will be playing his final game in a Seattle Seahawks' uniform Sunday at Arizona. He wants out and Head Coach Pete Carroll may be on his way out too, via the firing route.

Of the 43 bowl games played in the last three weeks, five were canceled, 17 teams covered the point spreads, 14 wrong winners were picked by the gurus and five won but did not cover the spread.

JUST BETWEEN US...There weren't too many sports fans who didn't know or care for John Madden, who passed away at age 85 last week. He was my favorite sports announcer and always came up with information I used in my weekly sports column. Most NFL players and sportscasters who met him were friends with him right to the end. He made gobs of money in all of his endeavors that will give his family a comfortable life.