County to take in unwanted boats 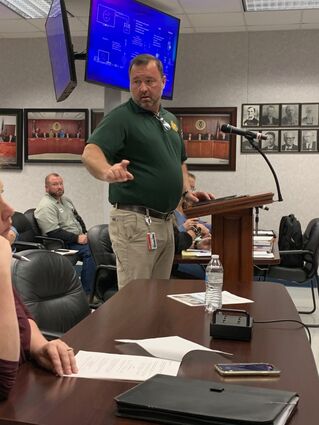 First there was High Tides restaurant going in beside the Cow Bayou bridge. Then Chevron-Phillips Chemical began clearing land for a multi-million dollar project they haven't decided on.

Not that long ago, the side of the road underwent another change.

The old fishing boat dumped on the west side of the bridge is gone.

The state of Texas spent $2.8 million in the last year removing abandoned vessels along the Gulf Coast, including that one, said Craig Cook of the Texas General Land Office.

He was in Orange Tuesday for County Commissioners Court and sold the elected officials on sponsoring a Marine Vessel Turn-In in March.

The county will advertise the program, which is tentatively scheduled to take place at the Orange County Landfill for two weeks of Tuesdays, Thursdays and Saturdays.

There should be no cost to turn in old boats.

"Since we started this program, we've held 20 boat turn-ins and have taken in 917 vessels," Cook said. "We would like this to be an annual thing, and we hope that over time, the numbers will go down to a point where we can handle each case individually."

The program brings reps from the GLO and the Texas Parks & Wildlife Department to an area to take in junked boats before they get abandoned along a roadway or in a waterway.

Cook pointed out that many older boats, like cars and recreational vehicles, are abandoned because owners lack titles and ownership titles are required before junkyards can take them in.

But he says the cost to remove a vessel from the water can go as high as $450 per foot, but the cost to crush a boat and take it to a junkyard can be as little as $12 per foot.

"I think it's a good program, and we ought to take advantage of it," County Judge John Gothia said.

Sixteen of the new positive cases have been hospitalized, one put on a ventilator. Eight of the 16 hospitalized were vaccinated, Taylor said.