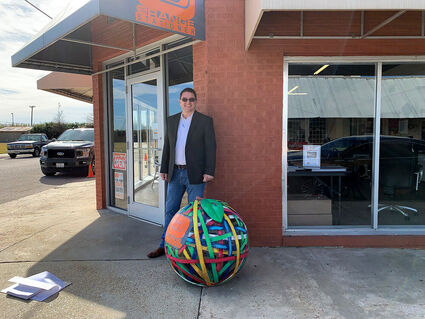 Paul Dickerson, owner of the Orange Stationer, is turning extra space into The Office Downtown, a small business incubator with the help of a city Economic Development grant.

Since its founding in 1952, the Orange Stationer has sold more paper and paper clips than one human being can imagine.

But since they bought it in 2015, imagining has become Paul and Kim Dickerson's business.

They captured Orange city leaders' imagination with a plan to convert one third of their Division Street real estate into a small business incubator called The Office Downtown.

In a world in which computers had long since replaced paper, office furniture and office décor became a large part in the business world before the Dickersons bought Orange Stationer.

And they sold a ton of it after Hurricane Harvey in 2017. But now they sell safety supplies, too. They even have small Dallas Cowboys helmets that double as Scotch tape dispensers.

But the EDC bought the idea of The Office Downtown and agreed to reimburse the Dickersons up to $75,000 based on their planned $200,000 investment. More than half that investment will go into electricity, plumbing, HVAC and ADA compliance for a space that will include three offices, a state of the art conference room and meeting space, all fronted by a well-appointed lobby.

"I've seen this concept in Houston and it's very popular and very successful," EDC Chairman Michael Smith said. "There's a lot of people that conduct business that don't have the money for their own office.

"This will give them more opportunities, as well as it's a good opportunity for the city to have it. Good job."

Dickerson said he hopes to have The Office Downtown operational in six months or so.

That includes $401,000 for waterline improvements in Sunset Park and $484,000 for lift station pumps across the city.

"I'm not real good counting on my fingers and toes, but it looks to me like we just passed over $800,000 for drainage," Council member Mary McKenna said.

"So we're listening to what you say and we're moving on."

The newly finished 130-acre Orange Rail terminal on the east side of Foreman Road has been sold by owner LJA Engineering to Alpenglow and Connor, Clark & Lunn Infrastructure, Alpenglow Rail announced this week. 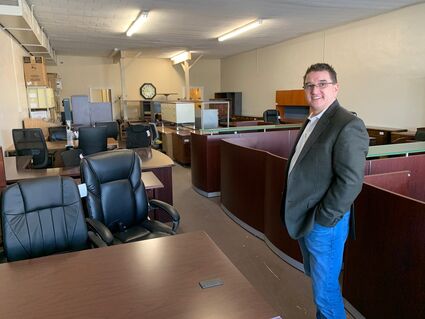 Paul Dickerson stands in the Division Street space where he intends to install the new The Office Downtown.

Alpenglow and CC&L own rail switching, railcar storage, transloading and railcar cleaning businesses in the US and Canada.

"LJA did an excellent job designing and building this facility," Alpenglow CEO Rich Montgomery said. "At USA Rail, we serve many of the same customers that will benefit from the acquisition of Orange Rail. Our new terminal in Orange is truly one of the most versatile rail terminals in the region."