The pros and cons of calorie labeling 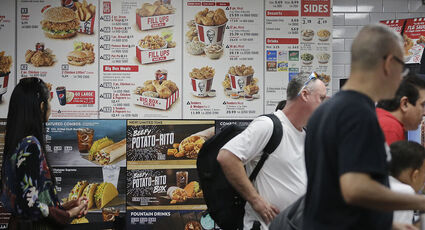 Researchers at the Human Behavior Lab investigated the potential impact calorie labeling may have on consumer food choices. (Stock photo)

One of the most popular New Year's resolutions is to eat healthier and make better decisions when choosing what foods to eat. But a recent study by Texas A&M AgriLife researchers shows there are often competing and conflicting forces at work when making food choices.

"Consumers who already know the approximate calorie content of various food options and are conscious about calorie intake often choose the lower-calorie food to eat," said Marco Palma, Ph.D., professor in the Department of Agricultural Economics in the College of Agriculture and Life Sciences and director of the Human Behavior Laboratory at Texas A&M University, Bryan-College Station. "However, when multiple food options are presented together in one menu, the decision to eat healthy may not be as simple as the consumer may expect, depending on the relative calorie distance."

Palma said the calorie distance is the difference in the number of calories in food items. This "distance" affects the visceral reaction or gut feeling related to the temptation of food items.

Palma noted the presence of a high-calorie item in a menu increases the temptation for it, making low-calorie items less appealing.

The study "Does the magnitude of relative calorie distance affect food consumption?" was recently published in the Journal of Economic Behavior and Organization. In their work, the scientists demonstrate how food choices' calorie distance creates temptation and reduces the benefit of disclosing a food calorie count to the consumer. Authors include Palma; Samir Huseynov, Ph.D., former Texas A&M doctoral student now at Auburn University; and Ghufran Ahmad, Ph.D., National University of Sciences and Technology in Pakistan.

"Specifically, we researched if calorie labels can lead consumers to choose low-calorie and healthier food decisions," Palma said. "However, we also observed an opposing factor – temptation – when a higher calorie content serves as a signal for a tastier food product."

The overconsumption of unhealthy and high-calorie food has become a public health crisis. In response, food manufacturers and retailers are now legally required to add calorie information to their labels so that consumers can make informed choices regarding calorie intake.

"However, the relevant literature on the effectiveness of offering lower-calorie alternatives has shown mixed results," Palma said. "Some empirical studies show that calorie labeling decreases calorie intake, while other studies have shown no significant changes or even show an increase in calorie consumption. As a result, the impact of calorie information on calorie intake and any potentially moderating factors has remained an unsolved research question."

He said the theoretical model they used in the study provides a foundation to explain some of the inconsistencies. It helped identify how temptation is enhanced or reduced depending on the menu consumers see and the relative calorie distance between similar items.

Palma said some recent economic models offer insights into the factors that could potentially alter the impact of calorie information on food consumption.

To demonstrate this model, the study uses the example of a soda drinker trying to consume less calories. In one scenario, the person has a choice between a bottle of water and a zero-calorie soft drink. Here, there is a relatively low temptation tradeoff because both options have no calories.

Setting up the study

"The identification of the effect of self-control failures on decision-making has always been a challenge," Palma said. "Additionally, the correlation of visceral feelings with pre-formed habits further complicates the link between temptation and the failure of self-control."

He said to help disentangle these links, the researchers established a controlled setting in which they could manipulate "temptational" differences in food choice alternatives by using similar items that differed in calorie content.

The researchers conducted two separate experiments - a lab experiment and a lab-in-the-field experiment conducted at a national restaurant chain.

"This test allowed us to focus on the role of calorie difference between alternatives by controlling product and brand preferences," Palma said. "We explored the causal relationship between the temptation distance - or calorie distance - and the likelihood of choosing low-calorie snacks."

The researchers employed a similar design for the restaurant experiment.

Subjects made food choices in 86 independent, binary menus and were only allowed to eat the meals inside the restaurant and not share food with anyone else.

The restaurant experiment allowed the researchers to test their hypotheses with real meals within an actual restaurant setting. Additionally, it allowed them to explore greater relative calorie distances compared to the snacks in the lab experiment. The prices of the meals were identical, and the researchers manipulated the calorie difference by changing the side items.

Overall, the study showed providing calorie information increases the likelihood to choose the low-calorie option by anywhere from 3 to 10 percentage points. However, the impact of calorie information depends on the relative magnitudes of the opposing forces behind making food choices.

"Specifically, the study shows there is a significant and positive relationship between the number of calories in snacks and the degree of temptation the snacks generate," Palma said. "And the effect of calorie information depends on the relative calorie difference. For example, lab experiment subjects were more likely to exhibit self-control and choose low-calorie snacks when they had accurate information about their food choices."

While the study shows that providing calorie information is important, it also shows that the efficacy of that information depends in large part on menus and menu-dependent temptation feelings and self-control costs. This may also offer a plausible explanation for why calorie labeling laws have not generated the desired outcome of reducing calorie intake.

The study also makes an important contribution by modeling and quantifying menu-dependent self-control and linking the incurred cost to incentivized food choices. This finding is particularly relevant since it may have an impact on how restaurants and other food retailers respond to the new calorie labeling laws by changing the product offerings in their menus.