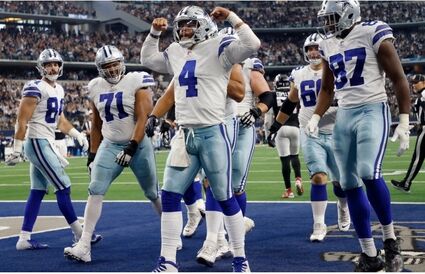 The 2021 National Football League officially ended Sunday, but not without some major surprises and upsets.

Normally, many teams that already made the playoffs will sit down a few of their star players (usually the quarterback) to avoid them from an injury. Some teams already eliminated from the playoffs will do that to see how some of their marginal players compete in a real game.

However, on Saturday and Sunday, the Cincinnati Bengals left star quarterback Joe Burrow at home while other teams pulled their stars out after halftime.

The Green Bay Packers, who had already locked up the No. 1 seed in the NFC, played Aaron Rodgers in the first half and got two touchdowns from him while Tampa Bay's Tom Brady topped 5,000 passing yards for the second time in his career, finishing with 5,316 before sitting down in the fourth quarter.

There were eight upsets out of the 14 games played Sunday, with a couple costing their team playoff berths.

The Indianapolis Colts lost to Jacksonville, perhaps the worst team in the NFL, 26-11, the Los Angeles Chargers played horribly Sunday night and were upset 35-32 on a last-second field goal in overtime that shouldn't have been.

Chargers coach Brandon Staley for some reason called a time out in the final minute while Las Vegas was driving to get into field goal range with no time outs left.

The time out gave the Raiders a chance to catch their breath and deliberate on their play selection, which was successful and got them into field goal position to win the game. Otherwise, the game would have ended in a 32-32 tie with both teams going to the playoffs. But the Chargers' loss handed the Pittsburgh Steelers their ticket to the playoffs.

And those poor souls who bet on the favorites are probably selling pencils on the street corner today because only two of the favorites in the 16 games covered their point spreads.

The "Wild Card" Playoffs begin Saturday with a new format-two games Saturday, three Sunday and one on Monday.

Our Dallas Cowboys are the only team within 350 miles from here to make the playoffs. They will host the San Francisco 49ers Sunday with a 3:30 p.m. kickoff at Jerry Jones' Palace in Arlington.

The 49ers were the final team to make the playoffs after upsetting the NFC West Division champion Los Angeles Rams 27-24 in overtime. It marked the sixth straight time the 49ers defeated the Rams.

The Cowboys are an early four-point favorite over the 49ers, but have only a 10.4% chance of getting to the Super Bowl. Green Bay has the best chance to reach the big game, but that's only 23.5% with the Kansas City Chiefs next at 17.8%, according to Football Outsiders, which rates the best Super Bowl matchup to be between the Chiefs and Packers, but only 14.4%.

Two playoff games Saturday kick off the wild card portion of the playoffs with Las Vegas playing at 3:30 p.m. in Cincinnati with the Bengals favored by a touchdown. The other game will be the rubber match between New England and Buffalo that begins at 7:15 p.m. with the Bills favored by 4½ points.

Besides the Cowboy-SF game Sunday, the action starts at high noon with the nine-point favored Tampa Bay Bucs hosting the Philadelphia Eagles. The nightcap game features Pittsburgh at Kansas City with the Chiefs favored by a whopping 13 points.

Monday's game also will be the third meeting this season between Arizona and Los Angeles, with the hosting Rams favored by 4½ points.

KWICKIES...There already has been four NFL head coaches canned within 12 hours of the season's end-Vic Fangio at Denver, Brian Flores at Miami, Matt Nagy at Chicago and Mike Zimmer at Minnesota. The list will probably expand by the time this column hits the streets Wednesday. I look for Flores to land one of these job openings because he's a real good coach and the players all like him.

A speaking of a head coach's endorsement by his players, although the Houston Texans had a lousy 4-13 season, most of the players showed support for David Culley retaining his job. He did a great coaching job against the AFC South Division champion Tennessee Titans, narrowing missing a sweeping victory Sunday 28-25, despite being a 10-point underdog. Houston has 33 players whose contracts expire this off-season with 29 being on one-year deals for the 2021 season.

An Australian judge last weekend reinstated the world's No. 1 tennis player Novak Djokovic's visa an ordered him released from the quarantine they restricted him to. The Australian Open begins Monday.

One of the leading candidates for the Jacksonville Jaguars head coaching job is none other than Bill O'Brien, former Houston Texans head coach. O'Brien was hired moments after his firing by Alabama 's Nick Saban as the Crimson Tide's offensive coordinator. Other candidates for the Jacksonville job include Byron Leftwich (Tom Brady's offensive coordinator), Doug Peterson, Kellen Moore, Todd Bowles and Jim Caldwell just to name a few according to Sunday's Houston Chronicle.

JUST BETWEEN US...The successor to Cornel Thompson as head coach of the West Orange-Stark Mustangs is supposed to be named in the next couple of weeks. I've talked to quite a few Mustang fans who would like to see former player and Mustang assistant coach Toby Foreman get the job, stating that he knows many of the parents and friends of the upcoming players and could take over without missing a beat. Toby's been a successful head coach at Beaumont Central and currently at Killeen Shoemaker, which are much larger schools than West Orange-Stark.