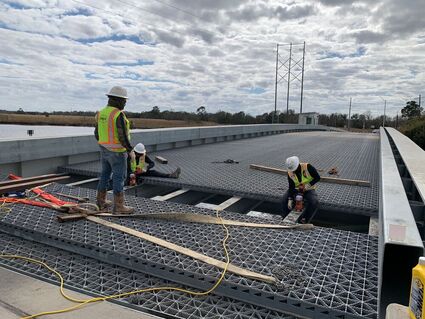 Workers for Ragle Inc. work Tuesday to repair the swing bridge for E. Roundbunch Road across Cow Bayou. The roadway is scheduled to reopen this weekend.

Mostly closed for repairs since mid-2017, the swing bridge on East Roundbunch Road, could be ready to reopen soon, a repairman said Tuesday.

But if it happens soon, don't look for Orange County to operate it.

What had historically been a favorite shortcut between Bridge City and Chemical Row is currently undergoing repairs for at least the third time since the Texas Department of Transportation replaced the old bridge a couple of years ago.

The bridge was shut down in July of 2017 after being declared unsafe.

It has been open to automobiles off and on for a while, but was closed again Monday for repairs. It is scheduled to reopen to traffic Friday.

"We all know that bridge is a lemon," Orange County Commissioner Johnny Trahan declared when the subject came up at a commissioners court meeting in December.

"I really don't feel it's in our best interest to have this bridge, but we're stuck with it," he said.

"Well, we don't have it yet," County Judge John Gothia said.

"If we had taken ownership of this bridge three months ago, we'd have been out way in excess of several hundred thousand dollars just to keep this bridge open."

The swing bridge over Cow Bayou was built to accommodate both auto traffic and tall vessels, such as barges full of material for Knife River or Burton Shipyard.

Instead of the roadway splitting and angling skyward to allow shipping through, the bridge swings to the side.

The problem now with what was originally supposed to be an $11.4 million project is that once the steel center of the bridge swings to the side, it is not closing properly.

"You can open it pretty quick," Gothia, the county judge, said last week. "But you have to manually close it and that takes 35 to 40 minutes, a long time."

Tuesday, a Ragle Inc. workman at the site said the problem was being caused by 18-wheel trucks with over-the-limit loads.

"This is not supposed to be for 18-wheelers," he said of the bridge.

"It's been an issue the whole time I've been here," he said. "It has malfunctioned every time we've tested it."

The county has not accepted the bridge from TxDOT because of fears about maintenance and repair costs on the electric motors.

"Each time it failed the tests, they had to replace parts or motors," Gothia said. "It's extremely expensive.

"We need it to be right. If we start fixing it on our dime, it'll eat up our money in the budget. TxDOT hired a contractor to do the reconstruction, so it's up to a contractor to get it right."

Oldbury was asked if TxDOT might consider ditching the swing bridge for a tall bridge such as the one crossing Cow Bayou on southbound Texas 87.

"A regular bridge would be nice," he said. "But now they've got too much sunk into this one."

Originally, TxDOT had scheduled to replace the bridge in late 2017 but a routine inspection in March 2017 declared it unsafe and caused immediate closure. Originally, the repair was to be completed in 2018.

Delays ensued, one involving an issue with mismatched parts, but natural disasters such as Tropical Storms Harvey and Imelda and Hurricanes Laura and Delta and the Big Freeze of 2021 have been part of the delay, as was the still ongoing coronavirus pandemic.