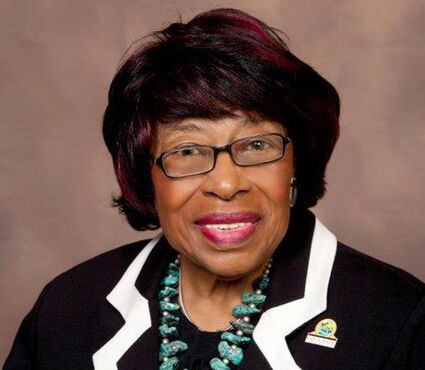 The night she was elected as Orange mayor in 1998, Essie Bellfield won by fewer than 100 votes.

But she figured she deserved 100 percent of the ballots cast.

She was Orange’s first and still only female mayor and she was the first African-American mayor in city history.

“I’m a double minority, but I don’t think that way,” she said that May 1998 night after she defeated future Mayor Brown Claybar with 51.56% of the vote. “I see all people as people. I don’t see color or sex.”

The family has asked that in lieu of flowers, well-wishers should donate to their favorite charity in her name.

Though she’s gone, no one who knew her will ever forget Bellfield.

“She was my role model,” said Rutha Clark, 80, who met Essie when she was 18 and chauffeured her around to club meetings across the South and, in recent years, to the store.

Bellfield was born May 6, 1932 in Pittsburgh, Pennsylvania but grew up in Jennings, Louisiana, where her father was a lumberjack and her mother was housekeeper for owners of a rice mill.

Her family moved to Orange, where Bellfield’s mother worked for some of the city’s top families, including County Judge F.W. Hustmyre. Essie resided under those families’ roofs and grew up among their children.

“Her mother’s name was Ollie, but we called her ‘Big Momma’ and she worked at ‘the big house,’ said Clark.

“That’s what we called the house. They had an upstairs apartment behind the big house.”

Bellfield attended Southern University in Baton Rouge, Louisiana, where she stayed in the home of Willie Mae Benton, who spent time residing in both Orange and Baton Rouge and ultimately worked with Bellfield at Orange Memorial.

After getting her degree, Bellfield worked at the Galveston hospital before returning to Orange.

The future mayor headed up the housekeeping department for Orange Memorial Hospital for years.

The service to others exhibited by her mother and practiced in her hospital job was further exemplified by Bellfield’s membership in a handful of women’s service clubs and religious orders.

In her travels with those or civil rights organizations, or representing the city, Bellfield was always Orange’s No. 1 salesperson.

“She was a person who was always interested in her city,” said Clark, who was campaign treasurer for Bellfield’s run for mayor.

She loved her family.

Bellfield outlived her youngest daughter, Colletta, who died at 64 in 2016. Magna, named after the Magna Carta, is 70.

“Essie loved her children and put them up on a pedestal,” Benton said. “I have nothing but good things to say about her.

“You can write a magazine on Bellfield.”

She outlived a husband, Wilford Collins.

“Even though she was married, she continued to use her name,” said Richard Spector, a neighbor when he was a child who was her caretaker of late.

“She told me she liked Bellfield and she wasn’t going to change it.”

Bellfield’s winning election for mayor came a year after she had already been named mayor. She was promoted from her City Council position as Mayor Pro-Tem following the death of Mayor James D. Gilliam.

In all, she served as Orange’s mayor from 1997 through 2000. She served on city council before and after her years as mayor.

She was also a clothes horse.

“One time she was on a trip to Japan and saw a fabric she liked,” Spector recalled. “The tailor delivered her new suit the next day.

“Essie got a swatch and sent it to New York and had a milliner there make a matching hat.

“She has closets full of suits and hats.”

Clark says she and Bellfield “clashed a while, then became friends who liked to clash,” she said.

And they shared a family history in the Masonic Lodge, which kept them on the road a bit. Initially, they took turns driving.

“Mayor Bellfield was always kind, loved her city and wanted what was best for the city,” Oubre said. “The things that I take away from her are her acts of kindness, her knowledge, and her love for others.”

Larry Spears, Orange mayor: “Lord, we thank you for Mrs. Bellfield and for everything she has done to glorify your kingdom. We ask that you bless her family as they grieve the loss of an amazing woman that led by example each and every day.”

Mary McKenna, Orange city council member: “She was a remarkable lady, a remarkable leader. It was a privilege to serve with her.”

Margaret Toal, Orange newswoman and historian, said Bellfield had a concealed carry permit and claimed to always carry her specially named handgun: “I wonder if she brought her Mr. Smith and Mr. Wesson with her?”

Tommy Clary: “Do you think they’re going to bury that big purse with her?”

Paul Burch, city council member: “RIP Mrs. Essie, Thank you for your service!! YOU WERE LOVED!!

Holly Halliburton Callahan, daughter of former County Judge Grover Halliburton: “My dad loved her, and she loved him. She was a wonderful community servant.”

Jarvis Buckley Jr .: “She used to call me at least two to three times a month to run her ideas by me for my thoughts. There was a time in her life she was as smart as anyone in Orange.”

Keith Longlois: “The Department of Justice sent a lady lawyer down to set the police department right. When Mrs. Bellfield got done, the lawyer left with her tail tucked.”