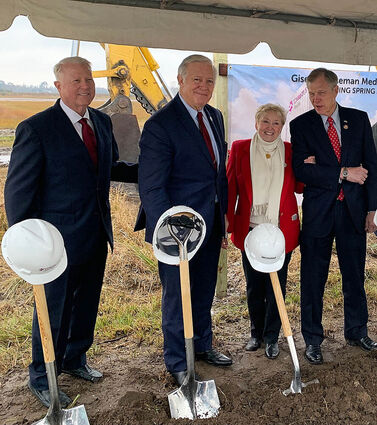 The weather outside was frightful but the occasion, so delightful.

While rain drizzled, icy winds blew, and trucks noisily roared past on Interstate 10, a group of about 100 invited guests huddled inside a tent and celebrated the groundbreaking for the Gisela Houseman Medical Campus Monday afternoon.

"What a glorious day this is. Forget the weather," said Houseman, the Orange land baron who donated 25 acres for a healthcare development near the intersection of I-10 and Highway 62.

"Today is the culmination of over five years of work to bring healthcare back to the citizens of Orange County," she said, "and what we have here today is the perfect example of everyone working together."

Completion of the project is expected to take 15 months.

"This hospital means a tremendous amount to Lamar State College Orange. It will help us with our health professions, in particular our nursing school," Johnson said.

"So we are extremely excited. It's a good day for Orange."

Area cities were represented by their mayors and city council members.

It was announced on New Year's Eve that Christus is the healthcare partner for the project and will lease a majority of the first floor.

The remaining space will be leased to independent physicians, including Dr. Marty Rutledge of Orange Medical Surgical Associates, the driving force behind the project.

He landed NexCore, a Denver-based national healthcare real estate developer who has committed to building and managing the site.

"Over five years ago, Dr. Rutledge and I started talking about getting a new hospital for Orange County," Houseman said.

"When I made the offer of the land to the City of Orange, the mayor and city council immediately committed $1 million to build a roadway to the proposed site. At that point, we were off and running.

"The next few years were absolutely consumed with meetings with the city, the Orange County Drainage District, the doctors, the lawyers, the healthcare providers and potential developers.

"Dr. Rutledge continued his efforts to bring premiere doctors and specialists on board, because we knew everything had to be the right fit for Orange County and when NexCore came in and offered to build a hospital, we knew that we had hit a home run.

"The final piece was the right healthcare provider. We not only hit a home run with Christus Southeast Texas committing to the project, we hit a grand slam."

Orange Memorial Hospital on Strickland Drive opened in the 1950s and was later purchased and remodeled by Baptist Hospital. But Baptist, citing financial concerns, incrementally reduced its services in Orange, finally closing its emergency room in January, 2017.

Since then, Orange County has been the largest county in Texas without a hospital. 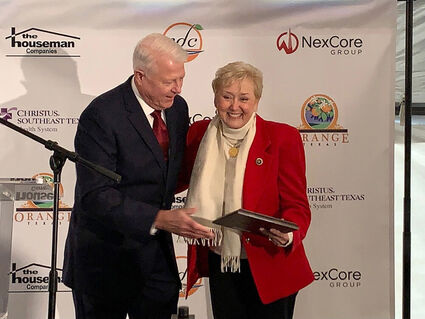 "A little over 10 years ago, before the hospital ever closed, Dr. Rutledge called me," Sen. Nichols said. "He said, 'I'm very concerned about this county and this hospital, because I think they're going to close this hospital.'

"And we did a lot, but not enough, to keep this hospital going, and they finally closed it.

Christus Southeast Texas' participation in the project brings along CMS certification, meaning emergency services will be available for Medicare and Medicaid clients.