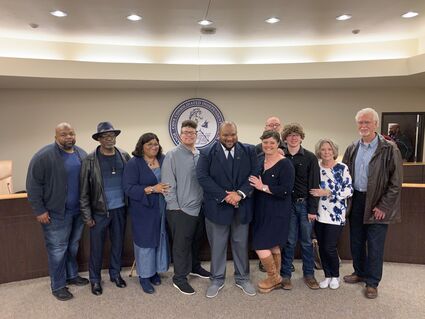 Board member Gina Simar made the motion to hire Hickman and it was seconded by Ruth Hancock. Linda Platt-Bryant, board president, and Demetrius Hunter joined them in voting to hire the new coach.

About 50 people – half the standing-room-only crowd present at the start -- stayed to the end of the 3-1/2-hour meeting and most cheered the new coach after the vote was final.

"We don't have any choice. It's done. We've got to support him," said Larnell Thomas.

He and Orange Mayor Larry Spears, Jr. were among six WOS grads who spoke against the hiring process and/or its result during a 30-minute public comment session early in the meeting.

Some of the speakers and dozens in attendance made it clear their choice for the new coach was Toby Foreman, a WOS grad and former Mustang assistant who is now the head coach at Class 6A Killeen Shoemaker.

At about 7:30 p.m., the board members went behind closed doors for about two hours of executive session that included the coach vote and five other issues, according to the night's posted agenda.

One of the other items was working on the retirement paperwork of former head coach and athletic director Cornel Thompson.

Thompson followed Dan Hooks as Mustangs head coach and, like Hooks, guided the team to two state championships. The pair of coaches made WOS the school with the top winning percentage of all Texas high school football programs.

Thompson announced his retirement in December. Hickman, a native of Silsbee, was defensive coordinator for Silsbee High where he was an assistant for 10 years before joining Thompson's staff.

Thompson will stay on the WOC payroll through June 30. Hickman will be acting head coach and AD until July 1.

Spears and Terry Johnson, a WOS grad now living in Schertz, Texas, were among 16 members of a committee asked to review resumes and applications submitted by coaches seeking the job. The committee met only once.

"I was honored when Dr. Harris asked me to be on that board, but the things that took place by certain individuals in there were very unprofessional and immature," said Spears, the first to speak on the coach search and hire.

"Normally I don't say nothing. This is my first time ever speaking out about something I'm not happy with."

Spears was just getting warmed up. He said, "I can't keep going out there and continuing to fight the good fight and telling people it's OK to live in Orange. People in positions have to be held accountable just like teachers and students."

Johnson was not happy that the district forced the committee to consider at least three applicants that had never been a head coach at the 4A level, which was one of the requirements listed on ads posted by the district.

"That's either ineptness or that's foul play," Johnson said. "As a committee member there was extreme not transparency shown in this committee."

Hickman has never been a head coach at the 4A level.

A lack of openness from district administrators was remarked upon by Erick Guillory, who asked board members to do more.

"This committee was such a major secret. Why is everything such a secret now?" Guillory asked.

Tiffany Bell echoed Guillory's thoughts on the school board and doubled down:

"We elect people to speak for us," she said. "I feel like some of you are continually failing us. If you think you can sit up here and do what you want to do, go find another school. Don't run again."

Bell and Bianca Garrett supported the hiring of Foreman.

"We are asking you to reconsider his application," Garrett said.