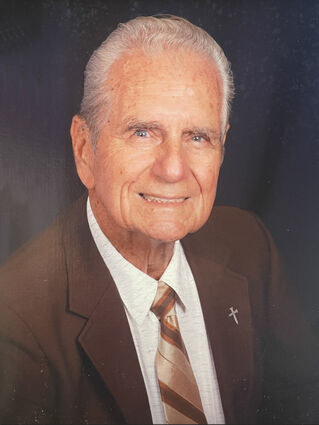 Funeral services will be 10:00 a.m., Saturday, January 22, 2022, at First Presbyterian Church in Orange. Officiating will be Reverend Bobby Daniel. Burial will follow at Hillcrest Memorial Gardens in Orange.

Visitation will begin at 9:00 a.m., Saturday, at First Presbyterian Church in Orange.

Glen Ray Green was born on September 8, 1926, to Clyde Samuel Green and Ruby Harper Green in the family home in Burkburnett, Texas. He never spent the night in a hospital until 2020. He survived a two-week battle in 2020 with Covid. He died from natural causes in the presence of his son at 6:30 in the morning on Tuesday, January 18, 2022.

He was married for over sixty years to Juanita Riser Green. Before that, he was a graduate of Stark High School. He was a Staff Sergeant/Instructor in the U.S. Army during the Korean War. He worked at DuPont in Orange for thirty-eight years reaching the rank of Mechanical Supervisor. He was Deacon and lifelong member of the First Presbyterian Church in Orange.

He was preceded in death by his parents, Clyde and Ruby Green; wife, Juanita Green; and brother, Thomas Green.