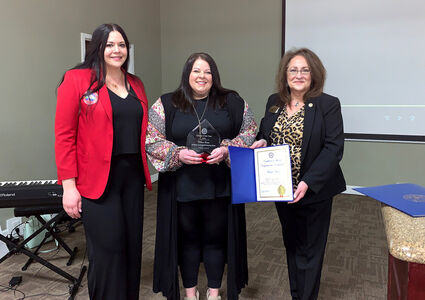 For all they do for the community, the Bridge City Chamber of Commerce recognized Melissa Isaacs as Citizen of the Year and CASA of Sabine Neches Region Business of the Year at its 61st Annual Banquet Monday night.

The Chamber numbers 179 business members, including 13 new members signed up in 2021, said 2021 Board President Rani Dillow.

The Ministerial Alliance works with 20 area churches to serve as a central agency to provide assistance with food, utilities, rent, gasoline, medicine and other items to 1,400 families each year.

Isaacs has served as Executive Director since 2013. She has a team of about 35 volunteers who serve each month.

She oversaw the construction of a new 3,500-square foot building that includes a huge warehouse, comfortable lobby, and offices. Annually, the Alliance accepts donations of Christmas toys for families in need and this past year provided to 420 children in 165 families.

CASA – Court Appointed Special Advocates – was created in Orange County to place children who are under the supervision of the court system or in the care of foster parents back in a safe family home, or an alternate permanent home.

The national CASA Association is a network of more than 900 CASA programs in 49 states. Without CASA, a child spends an average of two years bouncing from place to place in the foster care system.

CASA of the Sabine Neches Region recruits, trains and supports volunteers to serve as Court Appointed Special Advocates. As trained advocates, the volunteers are appointed by judges to be a voice for abused and neglected chidren in court.

Codie Vasquez is the executive director for the Sabine Neches Region and she received the award alongside board members Robert Currie and Cil Dixon.

Beth Arnold was named 2021 Ambassador of the Year and Jerry Jones, recently retired city manager for Bridge City, received a recognition for two decades of service to the chamber.

Zach Johnson, representing Texas House Speaker Dade Phelan, presented Jones an extra-large gavel that had been used by Phelan in the Texas House of Representatives.

About 200 members and guests attended the banquet held at the Bridge City Community Center. Tuffy's provided the meals, with Market Basket and Tejas Liquor handling the beverages.

Dillow, of Westin Mortgage Group, gave her final report on 2021: 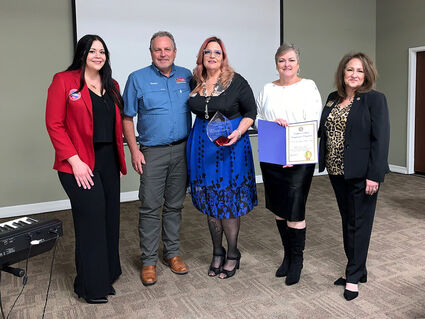 She talked about events that raised money for others, a Christmas Tree silent auction raised money for the scholarship program for high school seniors, Designer Purse Bingo that raised over $16,000, the second annual Photo with Santa event at Bridge City's Tree Lighting in the Park where children exchanged new toys for the Ministerial Alliance for snaps with St. Nick, an event recognizing first responders and the 11th Annual Christmas Light Parade, which also benefited the Ministerial Alliance.

In addition to that, the Chamber also hired a new Director in Mandy Lyda and repaired the Chamber building, adding a storage building and trees to the Roundbunch Road location.

Closing out Monday's event, Dillow transferred the gavel of leadership to Shaffer, the 2022 Board President.