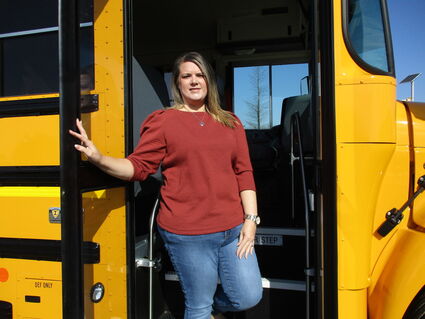 Program Director of Workforce Education Thera Celestine at Lamar State College Orange is welcoming new students to the school's Commercial Driving Program. She is standing in the new school bus purchased through a grant for the training.

Education used to be primarily reading, writing, and arithmetic. Lamar State College Orange has added to those three alliterate terms to include riding the roads for real cash.

The newest additions to the college's truck driving academy arrived at the campus the last Friday in January. A brand new bus, an 18-wheeler big rig, and a dump truck joined the fleet of vehicles used for the Commercial Driving Program offered at the college.

The 77-passenger yellow bus is the latest model of school transportation. The 2013 Cascadia truck has a sleeper cab and came with a full length trailer to haul behind it. A 2001 Sterling dump truck rounds out the newly purchased vehicles that were added to the 2004 Volvo truck with a 28-foot box trailer that was the original vehicle used for the truck driving school.

Three years ago Lamar State College Orange (LSCO) was contacted by local industry requesting them to consider creating a truck driving program. In the meantime shipping crates have been stacking up at various ports because of a lack of trucks and drivers to carry to other destinations. Many local schools have found it difficult to get qualified volunteers to drive buses for their districts.

Working with the local industrial partners the college has started a training plan for commercial truck drivers and bus operators. LSCO President Dr. Tom Johnson said listening to the community and meeting local needs is what the college is doing. "Someone can come here, they can learn a skill, a craft, or a trade in a short period of time and be able to make a livable wage and go right to work, and that's what makes Lamar State College Orange so special. Whatever our community needs we deliver," Johnson added.

The program started with one simple day cab truck, one instructor, and one student. A need for expansion was recognized leading to a grant between LSCO, Lamar State College Port Arthur and Lamar Institute of Technology that totaled $781,000 split between the three schools.

Director of Community and Workforce Education Thera Celestine with LSCO worked on writing the grant which allowed each campus to purchase equipment. "This was a once in a lifetime grant because there have been no other grants that have ever allowed purchases of vehicles, and this grant has allowed me to purchase vehicles so this is a very unique grant," Celestine stated.

Lamar State College Orange used its $295,000 portion of the grant to purchase the training vehicles which has allowed the college to expand its driving courses. LSCO now offers Class-B school bus and dump truck driver training and has hired two additional Class-A instructors and a Class-B instructor to lead the school bus driving program.

Already 50 graduates have completed the training at the LSCO driving academy in Class-A commercial driver's licenses alone. Some of those graduates are working on the roads across the nation and others are employed locally in jobs involved with driving a truck.

Celestine believes expansion will be coming soon to the LSCO Commercial Driving Program because of new federal requirements starting February 7 from the Federal Motor Carrier Safety Administration. Applicants that want to obtain a Class A or a Class B license for the first time, or anybody wanting to upgrade an existing Class B to a Class A commercial driver's license, or anybody that wants to obtain a school bus passenger endorsement can no longer just go to the Texas Department of Public Safety to get their permit. "They have to go through a training program. That is going to help our program tremendously," Celestine predicted.

The driving school is divided between Class B and Class A training. Class B is for dump truck and school bus drivers and Class A is for commercial truck drivers.

Class B currently has six students enrolled at a cost of $2,500 for 160 hours of instruction over about four to six weeks. The instruction is unique because most of the students are already working driving buses and need classes that fit around their work schedules.

Thinking outside the box LSCO designed its schedule to be 9 AM to 1 PM Monday through Friday. This allows the students to work driving buses in the morning and in the evening while going to driving class in the middle of the day.

After the current class graduates the college will accept new students to register for the driving classes every Monday. The intention is to always have six students in the course for the Class B license.

The course for the Class A has a tuition of $3,800 for 240 hours. New students are accepted into the program every Monday with classes five days a week.

There are two instructors and now two vehicles for training. When a student tests out a new student is accepted into the program.

The instructors for the driving school are all trained and experienced in operating the vehicles at LSCO. Stephanie Duhon has extensive training as the Class B instructor. Duhon is an active school bus driver for a local school district. 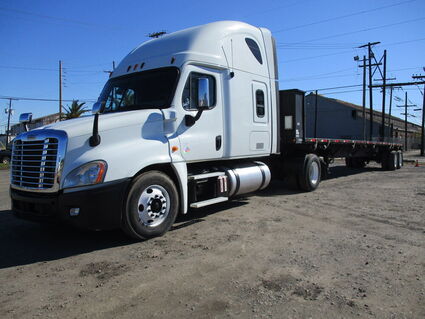 The new 18-wheeler arrived at Lamar State College Orange in late January and will give students the opportunity to drive a big rig while earning their Class A Commercial Driver's License.

The program director for the Class A instruction is Timothy Miller who has a background in driving trucks for over 20 years. Miller did onsite training for the company he previously worked for about ten years. Two part-time instructors Robert Sanders and Marlon Hartman have a combined 80 years of service working at another truck driving school.

The Commercial Driving Program at LSCO has received recognition from the commissioner of higher education in Austin and other community colleges in the state of Texas. "What's happening here is making an impact not only locally, but it's the new era of the Golden Triangle that's happening right now," Dr. Johnson concluded.

Signing up to take the bus or truck driving programs is easy. Prospective students can just go to the LSCO website and click on the Community and Workforce Education link in the center of the page to register for the Commercial Driving Program.