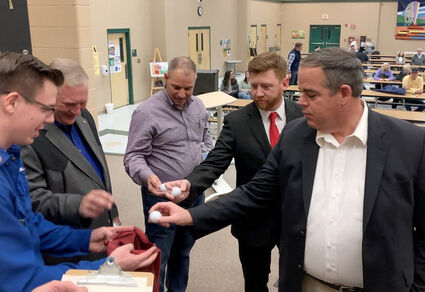 The five men seeking to be the next Orange County Commissioner for Precinct 2 agreed their widespread slice of the county needs better representation.

In last Friday's Candidate Forum at Little Cypress Intermediate School, they agreed drainage, roads, economic development and equity are concerns for a huge precinct that stretches from the eastern edges of Vidor through the Orangefield school district north to the Jasper and Newton County lines.

And they all have experience working with the public.

Judge Graffagnino, a third-term Orangefield school board member, pointed out that he was one of two candidates who brings experience holding elected office.

The other is Matt Chandler, pastor of Orange's Life Church. He previously served on Pinehurst City Council and was that city's youngest Mayor Pro-Tem at 27.

Meanwhile, Robby Lunsford, who says, "I'm not a politician. I'm a blue collar worker who wants to help my community," is currently employed with the Orange County Road & Bridge Department.

So he knows roads and drainage.

Scoring at home (coming), Sowell graduated from Little Cypress-Mauriceville High School while Lunsford, Hare and Chandler graduated from Orangefield High School. Graffagnino, whose wife and son-in-law work for Orangefield schools, got there as soon as he could and wound up on the school board.

All five candidates are running in the March 1 Republican Primary. Unless one of them gets more than 50 percent of that vote, the top two vote-getters on March 1 will be in a runoff May 24.

Moderator Kevin Steele and event organizer Leo LaBauve III sorted through questions submitted prior to the program by an audience that half-filled the school cafeteria.

It was an interesting blend of questions.

One asked the candidates, "Do you believe in the biblical definition of marriage as between one man and one woman for life?"

All said, "Yes," "Absolutely," or "I do," with Chandler adding, "I'll take it a step further: I believe in one man by birth and one woman by birth."

And the members of the audience shouted and clapped their approval.

Steele asked the candidates if their current jobs were funded by tax dollars.

Graffagnino pointed out school board members in Texas are prohibited from receiving money to serve and Chandler said when he used to serve on the Pinehurst council, pay was $20 per monthly meeting.

"I work for Orange County, so, no, no tax dollars."

The Commissioner's pay starts at $74,256 per year. That money comes from the Orange County budget. At least four-fifths of Orange County's annual budget of about $50 million is funded by property, sales or use taxes.

Another question Steele asked the candidate quintet was, "Are you in favor of tax abatements?"

Sowell, Graffagnino and Chandler all said they were whole-heartedly in favor of the process of enticing new business to locate in Orange County by not charging property tax for up to 10 years.

"I was told part of the reason Buc-ee's did not come here was because the Commissioners Court did not give them a 10-year tax abatement," Sowell said. "He said, 'Precinct 2 will be here for 900 years. Ten years of tax abatement is worth every penny of the new tax dollars, school tax dollars and the new jobs that would bring.'"

"Abatement is a very small price to pay to get businesses that will create jobs," Graffagnino said.

Hare wouldn't go all in.

"I'm for tax abatements with moderation," he said. "I think sometimes they get a little bit out of hand.

"Precinct 2 in Orange County is in a prime location, right on the border of Louisiana," Hare said. "There's a 20-mile food and beverage desert around us, which gives us an opportunity to grow with a lessened tax abatement.

"The only concern I have is, from talking to local business owners who've been here 50 years or 20 years is, 'Where's my tax abatement?' They didn't get a tax abatement."

Lunsford said he was unprepared to answer the abatement question.

Graffagnino said in his opening statement that, "It's amazing to me that five men stood up to tackle our neighbors' problems.

"I think people are afraid to think outside the box sometimes, but I think that's what's needed in Orange County," Graffagnino said. "With the big projects coming down the pipe, we're going to have to come up with some answers about how to diversify and how to spend that money. Why don't we see if we can get people on I-10 to stop off and leave us some of their money?"

Sowell also mentioned the interstate as a great financial prospect for Precinct 2.

"I've already been in contact with the state and local officials to start getting that taken care of."

Lunceford pledged to be a quick study and tireless servant if elected.

"My goal is to serve you as full-time commissioner," he said. "I will work relentlessly to study and learn so that I can offer you the best representation possible. 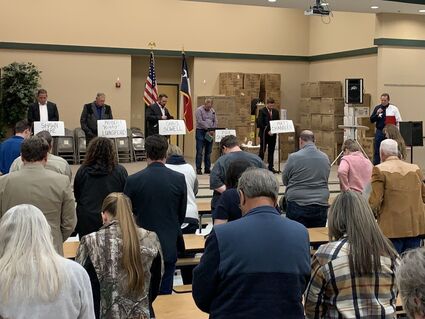 A gathering of about 75 people, here bowing for the invocation, were at Little Cypress Intermediate School Friday for the five-candidate Precinct 2 Forum.

"I will give you honesty and I will keep you informed."

Chandler is taking his shot in Orange County.

"I truly believe Orange County can be the best place to live, work, pray and worship," he said.

"There seems to have been a gap for awhile with our local officials and the county, and I'm going to change that."