End of an era

Life on the Compound 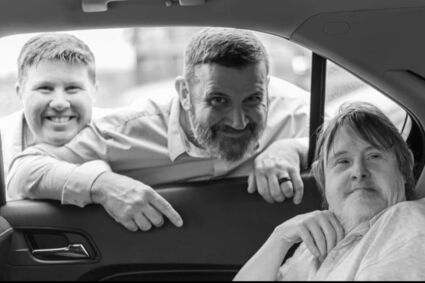 Bill LeLeux (R) with his niece Janet and nephew Jason in a recent photo shoot.

It has been quieter the last few days at home. For 19 years there has been a TV blaring from the other end of the house, frequently joined by a country music station on the radio. I don't know how Bill could stand the two noises at the same time. It always made my brain hurt when I went in his room, with the TV and radio competing for attention. Bill's brain didn't work the same as ours, so it was music to his ears.

Billy Wayne was my husband Gerald's younger brother. He was born with Downs Syndrome in 1959. He would have turned 63 on March 27, but he passed away January 25 from pneumonia. We buried him Monday.

Bill had lived with us since 2003. We moved both him and his mother in with us seven months before she died. She was diagnosed with breast cancer and we knew she would pass, so we wanted to get Bill settled in before that happened. We didn't want him to have to go through two traumas at once.

He came straight to our home from the hospital, where he had spent six weeks recovering from congestive heart failure. The heart failure almost took him out, but Billy Wayne was like a cat with nine lives. He was never supposed to walk, ride a bike or live past the age of two, but he proved all the doctors wrong.

When he lived in Port Arthur, he used to 'work' for Roy Solis at Roy's Automotive. Roy taught him how to count by paying him however high he could count without making a mistake.

Once an acquaintance of Roy brought some 'special' brownies to the shop. They went to lunch. When they returned, all the brownies were gone. Bill had eaten the entire batch. He told his mother how good the brownies were and she pestered Roy for the recipe so she could make more for Bill. Roy never disclosed the secret to why Bill enjoyed the brownies so much.

When he moved in with us, Bill became the 'mailman.' He was a mimic. Gerald was a mail carrier, so Bill became a mail carrier. We bought him a golf cart and he would go to the mailbox, get the mail and 'deliver' it to the house. We lived on a family compound so he started doing the same for the other family member. He kept trying to expand his route to the neighbors, so we had to keep an eye on him. He could be stubborn and didn't always listen when we said "no."

When Gerald retired, Bill retired from being a mail carrier and 'became' a Texas Ranger. He once set in his golf cart for three days waiting on Walker's girlfriend Cahill. He believed she was coming to dinner. That story became the basis of my first screenplay, written for a competition. Judges' feedback led me to rewrite and lengthen the screenplay. I was shocked when it won second place at Lake Charles Film Festival in 2018. Further rewrites gave it a win at the BMT Film Fest in 2019. Not many people can claim to be the subject of an award-winning screenplay, but Bill could.

The last few years, Bill became a 'construction supervisor' or at least that's what we believe. He would wear an orange safety vest and hard hat and ride the compound in his golf cart. Bill was frequently seen giving orders to workers that were only in his imagination. 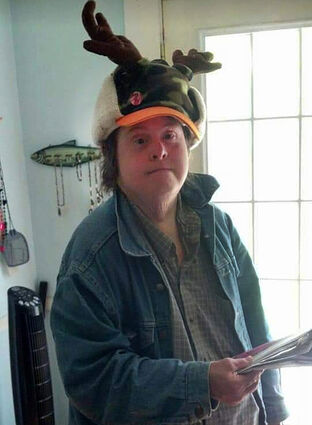 Bill was a master of disguise.

Bill was always having conversations with people that weren't there but were very real to him. The last few years the conversations increased. He also started experiencing bouts of paranoia. It got a bit expensive because he would frequently throw out food he thought poisoned. Bill also went through a period where he thought there were cameras spying on him in his bedroom. Dementia and paranoia are a common occurrence in Downs Syndrome individuals that reach a more advanced age and Bill pushed the limits on his sale by date.

It will be an adjustment to life without Bill, but there are countless stories to tell. I wonder if God supplies golf carts and does He need a construction supervisor, mailman, Texas Ranger or an auto mechanic.

Rest easy Bill and we'll catch you on the other side.