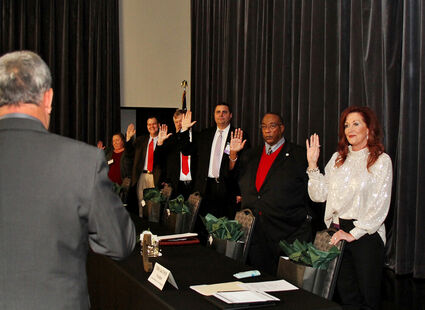 Terri Gauthier of Bridge City, right, swears in as President of the South East Texas Regional Planning Commission during its annual banquet at the Beaumont Event Center. Orange County Judge John Gothia read the oath of office to the new office-holders.

Cutline: Terri Gauthier of Bridge City, right, swears in as President of the South East Texas Regional Planning Commission during its annual banquet at the Beaumont Event Center. Orange County Judge John Gothia read the oath of office to the new office-holders.

Terri Gauthier likes to stay busy and the owner of Bridge City's Total Impressions spa and health club is doing it on a bigger scale.

The six-year member of Bridge City's city council was recently sworn in as President of the Board of the South East Texas Regional Planning Commission.

The organization, which serves as a conduit for money and information flowing between the state and the cities and governments of Orange, Hardin, Jefferson and Jasper Counties, announced new officers at the meeting.

Gauthier, a lifelong Bridge City resident, has served on the Commission's executive board since 2019.

"The Regional Planning Commission is all about helping other people, and especially when supplies and funds are coming in to be distributed during a disaster," she said.

"You have to find out where help is needed, find out who has accessibility, because it's not a luxury during a disaster: it's a necessity."

It's called a "Planning" commission for a reason. Generally, board members, who represent almost every political entity in the four counties, are alerted weeks and sometimes months in advance of upcoming federal and state initiatives, like the U.S. Census, the 9-1-1 network and federal grant programs.

But Southeast Texas has been famous recently for interruptions in normal, dealing with record hurricanes, ice storms and, like everyone else in the world the past two years, with the coronavirus pandemic.

"You really have to go with what's happening," Gauthier said. "Shanna (SETRPC Executive Director Shanna Burke) and I were talking about it.

"Our goal, of course, is to keep everything in place and keep going and growing. We just brought Jasper County in.

"But if there's a disaster, we have to help everybody survive. Our area has had some struggles, but we keep going."

Gauthier knows about disasters. As she and husband David raised two children, she opened Total Impressions as a full-service salon more than 30 years ago.

For 10 years, she also operated the Excel School of Dance. But that dance school was wiped out by Hurricane Ike in 2008.

"So we extended our salon, and this past year we opened a cryotherapy center."

Gauthier joined the Planning and Zoning Commission in Bridge City in 2014, a year before running for and winning a spot on City Council.

She has served on the Orange County Economic Development Board for five years.

"I've always enjoyed doing community projects, so I got involved with the city," she said.

And so has her family, with five grandkids.

"It keeps us busy," Gauthier said.