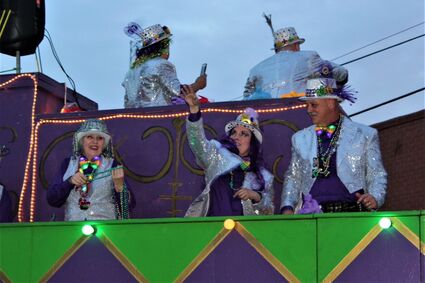 The 18th Annual Mardi Gras Weekend Feb. 18-19 kicks will feature three parades over two days of food, games and music for children and adults. This year's event features a new parade route and activities are centered at the Riverside Pavilion.

Mardi Gras, celebrating the Christian feasts leading up to the season of fasting for Lent, dates back to medieval Europe and was carried to North America by French explorers in the 1700s. A century later, New Orleans was holding parades of carts and horseback riders.

Two more centuries and Orange, Texas' Mardi Gras on the Sabine is also carrying on traditions of the past.

Everyone is asked to put on their best bell bottom slacks, platform shoes and polyester tops and shake their disco booty along a new parade route.

It runs from the Boat Ramp down Simmons Drive to a right on Green Avenue, then left on

8th Street, left on Front Avenue, left on 1st Street, right on Green and left on Simmons back to the boat ramp.

As always, on this first of three weekend parades, members of each krewe will toss beads to those lining the streets as the motorized floats pass by.

That's the kickoff to two days of food and games and music for children and adults.

"It's going to be super cool," said the Orange Convention and Visitors Bureau's Hillary Gravett.

"The krewes are super excited about it with all the music and everything."

After Friday night's parade, live music will be provided by two bands: Chubby Carrier and

Nine food trucks will be on site, along with Free State Winery and a beer booth at Riverside Pavilion.

There will be free kids' activities both days.

Saturday's events include a Kiddie Carnival from 11 a.m. to 6 p.m. and a Munchkin parade for the preteens beginning at 2 p.m.

Live Music will play all day, beginning at 2 p.m. with a performance by Osmosis Jones. The Ruxpins take stage from 4 p.m. to 6 p.m. and the Flava Band will entertain from 8 p.m. to 10 p.m.

The weekend's biggest parade, the Krewe of Krewes Parade, is at 6:30 p.m. Saturday. 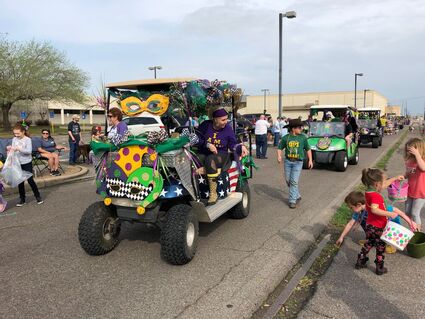 Applications for the Krewe of Krewes Parade are due by 5 p.m. Wednesday, Feb. 9, at the office of the Greater Orange Area Chamber of Commerce, 1012 Green Ave.

Deadlines to enter the Flashback Friday and Munchkin Parades are each at 5 p.m. Friday, Feb. 11 at the Chamber office.

Pickup applications and rules at the Chamber office or download a copy on the city's website, orangetexas.gov by clicking on the Mardi Gras logo at the bottom of that page.

Please note, no dogs, pets or coolers will be allowed at the Riverside Pavilion.