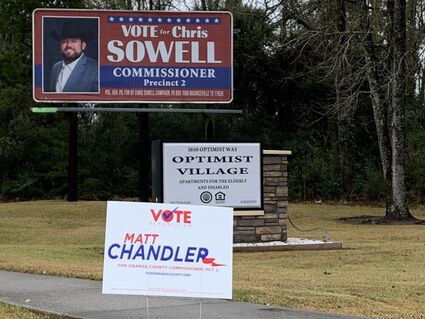 A billboard for Precinct 2 Commissioner candidate Chris Sowell along Strickland Drive dwarfs the campaign sign of one of his opponents, Matt Chandler.

J.W. Dalton, the self-proclaimed "Mayor of Mauriceville," has made it rain for Mauriceville native Chris Sowell.

The $10,500 donated to Sowell's campaign for Orange County Precinct 2 Commission by Dalton, both as an individual and through his business, Top Deck, is considerably more than the other four candidates had combined to raise a month before the March 1 Republican Primary election.

In all, Sowell, president of the Mauriceville Heritage Association, reported raising $15,410 in political donations through the end of January.

His four opponents reported a combined $9,963 in fundraising by the Jan. 31 cutoff date.

Plant operator Jude Graffagnino, a three-term member of the Orangefield school board, has not filed fundraising reports.

The only other contested race on the March 1 ballot will be for Precinct 3 Justice of the Peace.

Incumbent Joy Dubose-Simonton has raised $1,500 plus she loaned her campaign $843. Meanwhile, challenger Candice C. Steele reports $1,050 in contributions through the end of January.

While the county's four precincts were recently redrawn to give each as close as 25 percent of the county's 84,000 residents as possible, Precinct 2 is Orange County's largest in terms of area.

Former Precinct 2 Constable Mark Jones cited the distances he had to travel each day among the reasons he retired after only a year on the job. Current Precinct 2 Constable Jeremiah Gunter and retiring Precinct 2 Commissioner Theresa Beauchamp recently complained the county needs to reinstitute a car allowance for elected officials – commissioners and constables among them -- because of all the on-the-job travel in their personal vehicles.

Precinct 2 contains several communities, each with their own different needs and wants. It extends from residences along the east side of Vidor across the community of McLewis, in the northern swath of the Orangefield school district, all of the city of Pinehurst, some north Orange and what the Census Bureau calls a "Census Designated Place," Mauriceville.

Mauriceville, centered near the intersection of Highways 12 and 62, had a population of 3,267 in 2019, according to the latest figures from the Census Bureau.

According to campaign finance records turned in, on Dec. 1, 2021, Dalton personally donated $3,000 to Sowell's campaign. Also on that date, he donated $7,500 to the campaign in the name of Top Deck, Dalton's industrial supply and service company headquartered in Mauriceville.

There are no limits on campaign contributions for county offices in Texas.

The Catt Law Firm of Orange made a $2,500 donation to Sowell's campaign in November.

Lunsford joked about his large family at the candidate forum and two of his biggest funders share his last name. Donald Lunsford wrote a $1,000 check, Aundria Lunsford made an $854 loan to the candidate and Aaron Gordon of Austin made a $774 in-kind contribution, donating his webpage services to the campaign.

He reports $7,103 in expenses incurred, mostly on advertising with the notable exception of his $750 filing fee to the Orange County Republican Party.

Chandler's top contribution on the Jan. 31 report is $500 from grocer Dan Brack, his total expenses $4,913, all spent on advertising and the $750 filing fee.

In the Precinct 3 Justice of the Peace race, Dubose-Simonton's two reported campaign contributions are $1,000 from former County Commissioner and Bridge City mayor John Dubose and $500 from Beaumont attorney J.T. Haynes.

She lists $1,430 in political expenses with $913 remaining in her account.

Steele's campaign credits top donors Will Winfree for $500 in donations and Danny and Sherry Brack for $200. She reports $4,340 in expenses but did not itemize the purchases.

County Judge John Gothia is running for the second time in three years because of the quirk of his mid-term appointment in 2018. He reports political funds of $19,249 left over from his 2020 primary win over blueberry farmer Ernest Bayard and no fundraising this cycle.

Because no Democrats filed to run for county office for the second even-year election in a row, the primary winners in March will be sworn in Jan. 1, 2023, serving through Dec. 31, 2026.