Kansas makes a 'point' with its music, tour 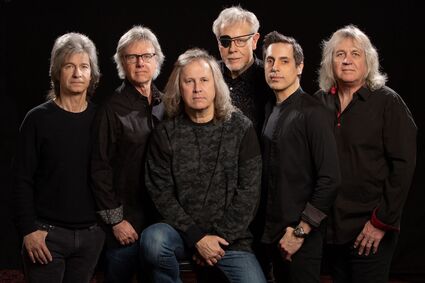 Legendary rock act Kansas is back on tour and has a "point" to make with its music and tour this winter.

Kansas will perform at the historic Jefferson Theatre in downtown Beaumont at 7 p.m., Wednesday, Feb. 16, 2022. Tickets start at $45 and are available at all Ticketmaster outlets, including the venue box office and online at http://www.ticketmaster.com.

Kansas has sold more than 30 million albums over the course of its career and is best known for the hit songs and rock radio staples, "Carry on Wayward Son" and "Dust in the Wind." The latter song is from the group's 1977 multi-platinum release, "Point of Know Return," which the band just happens to be performing in its entirety on Wednesday, according to vocalist Ronnie Platt.

"This all started a few years ago with the 40th anniversary tour of 'Leftoverture,'" Platt said in a recent telephone interview from his Beaumont hotel. "Phil (Ehart) said we would maybe do 12-to-15 show, but we ended up doing over 80 shows for that tour because it got such a fantastic response.

"Point of Know Return" was released in Nov. 1977 and peaked at number four on the Billboard Top 200 albums chart in January 1978. The album has gone on to sell more than six million copies and features the singles "Portrait (He Knew)," the title track, and, of course, "Dust in the Wind," which has sold more than one million copies on its own.

The original anniversary tour was cut short because of the current pandemic, but the band did manage to capture the majesty of one of its live performances and released a live concert album, "Point of Know Return Live and Beyond" in 2021. The band resumed touring with a second leg in late 2021 and a third leg began in January, which is currently in the middle of a run of six cities across Texas.

"The pandemic definitely put us on a hiatus," Platt added. "We didn't see each other for 13 or 14 months, so it was hard putting rehearsals together when we didn't know when we would even be able to tour again. You have to constantly keep up your chops with this music and everyone did a great job on their own while we waited."

While the current pandemic brought much of the music world to a grinding halt, Kansas followed through on its plans to release new material and unveiled its 16th studio release, "The Absence of Presence," in July of 2020. The album debuted at number 4 on the Current Rock Albums chart, number 5 on the Internet Albums chart and number 10 on the Top Current Albums chart and is highlighted on the current tour as well.

"Kudos to Phil and Rich (Williams) for still being so motivated to continue creating new material," Platt said. "This band has been going for nearly 50 years and has such an extensive library of music. It was such a welcome gift for me to be able to record new music with this band. We perform three songs from the new album on this tour and it is being really well-received by the fans."

As Platt stated, Kansas is nearing a milestone very few musical acts ever achieve which is celebrating 50 years of being together. Although the band has not announced anything official, Platt fully expects the band to do something to mark the occasion.

"We will probably do something special for sure since we are right on the cusp of our 50th anniversary, especially after these anniversary tours for 'Leftoverture' and 'Point of Know Return,'" he said. "One of the biggest compliments I hear from people after the show is that they didn't expect (the setlist) to be that good. There's no way I could write the setlist for that tour, or else it would be four or five hours long (laughing)."

For the present, Platt and his Kansas bandmates look to continue their trek across the Lone Star state and have Southeast Texas up next.

"We are really looking forward to performing for our fans in Beaumont on Wednesday," Platt added. "It's going to be a great night of music and a lot of fun for all of us."