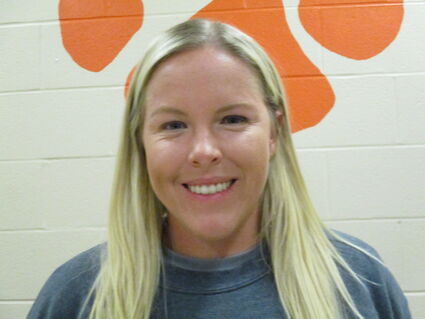 This year is already being labeled as a rebuilding year for the Orangefield softball program. The Lady Bobcats do have some very talented girls to fill the lineup in their effort to claim another district championship.

Last season was probably the most successful in school history for softball at Orangefield. The Lady Bobcats went 22-7 and 11-1 in their district to capture first place against some great district opponents. The playoffs unfortunately led to an early exit for the Lady Bobcats in the first round.

Coach Rebekah Ragsdale is very proud of last year's team and especially the six seniors that have graduated. "A very impressive group and a group that really worked hard capturing a district championship. The six seniors came in as freshmen together and were all starting by the end of their senior season. Super proud of that group, they left their legacy on our program, and they left it better than they found it," Ragsdale reminded.

There are four Lady Bobcats returning starters from last year's district champs with which Ragsdale can start to rebuild a strong team. Two of them are seniors, Madison Hughes and Joli Ponfick.

Hughes has been on the varsity all four years and will be the starting leftfielder. Ponfick likewise is in her fourth year on the varsity for Orangefield and also plays in the outfield. Ragsdale is looking for big senior years from both girls and expects them to fill big roles as leaders for the other Lady Bobcats.

The experience of being a four-year varsity player for Orangefield has prepared Ponfick to be a leader this year for the Lady Bobcats. "I love leading this team, and I can't wait to see and excited to see how we grow throughout the season," Ponfick admitted.

Sophomore Abigail Curphey played at first base as a freshman. Curphey will see a lot of time in the circle as a pitcher for Orangefield this year. Ragsdale plans to use Curphey in that role to replace Codie Sorge who graduated a year ago.

The other returning starter is junior Harleigh Rawls at second base who was the rightfielder previously. Ragsdale is not sure where Rawls will be this year, but she is a really important part of the program and can play any position she is asked to do. Rawls responded, "It's going to be real hard for me to change places like that, I've changed all through my high school career. One more year is not going to be easy, but it'll show that I have confidence in myself."

Ponfick and Rawls are key members leading the successful Orangefield Lady Bobcats basketball team who were still competing in the state playoffs as the softball season began. Ponfick indicated, "I think with us coming from basketball we have a lot of experience and we know what winning feels like so we want to carry it over."

Those two ladies are going to fit right in when they return to the softball field. Ragsdale advised, "It's a big puzzle right now, we're all just trying to figure out the right pieces."

Some new pieces that the coach hopes to fit into the Lady Bobcats lineup are sophomores Abby Broussard and Ryleigh Clarke. Ragsdale thinks Taylynn Sherman and Paris Becker are both going to be solid role players for Orangefield this season.

Another player coming off the Orangefield ladies basketball squad when the playoffs conclude is Greenlea Oldham. Ragsdale looks for Oldham to make an impact on the diamond as well.

Junior Rylee Dougay is expected to get more playing time this season after being on the varsity during her sophomore year. Dougay could fill some big roles either at shortstop or at second base.

Sadie Daigle is a senior in her fourth year in the Lady Bobcat program. Daigle will finally get her opportunity to shine this year.

As mentioned previously, Coach Ragsdale expects this to be a rebuilding year for the Lady Bobcats. Many of the players have seen the past and been a part of the successes from the last three seasons, and they know what it will take to build on that winning tradition.

Ragsdale admitted her Lady Bobcats are pretty young for the most part. "We're excited for this group and ready for them to really fill in some big shoes and some big roles, but it's finally going to be their time shine and we're excited to see what they do for us," Ragsdale summarized.

Codie Sorge filled the circle and the strike zone for Orangefield the last four seasons, but she has graduated. Pitching duties this year for the Lady Bobcats probably will be split between at least two young ladies instead of just one as was done with Sorge.

Sophomore Abigail Curphey got a little bit of time pitching last season behind Sorge in the non-district games. Curphey is expected to see a lot more innings in the circle this year.

A freshman Alysen Vincent has Ragsdale super excited to see what she can do as a pitcher. Vincent moved into the Orangefield School District a year ago when she was in eighth grade. She will be a role player for the Lady Bobcats and should get some innings in the circle as well.

Curphey was hurt throughout the early scrimmages for Orangefield forcing the Lady Bobcats to use other girls to pitch. Vincent threw most of the innings with Abby Broussard throwing the remainder during the scrimmages.

The injury to Curphey should mend before the season gets very far along. Ragsdale announced, "I definitely expect Curphey and Vincent to be my two mains."

The top of the lineup for Orangefield should be composed of the four returning starters from last season. Joli Ponfick, Harleigh Rawls, Madison Hughes, and Abigail Curphey all swung big bats for the Lady Bobcats last year and that is expected to continue for the new season.

The offensive strategy will be a little bit different this season. The homerun numbers will not be as plentiful as they were with the likes of Codie Sorge, Emma Humplik, and Olivia Grant all gone.

Ragsdale and the other coaches are working with the Lady Bobcats on how they can manufacture more runs with good base running, good bunting, and doing all the little things to move runners around. "It's going to be fun to watch them and figure out what our best combination is and what we need to do to make sure we're manufacturing runs especially in the district that we're in," Ragsdale analyzed.

Rebuilding year or not, Coach Ragsdale steps on the field as do her Lady Bobcats with the expectation they are going to win every night. The goal does not change either, and that is to win another district championship.

The excitement for Ragsdale is watching this young team grow and predicts that the Lady Bobcats' growth will be exponential as the season progresses. "There's so much growth that can be had within this group. Once again it doesn't change what we're going for, it doesn't change a district championship in our eyes, but it's going to be fun to watch how much better they get throughout the season," Ragsdale concluded.