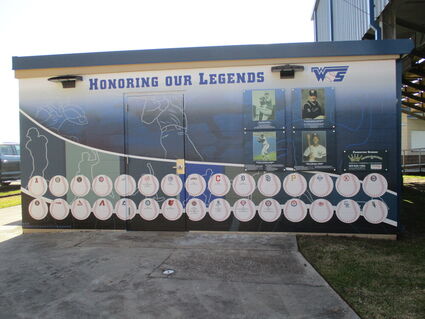 The Wall of Fame at Ronnie Anderson Park honors 17 West Orange-Stark alumni who have been drafted by Major League Baseball teams in the school's history.

The West Orange-Stark athletic boosters held their annual Alumni Baseball Game on Saturday, February 12, at Ronnie Anderson Park on the high school campus. The game marked the official unveiling of the wall of baseball legends for the West Orange-Stark Mustangs.

West Orange-Stark head baseball coach Sergio Espinal proposed the idea for the "Wall of Fame" to the booster club last year which received the support from the West Orange-Cove Schools administration. "I just thought we would give back to all the alumni that have really done well here. As you well know there are 17 of them that have been drafted, that's probably the most of any school in this region," Espinal reminded.

A special honoree was longtime West Orange-Stark baseball coach Ronnie Anderson. He mentored all the young Mustang baseball players from 1960 to 1991 and has been inducted in the Texas High School Coaches Hall of Fame.

Joining Anderson for special recognition are three of his finest players. Tony Dallas, Andre Robertson, and his brother Roderick Robertson have their pictures emblazoned on the wall next to Anderson's. 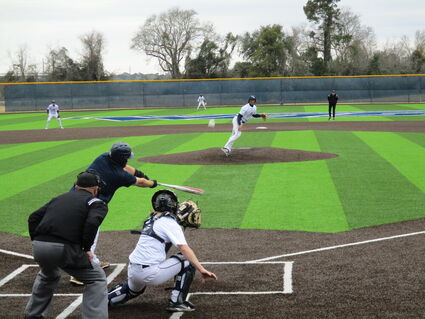 Roderick Robertson serves as a trustee with the West Orange-Cove Consolidated School Board and is the stadium announcer for most of the athletic events on campus. Seeing himself on the wall really moved Robertson. "I think it's a great honor. Just to be recognized is a total honor from my alma mater here," Robertson expressed.

Despite some earlier rain the alumni game was played on the wonderful synthetic turf at Ronnie Anderson Park which was still very playable. The alums played the 2022 Mustang varsity.

Prior to the alumni game there was a homerun hitting contest between members of the alumni team. Jacoy Finney a 2012 graduate and Jeffrey Wheatley from the class of 2005 hit balls out of the park during warm-ups. They finished tied with a homer apiece in the actual competition. Both Finney and Wheatley hope the alumni event continues and will participate again when it is held next year.