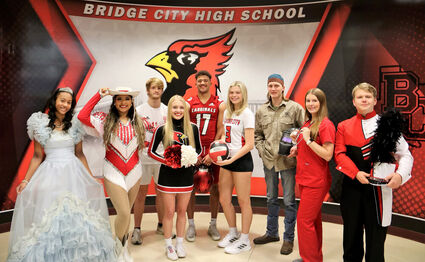 The Bridge City school district has set a two-part bond election for May 7. Proposition A, for $57.7 million, would construct a new middle school with 1,100-student capacity across the street from the current one built in 1964 while Proposition B would provide $14.7 million for construction for a career technology and education lab building.

So what's different about the Bridge City school bond issue coming up on the May 7 election?

Twice in the past eight years, BCISD taxpayers shot down bond issues, voting no by more than a 2-1 margin.

One difference, said Dr. Mike Kelly, the district's first-year superintendent, is that the tax hit will be less.

"The 2019 proposed bond was going to raise taxes 27 cents. The 2022 bond proposed bond, if both propositions pass, will raise taxes 21 cents. So we're actually asking for 6 cents less than we did in 2019," Kelly said.

Kelly said the district is set to pitch in between $6 million and $7 million from its fund balance to contribute to the projects in the 2022 bond.

Additionally, all bond projects will be built on district-owned land near the current middle school, saving the expense for portable buildings or land purchases.

"We have done everything we can to keep the price as reasonable for our taxpayers as we possibly can," the superintendent said.

"We know prices are only going to keep climbing higher."

In voting unanimously on Valentine's Day to add school bonds to the May 7 city council and school board election, the district's board members split the issue into two parts.

Proposition A would provide for a new and larger middle school campus across the street from the current one, with updated technology access and infrastructure. Proposition B would construct a new career and technology education facility at the high school.

The $57.7 million price tag on Proposition A is for a modern middle school built from scratch to handle modern technology needs and greater capacity.

In comparison, the estimated cost to renovate the current middle school -- much of which was built 58 years ago (1964) -- and pay for portable buildings for use during the renovation, would be $50.3 million, according to G&G Enterprises, the contractor for the ongoing West Orange-Cove bond construction.

Kelly said it was obvious to him soon as his arrival in April that the school district was growing faster than anticipated.

"The moment I arrived in Bridge City I saw that we had portable buildings at the elementary school, a school that was just 10 years old," Kelly said.

"That told me we were a growing school district. I had demographic and facility studies done, which painted a very clear picture: If we wait too long we will have students in portable buildings at more than just the elementary campus. I decided 'now's the time,'" for a bond issue.

The demographic study projected the district enrollment will grow by 400 students in the next decade.

"Even if both bond propositions pass, we're still three years away from something to move into," the superintendent said.

Kelly has done his research and says he was told the $25 million 2014 bond issue for a student performance center was voted down "because voters felt it was not academic" and the $46.1 million 2019 bond issue for a new middle school was voted against largely "because the voters didn't feel like they were informed enough and didn't feel like the district was transparent.

"This 2022 bond is all academic and the voters will have all the information. My approach from the beginning has been to be transparent, honest and factual.

"More than anything," Kelly said, "I want the community of Bridge City to be able to make an informed decision when it comes time to vote."

The district offers information about the 2022 bond on the internet at bridgecityisdbond.com . In addition to a fact sheet, the demographic study is linked to the website, along with a personal tax rate calculator.

Kelly says he'd be happy to answer questions by phone at 409-735-1500, but also encouraged citizens to submit questions through the form located on the bond website.

(A reminder: Senior citizens will feel no tax impact if they have filed for their "Age 65 Freeze" and have no significant home improvements.)

The cinder block construction of the middle school building at 300 Bower Drive makes wireless technology iffy for both student Chromebooks and emergency alerts.

Boys and girls PE classes share one gym and the cheerleaders, drill team and theater students have to share afternoon practice space in the cafeteria, storing the tables and chairs before practice, then setting them back up before they leave.

Shop classes don't have an inside space. They meet outdoors, when that's possible. Science labs do not have gas. The heating and air conditioning system is frequently on the blink and the building was constructed with no windows that open.

It is not compliant with the Americans With Disability Act.

Any renovation would force the district to bring the building into compliance with all current building and accessibility codes.

"The TEA (Texas Education Agency) codes were a whole lot different in the 60s than they are today," Rebecca Rutledge, BCISD's school board president, said.

The proposed new middle school campus will be built for just over 1,100 students and have a 900-student program capacity upgraded with safety and security features and technology infrastructure, Kelly said.

According to the Bond Fact Sheet, there will be space for all programs, courses and support areas, which includes a Media Center, Cafeteria, Fine Arts, CTE, Science Labs and Athletics.

Proposition B will require a $14.7 million investment for a new Career and Technical Education building at the high school, which would alleviate overcrowding at the 18-year-old high school.

Kelly said the high school, which opened in 2004, has already exceeded its maximum capacity by 75 students and is expected to surpass it by 170 students in five years.

BCISD, Kelly said, offers one of the "most robust" career and technical education programs in Southeast Texas.

In October, BCISD's board gave Kelly permission to start a small building program that would not be funded by new tax funds and not require a taxpayer vote.

The plan was to pay for a new six-classroom wing to replace the temporary buildings at BC Elementary School and add an athletics upgrade including tennis, track and an artificial turf football field.

The extracurricular improvements were made to make room for the high school Career and Technical Education expansion. The area for current practice fields is where the proposed expansion would take place.

The artificial turf will provide practice space for sports teams and a newly resurfaced and restriped parking lot can host band and other extracurricular teams' practice.

But none of that cost will come from the approximate $10.5 million in fund balance reserves that were to fund the October projects, he said.

"We are budgeting for the extracurricular upgrades out of our regular maintenance and operation budget for the next 12 years with the intent to pay them off in seven," Kelly said. "It was important for us to keep that money in our fund balance so that we could contribute more to this proposed bond if needed."

The elementary school addition is set for the summer at a cost of $4.5 million, with nearly half the cost -- $2.1 million – coming from government grants that needn't be repaid. The rest, $2.4 million, will come from the fund balance.

That $2.4 million will be the only use of the fund balance from the October program.

"The district has been extremely creative and has worked very hard to get these improvements done at this cost to the district's fund balance, leaving us in great shape as we head into the 2022-23 school year," Kelly said. 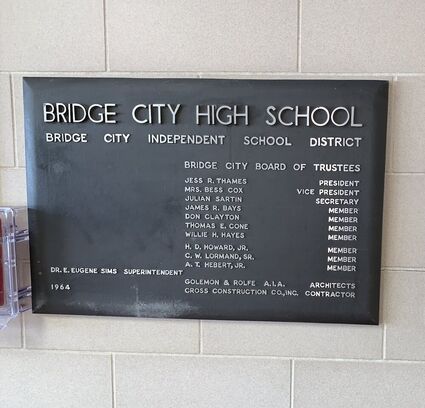 The current Bridge City Middle School at 300 Bower Drive opened in 1964 as Bridge City High School and was repurposed as a home for grades 6 through 8 in 2004.

No cost estimate was ever provided for the CTE building last fall, but now a prime selling point for the new track, tennis court and artificial turf has been left for the taxpayers to decide upon this spring.

Another thing for voters to decide – a no-brainer -- is a state constitutional amendment that would raise Texas schools' homestead exemption from 25 percent to 40 percent.

In a social media post last weekend, Kelly urged the community to stay positive and work together.

"It's understandable," Kelly said, "that people are passionate about the issue. No matter which side of the bond issue you may fall on, my sincere hope is that we will find a way to work together.

"The schools need the community just as much as the community needs the schools. Two months of negativity will only be counterproductive. At the end of the day, we all want what's best for Bridge City and I hope we can remember that."