Made in Orange, JFK Ferry bought by Big Apple celebs 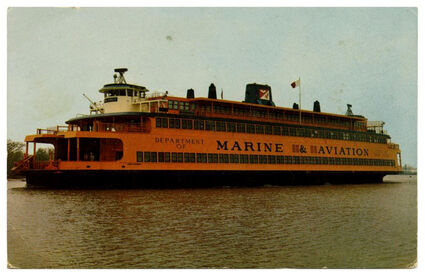 People in the Big Apple aren't forgetting the importance of little Orange in their history.

The iconic Staten Island Ferry John F. Kennedy was built in Orange at Levingston Shipbuilding and has been bought by investors, including two famous comedians, to become a New York City entertainment venue.

In January, Pete Davidson and Colin Jost of Saturday Night Live, made international headlines when they bought the John F. Kennedy at auction. Jost is married actress Scarlett Johansson and Davidson has been in gossip columns recently as he dates Kim Kardashian.

The ferry was retired in August 2021 after 57 years of service between Staten Island and Manhattan, two of the five New York City boroughs.

Adam Conrad, president of the Heritage House Museum of Orange County, announced last week that an architect and developer who is part of the group of buyers contacted the museum about the history of the ferry. The architect knew where the ferry was constructed and is looking for any memorabilia. The museum has sent by email photographs in its collection that were taken during the JFK's construction.

The JFK was one of three diesel-electric ferries the New York Department of Transportation ordered from Levingston Shipbuilding in 1963. The New York Times reported the contract was for $11.64 million, which is about $1.1 billion in 2022. The other two ferries were American Legion and The Gov. Herbert H. Lehman.

Construction contracts like that one made Levingston Shipbuilding one of the biggest employers in Orange.

The JFK hull was laid at at the shipyard in 1963. The New York Times in the May 16, 1964, edition reported the ship was being launched in Orange that day to become "the newest, largest, and finest of New York's Staten Island ferry fleet." Mrs. Walter B. Coleman, wife of the deputy commissioner of New York's Department of Marine and Aviation, was in Orange to christen the ship with the traditional crack of a champagne bottle.

The Orange Leader daily newspapers from that year are not online and local libraries do not have microfilm readers to look at the edition from the launching.

The Times said the JFK ferry was 294 feet long and 69 feet wide. The main deck had three lanes for vehicles "with a total capacity of 50 automobiles. Passengers had smoking cabins on each side of the vehicle areas.

Two upper passenger decks had snack bars and restrooms with a capacity of about 3,500 people.

The JFK ferry through the years became the most popular one in the Staten Island ferry fleet and has been seen in television and film. Its most famous film was "Working Girl" in 1988 directed by Mike Nichols and starring Melanie Griffith and Harrison Ford. Several scenes were shot with Griffith and Joan Cusak riding the ferry. It was also featured in the Oscar-winning theme song by Carly Simon.

The New York Department of Transportation officials likely knew the reputation of Levingston when they ordered the three ferries. A Levingston-built ferry named Hamilton was launched in 1940 and ran between Staten Island and Brooklyn until 1964 when the Verrazano-Narrows Bridge opened.

The Orange Leader at the time reported the diesel-electric ferry Hamilton had 950 horsepower and Levingston worked with General Motors. Mrs. E.W. Brown Jr., wife of Levingston president, "carrying a magnificent corsage of roses" crashed the champagne bottle to christen the Hamilton.

A state historical marker for Levingston is off Simmons Drive near the Orange Riverfront Pavilion with other markers for World War II. It says brothers Samuel, David, and John Levingston moved to Orange in 1859 and established a yard to build wooden ships.

About 1919, Captain George Levingston, son of Samuel, started his own shipbuilding company. In 1930, he bought five acres of land along the Sabine River on Front Street at Mill Street. Local industrialist Edgar Brown Jr., invested and acquired a major share of the shipyard in 1933 during the Great Depression. 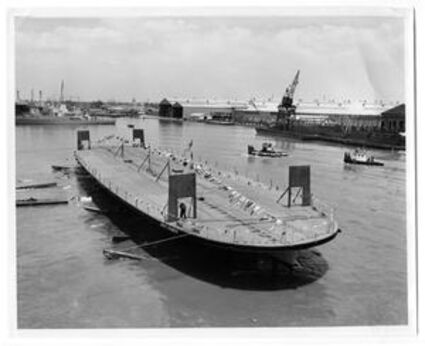 The book is "From Orange to Singapore: A Shipyard Builds a Legacy" and is available on Amazon.