Bears to Battle for Playoff Position 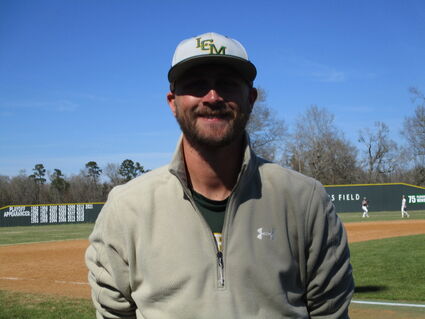 Little Cypress-Mauriceville has had a history of consistency of playing well in baseball over the last several decades. The Bears are confident that tradition will continue again in the new high school baseball season.

The Little Cypress-Mauriceville Bears hope to improve this season on their performance of last year. The Bears finished fourth in the district and made the post season before being eliminated in the bi-district round of the playoffs. "The outcome wasn't necessarily exactly what we wanted, but I think that we have a lot of guys this year coming back and we're trying to build on that winning tradition that LC-M has been known for, for a long time," Coach Hunter Hagler explained.

In his third-year as the head baseball coach at Little Cypress-Mauriceville, Hagler has several key players back from the team that made the playoffs last season to help this year's squad. Some of those lettermen will be playing bigger roles than they did previously.

Two of the leaders for the Bears were also key performers on the successful Little Cypress-Mauriceville football this past season. Ashton Landry was a leader as the quarterback on the football team and will be an important player for the Bears this baseball season. "I just want to be the best leader I can for these guys by coming out to compete hard, work hard like we've been at practice, and I feel like we're going to be really good this year," Landry replied.

Another football player who contributed to the Bears' winning season is Dean Reynolds. He multi-tasked on the gridiron and will be used by Coach Hagler similarly on the baseball diamond to help achieve a lot of wins. Reynolds commented, "We're a very good team this year, I feel like this year that we're getting to be more like a team, we're coming together and bonding better. I feel like it'll pay off when the season comes around."

Pierce Brown and Gage Griffith are two of the Bears that Hagler expects bigger things out of this season to help Little Cypress-Mauriceville improve. Brown agreed, "I'm very excited for the new season. Obviously, the district is very good, but we're here practicing every day, competing. I think we'll do pretty good this season."

The makeup for this season's lineup in still up in the air according to the coach. "We're really trying to work through that and figure out exactly who we are as a team and as a group of players trying to reach a common goal," Hagler explained.

There are several Bears that saw limited action for the LC-M varsity that should make a bigger impact this year. Blaze Compton did some courtesy running last year, but will play a more significant role for Hagler during the season.

Cameron Bilbo is coming up from the junior varsity to play a substantial number of games in the field. Hagler will use Bilbo on the mound for a good amount of innings as well.

Three freshman could see playing time on the Little Cypress-Mauriceville varsity. Hagler is excited to see how Parker Seago, Marco Bandiero, and Landon Richards fit in the lineup for the Bears. Hagler expressed, "Those are the three freshmen right now that we think could play some type of role, two of them for sure could definitely be significant role players for us in what we're trying to do."

Little Cypress-Mauriceville should be able to put runs up on the board this season. Hagler believes he has several Bears that can potentially do a lot of things with the bat from just putting the ball in play consistently to hitting the long ball on occasions. The Bears do have some players that run well and that could play a bigger part of the offense this season.

The Bears' offense should be balanced with some power and some speed on the base paths. "We have guys that fill gaps and play roles where we need them to be at any point in the lineup. I think some guys are really going to step up this year, I think we'll be able as far as team offense goes to have a deep play book and that we'll be able to run," Hagler emphasized.

Consistency may be the best way to describe the pitching for Little Cypress-Mauriceville this season. The Bears have experienced arms with nine pitchers who have appeared in games for the varsity and will be used again by the coaches to get opposing batters out.

The Bears' pitchers may not be overpowering, but they will fill up the strike zone and rely on a really good defense behind them. Coach Hagler compliments the work done by his assistant Coach Jake Nash to position the infielders and outfielders where they need to be to make the play when the ball is struck by opposing batters.

Gage Griffith is confident the Bears will be competing for a district championship this year. He will see time in the field, but will also be called on to throw late inning relief out of the bullpen. "I think we'll be pretty good, top of the district personally. My job is going to be get on base, then throw a lot late in the game. I think it's going to work out very good. I'll go in there throw a lot of strikes, throw a few pitches, get a lot of outs," Griffith predicted.

Hagler summarized, "We have a lot guys who know how to play the game, younger guys freshmen all the way up to seniors that have been in the program four years now. We're excited about our pitching staff."

After a fourth place finish last year, Hagler believes Little Cypress-Mauriceville may surprise some district opponents this year with their improved play and grittiness on the field. "We'll be a group of guys that might not overpower you, but I think we'll be very fundamentally sound, I think we'll play great defense, I think like I said earlier we'll be able to have a deep team offensive playbook, and we'll fill up the zone and throw strikes," Hagler concluded.

The Little Cypress-Mauriceville Bears will participate in three tournaments, two of them local, before the start of the district schedule. First will be the Brandon Belt Classic in Lufkin February 24-26. The Certa-Bearden Classic the weekend of March 3-5 will be played at Ronnie Anderson Park on the West Orange-Stark High School campus. The third tournament is the Orange County Classic to be played at Little Cypress-Mauriceville's Don Gibbens Field the weekend of March 10-12.