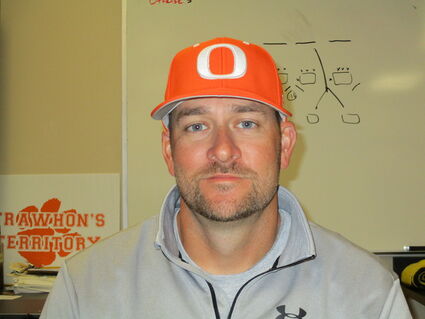 Orangefield will be dropping in classifications next season, but this year the Bobcats hope to remain in the lofty perch they achieved last season in baseball. The Orangefield Bobcats were the district baseball champions in 2021.

A 10-2 record earned the Bobcats first place in their very competitive district. Orangefield was playing its best ball of the season as the district games wrapped up and advanced four rounds into the post season before being eliminated by Rusk in a one-game playoff.

Coach Tim Erickson has some Bobcats returning from last year's championship squad. Orangefield should be very solid up the middle with their three stars returning at catcher, shortstop, and centerfield.

Macoy Marze has been the starting catcher for the Bobcats. Marze was the district defensive most valuable player last year behind the plate for Orangefield. "We have a few pitchers returning with Trent Eaves, Coop Longron, Colbie Sowell. They're going to lead us on the mound and throw strikes. We have a few guys coming up from JV that are big hitters to help us do good this season," Marze analyzed.

Shortstop Tyler Shearin was strong with the bat and especially the glove for Orangefield. He was first team all-district for the Bobcats. "As a senior I think a lot of people kind of look up not just to me but a lot of these guys out here, and I want to be somebody that people can look up to, and I want to have another great season and hopefully we can go on win a state championship as well as another district championship," Shearin expressed.

In centerfield is Kameryn Henderson the district MVP for the Bobcats, but was also selected as an all-state performer. Henderson excelled as a leadoff batter for Orangefield with a high on-base-percentage and is a threat to steal on the bases. Henderson replied, "My job is to get on base anyway I can and hopefully score."

There are also quality Bobcats coming back on the mound. "Trent Eaves, I think he'll have a big season on the mound as well as Coop Longron, and then I'll be looking for some other guys to step in to contribute," Erickson announced.

Jason Bowdin is one of the Bobcats, Coach Erickson expects to step up and be a strong contributor this season. Bowdin played some outfield for Orangefield later in the season last year and saw time on the field throughout the playoff run by the Bobcats swinging the bat really well. He will be called on to pitch more innings and could be a standout pitcher.

Three Bobcats Brennon LaCoq, Morgan Sampson, and Rusten Traxler are moving up from the junior varsity and should make contributions with the varsity this year. Erickson evaluated, "Sampson should help out on the mound, and Traxler we're going to see what he can do, we know he's going to help us offensively it's just going to be a matter of where we can plug him in in the field."

Orangefield should be really balanced offensively this year. Erickson stated he has some Bobcats that can run, some that can hit for power, and other guys that can really handle the bat for base hits and moving runners up.

Kolbie Sowell has some power and is aggressive at the plate. Henderson and Shearin both do a good job at the top of the batting order for Orangefield. "Everybody else it's just a matter of seeing if they can get it done whenever the games start, but the hitting looked fairly good during intra-squad and scrimmages so far," Coach Erickson advised.

Eaves and Longron gained quality experience last season getting to pitch in the pressure filled games during the playoffs, and the coach is looking for those two to be the leaders on the mound for Orangefield. Eaves agreed, "I think it will benefit us because we saw a lot of good talent last year during the playoffs and I think it will benefit us by playing some other teams during the tournaments early this season." Eaves said he plans on working to throw strikes, improve on his off-speed pitches, and to locate his pitches better.

As Erickson mentioned, Bowdin is a guy that he looks to go to for more innings. Erickson added, "Kolbie Sowell and Morgan Sampson I think that'll be our other main contributors pitching wise on the varsity."

The goal for Orangefield this year as it is every season is to be the district champions. The Bobcats have been there and done that so they know the supreme effort it will take to repeat.

The first task is getting into the playoffs according to Coach Erickson. Next is to then sit down and reestablish goals to evaluate what kind of baseball the Bobcats are playing. Erickson confirmed, "A district championship will definitely be something we're setting as one of our goals."

It will not be easy to repeat as the district champions because Orangefield's district as always is loaded with tough competition. Erickson reminded any night any team in the Bobcat's district could beat anybody else.

Reviewing the district opponents Coach Erickson knows Silsbee will be real tough. Bridge City and Little Cypress-Mauriceville are always very competitive. Vidor has a very good pitching staff, and Lumberton is a good team with a new coach. 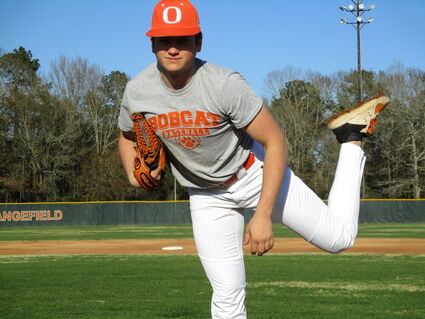 It could come down to the last game of the regular season for the Orangefield Bobcats to determine where they will finish in the district standings. "In our district every game is a tough one there are no free ones so we've got to be ready to play," Erickson concluded.

Tournament action will prepare the Orangefield Bobcats for the start of the district schedule. The Bridge City Tournament starts Thursday, February 24. That will be followed by the Spring Hill Tournament the first weekend in March.

A final tune up for Orangefield will be the Silsbee Tournament scheduled for March 10 through March 12. The Bobcats will get a chance to preview their first game in the district schedule during the tournament. Orangefield and Silsbee play their opening game of district on Tuesday, March 15, at Silsbee. The Bobcats then play Bridge City on Friday, March 18, in Orangefield.