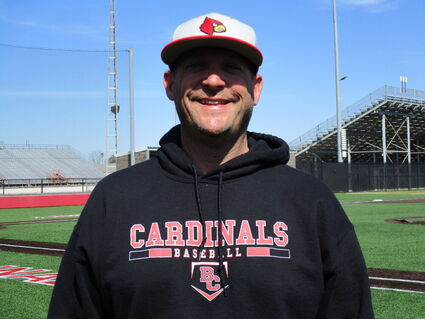 The Bridge City Cardinals should rebound from a frustrating season a year ago. The Cardinals will look to regain their perch atop the district standings that they have achieved 26 times in the school's great history of baseball.

A third place finish in the district last year can be traced to Bridge City losing five league games in extra innings. Those close losses were tough mentally for the Cardinals, but they learned from it, grew from it, and they still battled to make the post season.

A final extra inning loss in the bi-district round to Hamshire-Fannett eliminated Bridge City from the playoffs, the Cardinals earliest exit from the playoffs in 18 years. "Finishing third from an outsider's perspective might look a certain way. From our perspective we grew from it, and we're excited for what that brought us for this year. Third is not where we want to be, and so we worked all off-season to get to where we want to be," Coach Chad Landry of the Cardinals indicated.

Amongst the many new faces for Bridge City, Landry does return one Cardinal this season to help anchor the lineup. Brice Swanton will play shortstop for the second year in a row. Swanton is the cog of the infield and will be a strength for Bridge City at a key position.

Justin Abate plays behind the plate as catcher and on the mound as a pitcher. "I like catcher more honestly, and I think that I'll be contributing more at catcher while pitching a little bit this year also," Abate replied.

There are other athletic players with some experience in the Cardinal program that Landry will use this season. Landry explained, "Defensively it's going to look different, offensively the lineup is going to look different. Our first scrimmage I'll probably hear some people saying who's this guy like nobody knew who these guys were, but we've a lot of new faces and a lot of guys that are hungry, so I like it, I like the makeup so far."

One of the new faces is leadoff hitter John Van Huis who will play centerfield. He is a scrappy left-handed batter and plays the game the right way according to Landry. The fans should love to see the way Van Huis plays the game.

Van Huis understands the importance of his being at the top of the Bridge City batting order. "I think it'll be good. I just try to go out to do the best I can to lead everyone, get on base, swing it pretty good hopefully, and get some wins," Van Huis said.

Last year's junior varsity had several players that know the Bridge City system who are expected to move up and will supply some new Cardinals to the varsity. A few freshmen may be sprinkled into the mix of players on the varsity although Landry said it is still too early to tell.

There are Cardinals with some varsity experience who will play significant innings. JS Bearden will seek a bigger role this season. JT Fielder is recuperating from knee surgery on his ACL and will get back in the lineup at first base and as a designated hitter when he returns.

Draven Marlowe played on the varsity last year and will be a regular in the infield for the Cardinals this year. "As far as new guys we're just waiting for one or two more to step up. We've got about eight or nine guys we're looking at for about one or two spots," Landry informed.

The Cardinals have a lot of batters that will put the ball in play and that could lead to runs on the board for Bridge City. They also know how to run the bases and move runners along which should help compensate for an apparent absence of a big power threat in the lineup like the Cardinals have had the past several seasons.

The emphasis this year for Bridge City is to put the ball in play especially on the ground to make opposing defenses have to field it and throw it accurately to register an out. The young Cardinals love to run the bases and put pressure on the other team's defense by doing so.

Pitching prospects at Bridge City are in good supply. The Cardinals have several pitchers who logged nearly thirty innings last season. This should give Landry plenty of arms to choose from to be on the mound throughout this year.

Senior Trey Lovelace can really spin the baseball with his sinker and also throws a very effective slider. Sophomore Landon Reeves will be great out of the bullpen throwing sinkers and sliders. Landry indicates Reeves does not need a whole lot of rest before being called on to pitch again.

Braylen Collins is a junior who is verbally committed to play after graduation for the University of Houston. Collins has made huge gains in the off-season. Landry is proud of Collins' work ethic and what he has been able to do.

Collins could be the dominating force on the mound this season for the Cardinals with his big pitch being the fastball. "Definitely the fastball, just run it by people," Collins exclaimed.

A senior Ethan Oceguera has come back out to play baseball again. Oceguera of course is an all-round great athlete playing as a starter in football and basketball since he was a freshman. Landry evaluated, "He has been very impressive so far. We hope he continues to grow and could be a guy that could log a bunch of innings for us."

Expectations do not always translate into reality in the very tough baseball district in which Bridge City competes. Coach Landry admitted the district is loaded with quality teams which means every Tuesday and Friday the Cardinals will face a division one arm making each game a battle.

The goal up front for the Cardinals is to win the school's twenty-seventh district championship. Landry confessed it has been far too long since they have been able to change the championship banner at Chuck Young Field. "Everybody gets 21 outs in a game, so we feel like we've got enough outs that we can manage one more run than the opponent, and that's our mind set going into it right now," Landry concluded.

Bridge City will host its own tournament starting Thursday, February 24. Games will be played Thursday, Friday, and Saturday at Chuck Young Field.

The Cardinals will play in two more tournaments before the start of the district games. The Cameron Yoe Tournament is March 3-5 and the Jasper Tournament is scheduled for March 10-12.

The first district game for Bridge City is Tuesday, March 15, against Vidor. The game will be in Chuck Young Field at 7:00 PM.