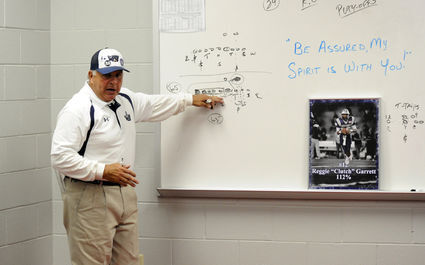 A crowd of around 150 invited guests were on hand Saturday afternoon at West Orange-Stark High School for the dedication of the school's brand-new Strength and Conditioning Center.

The modern complex, which would make most college athletic directors and head coaches green with envy, was named in honor of retired head coach Cornel Thompson, who not only coached football at the school for nearly 50 years, but also attended the school when it was known as the West Orange High School Chiefs back in the 1960's.

The only three head coaches the Mustangs have ever had since the merger of Lutcher Stark High and West Orange High in 1977-Steve McCarty, Dan Hooks and Thompson-were on hand for the dedication, along with newly-named Hiawatha Hickman, who was an assistant coach under Thompson for six years.

Also, on hand for the ceremony, were more than a dozen of former Mustangs coaches and many former players who wore the silver and blue uniforms in past years, including Kevin Smith, who has some Super Bowl rings from when he played with the Dallas Cowboys by way of the Texas Aggies.

The new strength and conditioning center is not just a weight room. It has an artificial turf area with 15 yards marked off where teams can run drills and plays during inclement weather. But there also is a large group of weight stations with the most modern apparatus.

A huge mural of three mustang stallions decorates the wall behind the weight apparatus with the side walls containing incentive words and phrases like "The way to Division I (D1) is to be D1in the classroom. D1 in the weight room and D1 on the practice field," and "It's Not Your Way, It's Not My Way, It's the Mustang Way."

Another states "Out of Yourself and Into the Team," and as you're leaving the weight room above the huge door frame, "The Greatest Loss in Life is the Loss of Enthusiasm."

Foreman said that many people have asked him over the years how the Mustangs can be one of the best teams in their classification year after year.

"WO-S started of as a good football team under Steve McCarty in his three-year stint and then Dan Hooks starting in 1980. But then came the 1983 season when we had the only losing season in the school's history and went 3-7 which lowered out winning percentage to 54 per cent.

"We decided right then that we're going to invoke plenty of discipline, hit the weight room more often and get rid of the guys who didn't buy into the new training ideas.

"And from 1984 until today, the West Orange-Stark football team has an 85 per cent winning percentage, which ranks THE BEST IN TEXAS and includes ALL classifications," he stated proudly.

When the man of the hour took the mike, Cornel thanked many of the people on hand for helping his career as a coach and teacher, he singled out Andrew Hayes who was a fellow coach way back when, then his principal and later the school district's superintendent.

During his early years as a coach, Cornel played summer baseball on the same team as I was. He was a catcher and I was a pitcher.

One time during a rather crucial moment of the game we were both in, I peered intently for his pitch signal and there he was dropping his glove on home plate, getting his catching gear off as fast as he could and high-tailing it to the parking lot.

Bewildered, I asked what was going on and was told that someone informed Cornel that his wife was having their first baby at the hospital and he was needed right now. And that's how his son Marcus came into this world.

Both of his sons, Marcus and Michael have been in the coaching profession which proves the apple doesn't fall far from the tree.

And parents would be pleased if their young athletes would have a coach like Cornel Thompson, who not only guides them on the field but also keeps a wary eye on them in the classroom.

And while on the subject of basketball, a melee broke out in Madison, WI. Sunday during the post-game handshakes after Wisconsin defeated Michigan 77-63 in a Big Ten match-up. Michigan's head coach Juwan Howard, who once played for the Wolverines, took offense after Wisconsin coach Greg Gard called a timeout with 15 seconds left and leading by 14 points. Howard took a swipe at Wisconsin assistant coach Jon Krabbenhoft which Big Ten officials promised to take swift and appropriate disciplinary action.

I was saddened by the sudden death of my good friend and former golf partner Kenny Ruane. He also was a marathon runner who always posted some of the best times for his age group and always gave me something to write about. He will be missed by many, especially the golfers at Sunset Grove Country Club.

Joaquin Niemann, a 23-year-old golfer from Chile, went wire-to-wire to win the PGA Tour Genesis Invitational in Los Angeles last weekend. He is the first wire-to-wire Genesis winner in 53 years and picked up $2.16 million for his second PGA Tour victory.

Expansion for the college football playoffs won't happen until at least 2026 and is set to remain a four-team format until 2025 according to the CFP management committee. But there's a real good chance that the recommended 12-team format will take place in 2026.

JUST BETWEEN US...It looks like to me that the start of the 2022 major league baseball season is in jeopardy of opening at the end of March like it's supposed to. The owners seem more interested in continuing to lock out the players until their money will be divided up to their satisfaction than getting spring training started on time. If you think the sport lost a lot of fans during the pandemic in 2020, just wait and see what happens if there's a lengthy strike. All stadiums will look half-empty like NRG Stadium did last year for football in Houston.