Longlois and Stewart rule the weekend on Toledo Bend 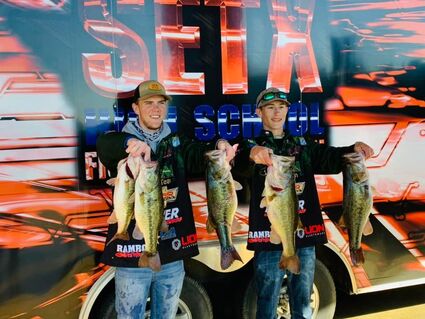 The LCM High School fishing team duo of Jacob Longlois and Tanner Stewart put a stranglehold on Toledo Bend this past weekend as they doubled up for victories on both Saturday and Sunday. The unusual circumstances where tournaments were held on back to back days was a result of rescheduled event from January being fished after the regularly scheduled event on Saturday. Longlois and Stewart posted a winning weight of 20.99 pounds on Saturday for their first win of the weekend.

On Sunday Longlois and Stewart continued their winning ways as they stuck to their pattern for most of the day and boated another impressive stringer weighing in at 23.49 pounds for their second consecutive trip to the winners circle. Both days saw the duo fishing jigs in deeper water and basically waiting the fish out until they fed. Small windows in which the fish fed heavily were the difference, especially on Sunday. During one small 30 minute frenzy Stewart boated a 7.4 pound largemouth and backed that up with a 7.2 pounder to seal the deal for their second win.

The LCM fishing team had several more quality finishes over the weekend as well. On Saturday the LCM team of Justin James/Gavin Cooper finished second place and took Big Bass honors with a healthy 8.63 pounder. Braxton Rambo and Cam Dougharty finished sixth with 14.86 While the teams of Istre/Ridgaway and Byerly/Henson were also in the Top 48 of 488 teams. A very strong showing by all the anglers and definitely a weekend that the pair of Longlois and Stewart will not soon forget.

Locally the conditions continue hold up as the lack of rain and lighter winds have kept both lake and the river looking very nice, especially for early spring. The best bite locally continues to be redfish as many anglers have taken advantage the bite along the shorelines. Swim baits and rattling corks have been the best bet when fishing this pattern. The key is covering lots of water and if possible fishing during the afternoon outgoing tides. I, like many other anglers, am waiting for the bite down on the big Causeway Reef or around Lighthouse Cove to get kicked off for the trout, it has to be close. Hopefully we keep these fantastic conditions because you just can't ask for any better right now. Get out and enjoy it and remember to take a kid or someone new to the sport next time you head out.