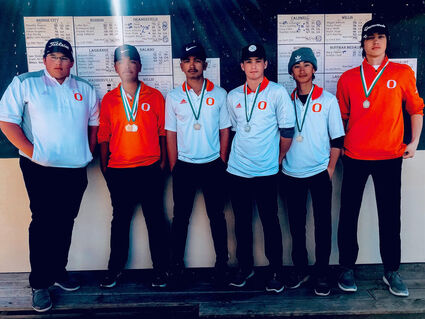 The Orangefield Boys Varsity golf team competed this past weekend, at the regional preview, being held at Sam Houston State's, Bearkat Golf Course.  This was a 2 day tournament where the Bobcats would take home 2nd place ,with a team total of 712. Day one, the Bobcats would shoot a team PB for the course, with a total of 368. On day two the Bobcats would improve ,once again shooting another PB for the course, posting a team total of 344. Both the Parks brothers were involved in a playoff that would determine the 1st, through 3rd place medalist. Lincoln Parks shot a 84 ,on day one, followed by a 78 ,on day two. He would prevail on the 1st hole of the sudden death playoff to wrap up the 3rd place medalist. Brother, Xander Parks shot a 79 on day one, followed by an 81 ,on day two. He would come up just short on the 1st hole of the playoff to take home the 2nd place medal. The team consisted of Xander Parks (79,81), Lincoln Parks (84, 78), Reese Johnson (103,94), Drew Tran 102,100), Brayden Burgess (113,91), and Ethan Gunter (108, 98). The Bobcats will be competing later this week at Henry Homberg, in Beaumont.