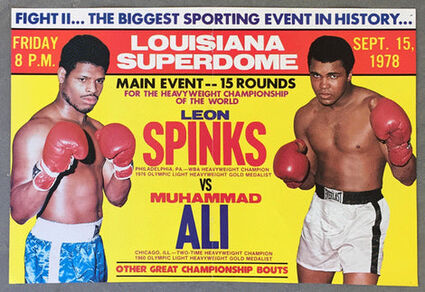 The Battle of New Orleans

I turned down Larry Messier's offer to be his guest at the Ali-Spinks heavyweight fight in Vegas and made my annual trek to Rising Star's Sipe Spring cemetery, that dates back to the Civil War, where my dad Clay, his parents and siblings are buried.

Leon Spinks shocked the boxing world and accomplished, against great odds, what he had told me a few days earlier he would do. He defeated world champion Muhammad Ali for the heavy weight crown. Ali was unable to knock him out and the younger Spinks, true to his plan, had worn the champion down in a 15-round bout, by letting him punch himself out.

Shortly after the fight, I received a call from Larry. This amazing guy, who represented Ali's manager, Hubert Muhammad, was already in Spinks' dressing room. He said Leon was beaten up pretty badly and couldn't talk, but he would have him call me later. The dressing room, he said, was in elated chaos. He said the Spink win wasn't bad money-wise; the rematch would be the biggest fight ever. Larry who was also a friend of Butch Lewis, who managed Spinks, said the problem now was that the promoters, managers and sanctioning bodies who for so long had to bow to the will of Herbert Muhammad, were in a position to "freeze Ali out." It seemed like Ali would never have the opportunity to make history and become the first heavy weight to win the crown for a third time. Spinks had made history by becoming the only man to win the world heavy weight championship in only his eighth fight.

The public wanted a rematch, but Spinks was stripped of the WBC belt when he refused to fight Ken Norton instead of Ali. The WBC belt, promoted by Don King, would be disputed between Ken Norton and Larry Holmes. According to Larry Messier, who had ties to both sides, Ali had given Lewis, Leon's manager, his start in the boxing game and Lewis felt obligated to return the favor to Ali. Spinks and Lewis held firm and signed to fight Ali for the WBA belt and linear championship.

My partner in Triangle Press, attorney Gene Wright, was the overseer of the contract drafting, making necessary changes. He let me know that the rematch would take place in New Orleans on Sept. 15, 1978. History was made again that year when Leon's brother Michael, beat Larry Holmes for the WBC belt. Michael and Leon became the first brothers to win the WBC belt in the same year.

I was pursuing the pioneering of the Community Post in Port Arthur. This newspaper was an overnight success and ultimately led to the sale of three newspapers, Opportunity Valley News, Community Post, and Consumer Beacon and all Triangle Press holdings to Cox Communications, owners of the Port Arthur News. I was practically working around the clock; days and sleepless nights often ran together. The tiger's tail I was holding didn't allow for entertainment time, so when Gene called and said Larry had six ringside tickets to the big fight in New Orleans, I was reluctant to accept because of the work load.

A few days before the fight I accepted the available tickets. It would be Phyl's birthday and a great way to celebrate it. The only problem was that by then, lodging in New Orleans was impossible to come by. Larry exhausted every connection he had to no avail. I had just one more string to pull. Paul Hardy, a Cajun boy from Cecilia, near Breaux Bridge, was the Louisiana Secretary of State at the time. I contacted him and he called back to say he had us two previously unavailable rooms in the French Quarters. We had met Paul earlier when he was running for Lt. Governor and had flown to Orange County for a secret Texas fundraiser at W.T. and Ann Oliver's home. Phyl and I had taken him to Brown Airport after the event for his return trip to Cajun Country. His Cajun superstition wouldn't allow us to leave the airport until the private plane was out of sight.

Lucky, Gert, Butch and Edna Lusignan, Phyl and I motored to New Orleans. Lucky and Gert sponsored a couple of birthday parties for Phyl, one at the Hilton Rainforest, 29 stories up, overlooking downtown New Orleans and also a dinner party at Hooligans.

Describing the extravagant surroundings of the 'Battle of New Orleans' is virtually impossible. The thought of Ali becoming the first man to win the heavyweight championship for a third time really caught the public's imagination and 64,000 fans packed into the Superdome. People were lavishly dressed in formally attire.

It was Ali's show. No one else seemed to matter at ringside, where super stars including John Travolta, Sylvester 'Rocky' Stallone, who wore a pure white suit with no shirt beneath, Liza Minnelli, Hugh O'Brian, Lorne Greene, Johnny Cash, Red Fox, Kris Kristofferson, Waylon Jennings, Joe Namath, WBC heavyweight champion Larry Holmes, former champs Joe Frazier and Ernie Terrell, and more than I have space to name. Howard Cosell was calling the fight for ABC.  Later at the Hilton, 'Sly' was seen sweet-talking Orange beauty, Diane Hill. Husband Brooks was cool, he took it good naturedly and gently steered her away.

Spinks' manager, Butch Lewis, had his hands full controlling his champion while preparing for the Ali fight. Spinks had been arrested for possession of cocaine and had broken training camp rules. Mr. T was one of Spinks bodyguards. Ali was not in the poor condition he had been in for the first fight. By round five he began to find his range, stayed in the middle of the ring, teeing off on Spinks. When he charged, Ali simply grabbed hold of him until the referee broke them apart. The fight was slow, but Ali gave Spinks a lesson on ring craft. History was made when Ali took a clear decision and the title for the third time. Nine months later, he announced his retirement from boxing.

Messier had told us to come to the Hilton after the fight to meet Ali, who had taken over an entire floor. That was impossible because the lobby and elevators were jammed. Everywhere you looked was a big star. Boxing champion Sugar Ray Leonard had a bigger entourage than Ali did. I had never seen so many stretch limousines. Rolls Royce's were even common.

As we milled around the lobby we visited with many interesting people and took a birthday picture of Phyl in front of a large ice sculpture. It was impossible to get food or drinks. After midnight a long white van from Tony's backed up to the front door and two men dressed in chef outfits got out and asked where to deliver the Italian food for Ali's party. I cleaned some room and told them to set it down, we would get it delivered. I signed the ticket and wrote a $100 tip on it and then shared the Italian bread and food with everyone around, who made finger food out of it. We all shared the food but Phyl, who was extremely nervous over what I had done. Needless to say, my wife had an interesting birthday.

The years have gone by; Lucky, Gert and Butch have all died; Edna has remarried and lives in Beaumont. Our friend Larry Messier died of a heart attack, Paul Hardy lost his bid for Lt. Gov. in a runoff. My partner Gene lost his wife, child and mother-in-law in Missouri when a tour boat capsized. He is now semi-retired and still has his law office in Cleveland. Spinks, died Feb. 5, 2021. Ali for many years had been afflicted with Parkinson's Disease. He died June 3, 2016, at age 74.

So it is, another chapter Down Life's Highway. I have a bag full of stories to tell, one is a never before brought to light story of national interest that warrants a better writer than me to tell. Only my old black friend, Jessie Jerkings, and I are left to tell it. I spoke with him this week. He celebrated his 87th birthday, Tuesday, March 1. Over the years, I've mostly written about my humble childhood. I had avoided today's type of stories in fear that they would be viewed by some as self-serving. My plans were to tell my tales in a book. I realize now I will probably never write it so I've taken the privilege of going this column route. I've lived a very charmed life and I'm proud of the fact that I've spent most of it with one wife. I've taken her for quite a ride, way more than she bargained for.

Now that we have gotten into our latter years, we can fully appreciate the trip, the people we've met and the friendships we hold so dear. Most of our kin are gone now, but we treasure each day with our remaining small family.

Phyl and I mostly just hang out together at the house reminiscing about the last 67 years. I can still make her laugh. What a trip. 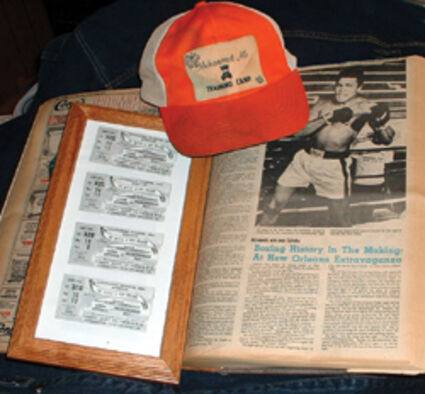