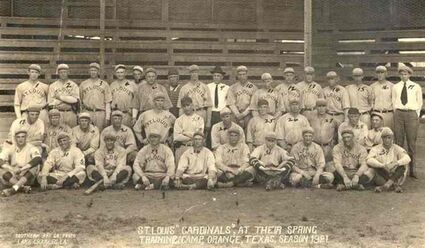 One hundred years ago this month, people in Orange had a choice spot for Major League Baseball spring training. The St. Louis Cardinals were in town for their second time to practice for the upcoming season.

The two years in Orange were good for Hall of Fame player Rogers Hornsby, a native of Winters, Texas. After his first spring training camp in Orange in 1921, he led the majors in batting with a .397 average. The next year, in 1922, Hornsby won a rare triple crown in the National League. He finished at the top in home runs, batting average, and runs batted in.

The two spring training years in Orange weren't as good for the Cardinals. They finished third in the National League pennant race both times.

Rickey biographer Lee Lowenfish wrote "Rickey decided to move away from the border town of Brownsville, probably because he did not want the players unnecessarily tempted by nocturnal distractions." So Rickey moved the Cardinals to Orange.

Timber heir and developer H.J. Lutcher Stark was 33 years old in the spring of 1921 and formed the Orange Athletic League to build a baseball park for attracting a professional team. Rickey chose Orange.

West End Park was constructed behind Orange High School, which faced 14th Street at Green Avenue. The new baseball field was along 14th Street between Pine and Cypress avenues. It was originally surrounded by a wooden fence and covered wooden grandstands were built behind home plate. Players had real "dugouts" built into the ground with steps leading to the benches.

The park and baseball field remained for some 80 years and generations of high school and youth league players used it. The West Orange-Cove school district, which ended up owning the field, tore down the bleachers in the late 1970s. The last dugouts were removed and the field was covered in 2010. A Texas Historical Marker installed in 2016 is dedicated to the field and can be seen at the entrance to West Orange-Stark Middle School on Green Avenue.

The St. Louis grounds manager arrived in Orange on February 4, 1921, to inspect the new field, the Orange Daily Leader reported. Workmen were making adjustments on the batting cages after orders from Rickey.

The team gathered in Orange on February 28, 1921, with players arriving at the Southern Pacific train depot on Green Avenue. Their first pre-season game was against the New York Yankees, which has led to tales of Babe Ruth playing at West End Park. But he did not.

That first game of the Cardinals and Yankees was played in Lake Charles, arranged by Connie Mack, who was owner-manager of the Philadelphia Athletics. The Athletics had spring training in nearby Lake Charles, Louisiana.

Southern Pacific Railroad ran a special train from Orange to Lake Charles for the game, according to the newspaper. It was an exciting match for baseball fans. Ruth had led the American League batting average in 1920 and Hornsby had led the National League.

The Yankees won 14-9 with Ruth getting a home run in five trips to the plate. Hornsby walked once, had a sacrifice, hit a fly for an out, and hit a single. Nearly 2,200 people attended the game.

The Cardinals stayed at the grand Holland Hotel in downtown Orange and were treated like royalty, especially Rickey and Hornsby. They were guests of the Rotary Club.

Spring training went well in Orange for the Cardinals in 1921 with nice spring weather and clear skies. The next year was different.

Again, the team arrived on February 28. But the weather across the region was cold and rainy. The Daily Leader said night temperatures were so low films of ice formed on top of puddles and mud. The Cardinals even had to cancel a scheduled pre-season game in New Orleans that first week because of weather.

Also, oil had been discovered 10 miles west of town in the Orange Oil Field. Orange had become a boom town with a different atmosphere than in 1921. One night, a man shot his wife to death in Fifth Street a few yards from the hotel.

The Rotary Club held a luncheon for the Cardinals and Connie Mack's Athletics at the Holland Hotel that year. Rotary members then used their personal cars to drive members of both teams across the wood-plank roads into the Orange Oil Field so they could see the sites of the wells being dug and the landscape of wooden oil derricks.

The biggest news in 1922 came on March 24 when Baseball Commissioner Kenesaw Mountain Landis arrived by train to see the Cardinals play. Mayor W.E. Lea even declared a half-holiday in Landis's honor.

Landis was a federal judge when he was appointed the first baseball commissioner after the 1919 Black Sox scandal of the World Series.

After he arrived in town, he had what the newspaper described as a "hearty breakfast." Then he wanted to play golf. That request led to him making local history. He was in the first foursome to play at Sunset Grove Country Club.

Lutcher Stark had built the Donald Ross-designed course and private clubhouse, but it had not opened, yet. Who was going to deny one of the most famous men in America a chance to play on a course by a legendary designer?

The commissioner apparently enjoyed his stay in Orange and said the Cardinals would be back the next year. However, Rickey decided differently. The March 24, 1922, game at West End Park was the last the Cardinals had in Orange. They never returned.

Hornsby, Rickey, Mack, and Landis all are in baseball's Hall of Fame and were at West End Park. Also playing on the field was George "Specs" Toporcer of the Cardinals, credited as the first player to wear eyeglasses during a game.