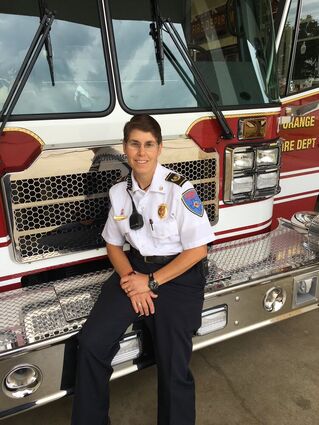 Deputy Fire Chief Lee Anne Brown, has retired from the Orange Fire Department after 30 years and will be joined as a pensioner by Fire Chief David Frenzel, who retires in April after 53 years with OFD.

The City of Orange is saying goodbye to its top two firefighters in the next six weeks and plans are being made to find their replacements.

David Frenzel announced last year he is retiring near the end of April after 53 years with the Orange Fire Department, the last 25 as Fire Chief.

"Everybody says you'll know when it's time, and I knew it was time," she said. "I prayed about this. The Good Lord opened the door and I walked through it."

Brown, who was also the city's emergency management coordinator since 2014, plans to continue her firefighter career in industry, working for the Chevron Phillips plant on FM 1006.

Orange City Council held a closed meeting last week to discuss how they would handle staffing the Emergency Management position until Brown's replacement is announced.

Mayor Larry Spears Jr. said it was agreed there would be no "interim" EMC.

"I don't know if you know it, but in our charter, the Mayor is also an Emergency Management Coordinator," said Spears, who works in Health and Safety at the Dow plant.

"But we normally delegate the job" to a member of the professional staff.

"You can expect an announcement on what we're doing soon."

As for filling Frenzel's fire boots, Mike Kunst, Orange City Manager, says he plans to post the vacancy "sometime in March and have it posted 30 days. We will open it up to internal and external candidates.

"We didn't want to be have an interim Fire Chief for a month while Chief Frenzel was still here."

John Bilbo, the current Fire Marshal, has over 20 years with the department and will be interim Chief if the hiring process stretches past April, Kunst said.

"With John Bilbo and the battalion chiefs, we've got a lot of experience with our senior staff," he said. "Even without Chief Frenzel and Chief Brown, we're in good hands."

Kunst says he may include others in reviewing candidates.

"The process is normally I nominate someone and the council approves them," said the city manager. "I anticipate forming a small committee to help, but ultimately, it will be my nominee that goes forward.

"I want to hire whoever's going to be the best Fire Chief for Orange. I do not expect the next chief to be here for 25 years like Chief Frenzel, but I want somebody that's going to be around for a while."