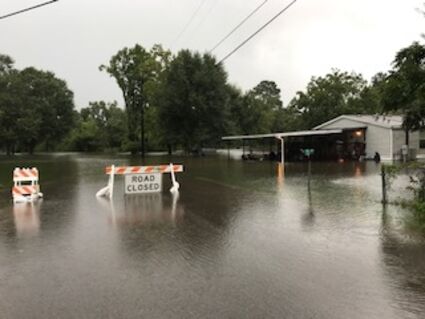 Tropical Storm Harvey inundated Orange County in August of 2017. In the five years since then the City of Pinehurst has been working to repair the damage from the record flooding and prepare its community for the next possible disaster.

A big step towards recovery from Harvey for Pinehurst was the approval of a $6.8 million grant from the Texas General Land Office (GLO) to repair infrastructure damaged by the flooding from the storm. The mitigation grant was approved in February 2020.

City Administrator Jerry Hood replaced his brother Robbie as the leader of the Pinehurst city government in 2020 the same year the grant was approved. "This project was submitted to the General Land Office post Hurricane Harvey. Eventually a $6.8 million dollar grant was approved and there was a lot of administrative actions and things that had to be taken care of like procurement of engineering services, administrative services, but in 2020 the operational side pretty much began," Hood reminded.

David Waxman & Associates were hired as the grant administrator. Schaumburg & Polk was approved as the supervising engineers for the project.

The $6.8 million was used in three phases to repair damage caused by the storm. The first phase was pipe bursting and repairs to sewer lines in Pinehurst. Phase 2 was repaving and resurfacing streets that had been flooded during Harvey. The third and final phase is an upgrading of the electrical controls at the Water and Wastewater Treatment Plant for the city.

The pipe bursting and sewer repairs included 21,350 feet being replaced by Texas Pride Construction according to Wastewater Supervisor Charles Spain. The repairs included 250 houses. This phase added 23 new manholes and replaced 59 other manholes that effected about 60 percent of the city.

Spain described the benefits of the pipe bursting for the citizens of Pinehurst. "Getting all these sewer lines replaced is going to help get everything flowing better and getting it to the plant faster so they don't have to worry about having sewer issues when heavy rain comes and stuff like that which we did have before," Spain explained.

The sewer and pipe bursting phase is nearly complete. The crews are doing their post video surveying of the sewer lines to ensure all the pipes are secure and there are no breaks in the lines.

The GLO project was done in successive phases to allow workers to get areas done while not disrupting other work being completed. Street repairs began in October 2021 under the supervision of Gulf Coast Construction.

Almost every road in Pinehurst was underwater after the torrential rains of Harvey. The inundation of those roads caused damage to the surfacing especially after vehicular traffic resumed on them. Eight to ten miles of the streets in the city required work to make them useable.

About 80 percent of the roads in the city are now asphalt following the resurfacing done as part of the GLO project. Assistant Public Works Supervisor Greg May said approximately six to eight roads that were not flooded and are still in pretty good shape were not repaved with asphalt.

May informed that the contractors have completed almost all the streets assigned them to resurface except Park Avenue which runs the length of Pinehurst. "They're sealing it, they're sealing cracks, making some repairs, and then they're going to overlay it," May indicated.

It is hoped that in the next few weeks those final steps to repair Park Avenue will be completed. May added, "On the rest of the streets they're going back behind themselves and dressing up shoulders and other sections for the streets that they've already done. Then they've got a crew that's working on Park putting sealing in the cracks and then they'll do that overlay."

The Wastewater Treatment Plant electrical control room had three feet of water in it following the flooding from Harvey. It was located in a low lying area that compounded the effects of the rising water from the rain.

All new electrical connections are being run to the more elevated and upgraded plant which hopefully removes any chance of the facility being flooded again. A brand new blower room will be included in the recently constructed building for holding the control panel.

Spain estimated the new electrical control panel and blower room being installed by Doughtie Construction should be completed in June 2022. Contractors met the first week of March to discuss the design for the blower room. The main part of the Wastewater Treatment Plant will remain where it is and is not being replaced.

The original deadline for completion of the three-phased GLO grant project was to be April 2022. Shortages of supplies attributed to the pandemic the last two years has caused Pinehurst to request an extension to that deadline.

The $6.8 million for improvements to the infrastructure of Pinehurst will benefit the citizens living there greatly. "It significantly improves the quality of life for our citizens that they deserve," Hood assured.

The new electrical panel and blow room replaces much older equipment at the Wastewater Treatment Plant. Spain analyzed, "With everything as old as it was and being flooded there's no telling when it was going to go out. Replacing it keeps the plant going, so there are no issues for the future during the next storm we can keep it up and going to make sure people are still able use their sewer."

The completion of the pipe bursting will greatly reduce the inflow and infiltration in the sewer lines caused by rain water. This had been a problem with the deteriorating of the system before the GLO project.

Pinehurst has completed another sewer project for the streets of Enchanted Oaks and Mockingbird Street. To-Mex Construction was the contractor overseeing this project that was separate from the one with the General Land Office. Spain detailed, "On Enchanted Oaks and Mockingbird we had 33 houses that had their sewer lines replaced about 2500 feet of sewer line, and that job was actually completed as of March 2."

Drainage improvement is another important component in hazard mitigation. Hood replied, "About ten drainage structures are being improved. There's still much needed repair, but our goal is just to try our best with what we have to improve the drainage for our city until we're in a better position to where we might be able to get a grant to come in here and do what we know that needs to be done." 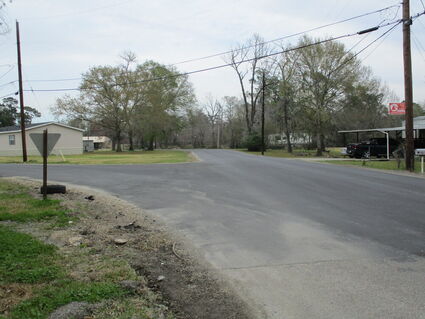 Martin Street after being paved with asphalt

While all the infrastructure projects have been underway Pinehurst has been working to establish a cleanup initiative citywide. Hood divided the city into multiple regions and then worked with residents and business owners in each zone to clean up their properties which he said is about 80 to 90 percent complete.