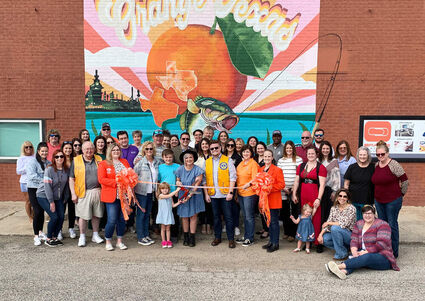 Artist Lauren Leigh, in hat at center with daughter Brynleigh and son Kip at her side, cuts the ribbon as the Orange Lions Club formally unveils its first downtown mural on the side of the Orange Stationer on Friday, March 4.

Lauren Leigh's work is all over town and now it's not only decorating downtown Orange but looming over it.

Paul Dickerson, owner of the Orange Stationer, held a ribbon-cutting last Friday, March 4, for Leigh's latest and definitely largest work, a 20-foot high mural on the 6th Street side of his store at Division and 6th.

"This is an awesome, awesome mural," Chris Kovatch of the Orange Lions Club said to a gathering of about 50 people.

It looks to the west upon the Orange Boardwalk and Riverfront Pavilion.

"We were very honored to be a part of it," said Dickerson. "We're happy our location was fitting, being across from the park.

"I really want it to be a destination."

Leigh's mural features a giant orange in the background along with the words "Orange Texas" in script and a sky streaked with orange, red and pink.

In the foreground, the sidewalk has been painted to resemble a wooden dock and a fish hooked on a line to a rod and reel jumps out of water.

"Good things happen here" is inscribed at the bottom.

Leigh's artwork on display includes a mural at the Orangefield High School library, in front of Hair & Co. on Strickland Drive and in area nursing homes.

"This is the largest one I've done where people can drive by," she said.

But the mother of two originally from Houston has also painted no fewer than 40 of the large concrete oranges sold in recent years by the Greater Orange Area Chamber of Commerce.

Besides one painted to look like a rubber band ball at Orange Stationer, some of her favorite oranges include ones at the Orange Public Library, Spanky's Restaurant, Chevron-Phillips and Rambo Outdoors.

Leigh said she and her family moved to Orange eight years ago.

"But it's only the last two years I'm getting to paint full-time," she said. "I enjoy working outside, painting store windows, murals and oranges."

An interior design major in college, Leigh said she took only one art class in high school, but said "painting is my passion since I was a little kid.

"No job ever seemed like the right fit for me. Painting is what I've always wanted to do. I moved here and this community wrapped its arms around me."

She said she worked about five hours a day for 22 days on the Orange Stationer mural. 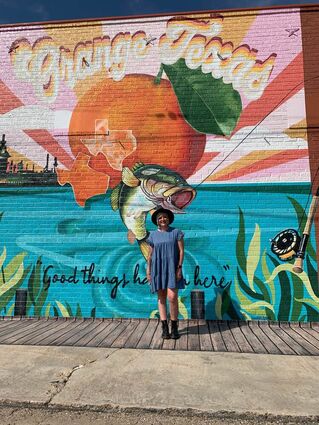 Lauren Leigh, Orange artist, poses in front of the mural she completed recently in front of The Orange Stationer.

The project was funded by the Lions Club with grant money from the Orange County Hotel Occupancy Tax.

"Their funds are earmarked for special purposes," explained Kovatch. "One is for the promotion of the arts.

"This mural is actually from 2021 HOT funds. We've already been approved for another mural project. We're in the very early stages of designing it.

A banker, Kovatch has quickly made a name as one of the city's rising civic leaders. He and Orange City Councilman Brad Childs co-chaired the Orange Chamber's Orange Grove, which sold about 150 of the knee-high concrete oranges to businesses and homes in the area and a number of smaller ones, too.

"They want to put murals all over," Leigh said, "and make a (online) map like they did with the oranges, so people can go see them."