By Dave Rogers
For the Recorde 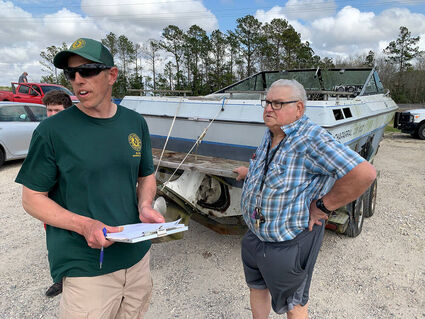 Nelson Plaisance trailered the 23-foot eyesore from his yard in the Cove to the Collection Station at the Orange County Landfill Saturday afternoon.

It was time to let 'er go and the Vessel Turn In Program being run by the Texas General Land Office at the FM 1442 location was the perfect opportunity to say goodbye to the boat that wouldn't even run to his mailbox for 15 years or more.

"A friend of mine must have seen it in the paper and I found out from his post on Facebook. I figured it was a good time to get rid of my old boats.

Plaisance brought the 35-year-old fiberglass pleasure boat to be junked Saturday. He plans to be back this week with the second junker that he long ago stripped for parts.

The Orange County VTIP ends March 12, but plans are to make it an every-year event.

There is no cost to turn in old boats and the process takes about 30 minutes or less.

"The response has been pretty good for a first-time offering," said Craig Cook of the GLO's Oil Spill Prevention and Response Team.

A total of 25 vessels, five of them pulled from the water, were turned in by noon Saturday, midway through the third of six days the program is running in Orange.

It's a priority of Cook's Oil Spill Team because oil spills are one result when owners abandon derelict boats in waterways.

The program so far is limited to coastal cities and counties.

"We would like this to be an annual thing," he said, "and we hope that over time, the numbers will go down to a point where we can handle each case individually."

Representatives from the Oil Spill Team will greet those bringing boats and ask for a title. They will then check their records and those maintained by Texas Parks & Wildlife Commission to be sure the boat is not stolen.

"If they don't bring us the title, then they need to tell us the story of the boat, how they got it and where it's been," Cook said.

"If they say it's been on my property for 15 years, we go on Google Earth to check that it was."

The boats turned in will be checked for fluids remaining in lower units, Cook said, and any gasoline left in the fuel tank will be removed.

The last step is to crush the boats with Landfill equipment and place it in containers that will be trucked to its final destination in Jasper County. 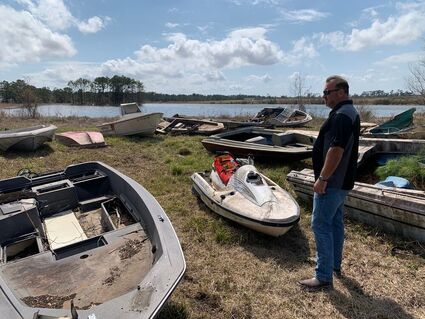 Craig Cook of the state's Oil Spill Response Team shows off some of the 25 watercraft taken in at the Orange County Citizen Collection Station during the first two of six days of a Vessel Turn In Program.

Cook said the cost to remove a vessel from the water can go as high as $250 per foot, but the cost to crush a boat and take it to a junkyard can be as little as $12 per foot.

The GLO, in a news release about the program, says the program has led to the disposal of 1,676 gallons of fuel, the removal of 17,372 linear vessel feet and a projected coast savings of $8.6 million for state and local governments.

Cook pointed out that the Orange County program was set up to operate during normal operating hours for the Citizen Collection station, causing no overtime pay for the county.

Prior to Orange, the program took in boats in Galveston and Corpus Christi. Corpus Christi and Harris County upcoming on the VTIP schedule.