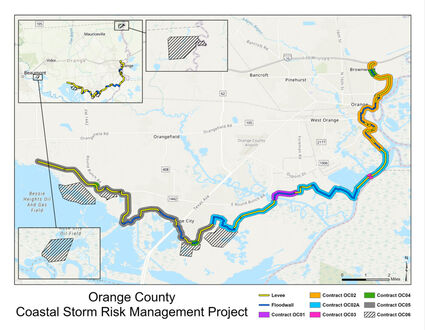 The U.S. Army Corps of Engineers issued this preliminary map of the Orange County Coastal Protection wall with a 2017 Feasibility Study. Yellow lines are for earthen levees, blue for floodwall. The Corps and the Jefferson County Drainage District will present and detail updated plans in a series of public outreach meetings in Orange County in late April. The latest timeline shows construction on the $2.4 billion project starting in 2024 with completion in 2028.

Planning and design work is moving along steadily for the Orange County end of the federal Sabine Pass to Galveston Bay Coastal Storm Risk Management Project.

Times and details will be announced soon.

"During these meetings, the Corps will present a detailed alignment," Don Carona, general manager for the Drainage District, said of the 27-mile project that will include levees and floodwalls beginning at a location south of the intersection of FM 1335 and Highway 105, then wrap to the southwest around Bridge City, and then along the Sabine River north to Interstate 10.

The levee alignment available on the internet is from 2017 but the Corps of Engineers says it will be updated online soon.

"The alignment is not yet fixed for every area of the project, but probably for 80 percent at least," Carona said. "There will be small tweaks to alignment going forward, but we want to share the details of the project and its benefits to the community and also listen to their concerns."

The good news for Orange County: "As of right now, almost all homes are on the protected side," Carona said.

"The primary goal of this project is to protect Orange County from a storm surge of the magnitude of Hurricane Ike, or even greater. At the same time, we are working very closely with the Corps on the matter of interior drainage to ensure that the levee project will not worsen drainage.

"I believe the project will actually improve drainage in some areas under various conditions," Carona stated.

Most of the land needed for the $2.4 billion Orange County end of the $26 billion coastal protection system is already government land (state or local) or industrial properties and will limited acquisitions from private landowners.

That proposed track begins north of the Bessie Heights Marsh, runs along the west side of West Roundbunch Road, jogs around the Entergy power station and crosses Texas 87 near the LaQuinta motel.

Then it skirts Bridge City on the south and east sides, winding around south of the chemical plants on DuPont Drive and running along the north and west sides of the Sabine River to downtown Orange.

From there, it goes around Lamar State College-Orange and up between Simmons Drive and the Sabine River.

Corona says the "design" phase of the Orange County project will continue until 2024, when construction is scheduled to begin.

The tentative completion date is 2028, according to a Corps of Engineers presentation on its website at swg.usace.army.mil . (Click on the third tab [S2G] on the right side, then choose the Orange County project.)

"It may take a little longer than that on construction," Carona warns.

Orange County and the Drainage District has worked closely with the Corps of Engineers on the design if the project, and that cooperation means Orange County will be getting at least two more pump stations – for a total of at least nine – as opposed to the seven called for in a 2017 feasibility study.

"In some areas, the pump stations will be larger than originally planned and when the gates are closed, we'll be pumping water from the inside to the outside. No matter how high the water gets on the outside of the system, we'll continue to be pumping it from the inside."

This project has been in the study and design phase, essentially, since 2008, when Hurricane Ike decimated Orange County. The Corps of Engineers has also recently issued a feasibility report for a coastal storm protection system in the Galveston, Bolivar, Houston Ship Channel area.

This project was originally nicknamed the "Ike Dike" by Texas A&M University scientists. The project has also been referred to as "The Coastal Spine."

By whatever name, its main intent is to build giant floodgates to protect Galveston Bay and the Houston Ship Channel areas from catastrophic surge events and to beef up levee systems already in place in Freeport and Port Arthur and build one from scratch for Orange County.

Orange County leaders immediately recognized that like coastal surge, Orange County can suffer historic flooding caused by slow-moving rain storms (Hurricane Harvey, Tropical Storm Imelda). Because of the fear that a levee system could serve to trap water inside, the county and Drainage District have been significantly involved in the study and design of the levee project.

The Orange County plans posted on the Corps website at the start of March (which will probably be soon updated) show 15.6 miles of new levee 12 to 17.5 feet tall, 10.7 miles of floodwalls 13.5 to 16 feet tall with 56 drainage structures, 32 closure gates across roads and railways and two navigable sector gates, one each in Adams Bayou and Cow Bayou, to reduce surge penetration.

Work on the Port Arthur portion of the Sabine Pass to Galveston Bay Coastal Storm Risk Management has already begun.

In Jefferson County, a levee already exists running from just west of Jack Brooks Regional Airport south along Taylor's Bayou to the Intracoastal Waterway seawall around Port Arthur and up into Groves west of the Neches River.

The project there is to heighten existing earthen levees and floodwalls. Total estimated cost for improvements in Jefferson County is $863 million, with the federal government putting up $561 million and Jefferson County Drainage District #7, the non-federal sponsor, paying $302 million in a 65-35 cost-sharing split.

The Orange County project is also being funded by a 65-35 cost share, with a non-federal sponsor expected to pick up $836 million of the cost over 30 years.