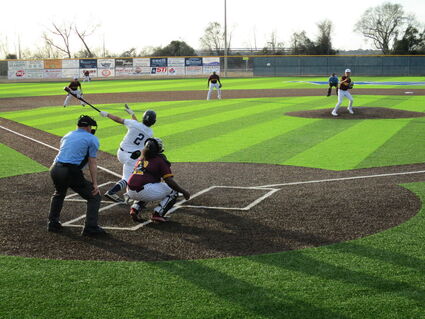 The annual Certa-Bearden West Orange-Stark Classic was held March 3 through March 5 at Ronnie Anderson Park. The West Orange-Stark Mustangs hosted the tournament joined by the Little Cypress-Mauriceville Bears, the Buna Cougars, the Jasper Bulldogs, and the Beaumont United Timberwolves.

The Mustangs started well in their first game against United scoring two runs in the first inning. Derrick Williams got a leadoff single moved to third on a stolen base and a ground out before scoring on a single by Tyrone Wilson. Two errors allowed Wilson to score giving West Orange-Stark a 2-1 lead after one.

The Timberwolves tied the game in the third, and the Mustangs scored again in the bottom half of the inning to retake the lead. Carlos Calana was hit by a pitch. He scored when William Lee drove a pitch to the fence in left field.

Starting Mustang pitcher Grayson Gregory pitched well before getting into a jam in the fourth inning during which the Timberwolves tied the game. Zach Nation took Gregory's place on the mound and gave much needed relief when he struck out back-to-back United batters with the bases loaded to end the threat.

Unfortunately, the Timberwolves tallied a run in the fifth and three runs in the sixth to win the game 7-3. "We competed in that game. We scored three runs, the most we've scored all year long," Coach Sergio Espinal responded.

The other two games for West Orange-Stark in the tournament were not as close with the Mustangs losing to both Buna and Jasper. Espinal reminded, "Again it's a rebuilding year. We're going to get better. Our pitching is getting better, but we've still got to improve a whole lot."

West Orange-Stark plays four home games at Ronnie Anderson Park from March 10 to Saturday, March 12. The Mustangs have a bye in district on Tuesday, March 15, and start their district games at Little Cypress-Mauriceville on Friday, March 18.

Little Cypress-Mauriceville won two of the three games it played in the Certa-Bearden tournament. The Bears lost 10-6 in their opener to Buna. They also lost the services for about two weeks of second baseman Pierce Brown who fractured his right pinky finger during a head-first slide at second base.

The Bears rallied for four runs in the seventh and actually brought the tying run to the plate before registering their final out. The other highlight was the 13 strikeouts registered by LCM pitchers Marco Bandiero and Brice Frenzel in six innings.

Friday's game was more of a pitchers' duel, and the Bears' Dean Reynolds was superb earning a 4-2 win over Jasper. Reynolds pitched six innings yielding only two runs. "Dean really pitched probably the best that I've ever seen Dean pitch. He competed the whole game, it did not matter what the score was, didn't matter where the guys were, he competed, he fought through it, and he did everything he needed to do," Bears' Coach Hunter Hagler evaluated. Parker Seago got a save throwing a scoreless seventh inning.

The top of the Bears' batting order accounted for the offense. Leadoff batter Seago was the initial Bear batter in the first, the third, and the fifth innings when Little Cypress-Mauriceville scored in each of those innings. Blaze Compton and Ashton Landry combined with Seago rapped six hits and scored all four runs for the Bears.

The third game for LCM was the highest scoring game for the Bears in the tournament. The Bears defeated United 15-7 in a shortened four inning game because of time limit restrictions. Gage Griffith pitched three innings of relief to pickup the win in the game.

With the score 4-3 in favor of the Bears designated hitter Cameron Bilbo leadoff the bottom of the third and was hit by a pitch. Bilbo scored the first of 11 runs for LCM in the inning. Gunner Johnson drove in Bilbo with a single and then hit a grand slam later in the same inning.

The win over United made Little Cypress-Mauriceville 6-5 with a tie on the season. Hagler analyzed, "I think that we're constantly improving each day, we're getting better every day, and I think that's what it takes to wind up being a successful team."

The district season starts Tuesday, March 15, at Lumberton. The Bears play the Mustangs on Friday, March 18, at Don Gibbens Field.

The Orangefield Bobcats competed in the Nacogdoches tournament March 3-5. The Bobcats finished with three wins and a tie over the weekend.

Orangefield picked up a 9-1 win against Mount Pleasant before besting Bullard by a score of 3-2. The Bobcats topped Tatum 9-1 and tied 4-4 with the host-team Nacogdoches. "I thought we played pretty well. I think for sure Nacogdoches was the best team we played and came away with a tie, we had a chance to win it at one point, but those are the kind of games that are going to get us ready for district so that was the big plus there," Coach Tim Erickson of the Bobcats replied.

Pitchers Trent Eaves and Coop Longron picked up wins on the mound for the Bobcats. Brycen Tait was called up from the junior varsity and earned the third win in the tournament for Orangefield. Kolbie Sowell recorded a save against Bullard.

Jason Bodin led the Bobcats offensively going 5 for 7 on the weekend with 4 runs batted in, including a base-clearing triple in the game with Tatum. Kameryn Henderson and Kyle Michael continued their hot streaks racking up 6 hits apiece for the tournament. The catching duo of Macoy Marze and Rusten Traxler were lights out behind the plate allowing zero stolen bases and throwing out two would-be base stealers for the tournament.

Orangefield moved to 8-0 with a tie on the season. Erickson indicated, "I think this week is about taking care of us, just making sure we're doing the basics, playing our best baseball heading into district really is kind of the goal regardless of who we're playing just make sure that we're sharp on everything that we're doing."

The Bridge City Cardinals remain undefeated on the season after winning all four of their games in the Cameron Yoe Tournament. The Cardinals are a perfect 9-0 on the year. "Our record is what it is, we've been in some tight ball games and games where we had lost late last year we're finding a way to scratch and claw to win those games this year early," Bridge City Coach Chad Landry emphasized.

The Cardinals rallied from an early three-run deficit to defeat the Taylor Ducks 4-3 on Thursday, March 3. The next day on Friday, Bridge City blasted two opponents. The Cardinals shutout the Greenwood Rangers 11-0 and clobbered the Columbus Cardinals 13-4 in their other game that day.

Another tight game was played on Saturday as Bridge City escaped with a 4-3 win over the West Trojans. Cardinal closer Landon Reeves who has been outstanding so far on the season earned his second save of the tournament.

The whole Cardinal lineup is contributing to the run production which has resulted in the undefeated record so far. The two guys at the top of the batting order are showing why they were put there. John Van Huis and Brice Swanton are getting on base a lot and both run the bases really well causing havoc for opposing defenses to attempt to stop them. 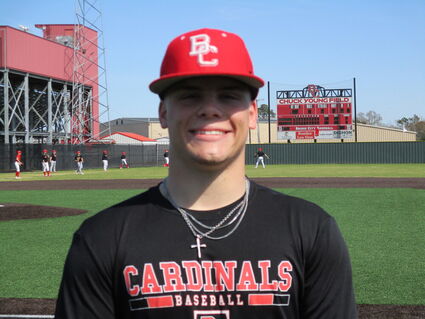 Bridge City played a game on Tuesday against a high ranked school from Louisiana the Sam Houston Broncos. The weekend of March 10-12, the Cardinals will participate in the Jasper Tournament which includes several quality teams with the Jasper Bulldogs, the Hardin-Jefferson Hawks, the China Spring Cougars, and the Longview Lobos.

The Jasper Tournament will be a final tune up before the start of the district schedule. Landry concluded, "It'll be a good test for us, it'll be kind of our last warmup to see if we can trust some guys in certain situations, and we're looking forward to it. Just another week to get better, it's exciting, it's fun coming to the yard every day. I think the good thing about it is that our guys are young and inexperienced enough to where they're still hungry every day at practice which is really good right now."

The first district game for the Bridge City Cardinals will be Tuesday, March 15, at Chuck Young Field in Bridge City against the Vidor Pirates. Game time will be 7:00 PM.