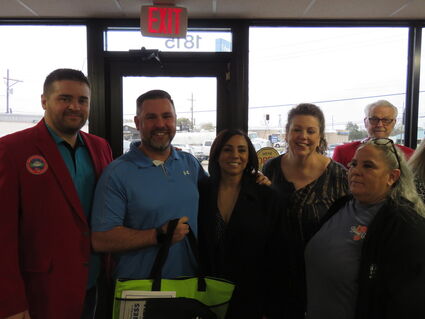 The Bridge City Chamber of Commerce is has announced that Farmers-Scot C. Shaffer Insurance Agency has been named Business of the Month for March 2022. Scot C. Shaffer was presented the award, sponsored by Energy Country Ford, by Ambassador Eric Andrus at the March Networking Coffee hosted by Karen Collier with Edward Jones.

The Scot C Shaffer Insurance Agency stated in Beaumont in 2002 and Moved to Bridge City on Nov 14th, 2004. Over the years the Agency has done its best to become a part of the Bridge City and Orangefield Community by supporting, sponsor and participating in as many local events as possible. The Owners Scot C Shaffer and Angel Shaffer have been blessing to be a part of the Community that has shown so much love back to them over the years. It has been an honor to serve the Community and run a business in a place that believes in taking care of both the current and next generations. They believe that if you invest back into your community your community will naturally invest back into you.

The Agency has always taken the approach that each customer is treated as a top priority, and they deserve more than a 1-800 number to speak to. A Face to Face during rate changes, explaining coverage and during claims is key to our success. The Scot C. Shaffer Insurance Agency has kept to the vision that we work for the customer and not for an insurance company. This has helped them become the Largest Farmers Insurance Agency in Orange County and one of the oldest single owned agencies in The Golden Triangle.

The Agency has over 46 years of combined insurance experience in the office and has earned countless Insurance industry awards throughout the years and is seasoned enough to take on whatever Mother Nature throws at us.