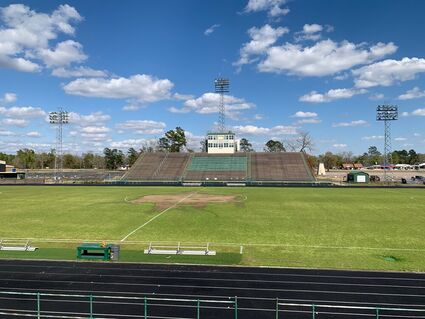 The most improved Orange County football team is getting an improved homefield.

Little Cypress-Mauriceville school board members voted to approve $5 million in athletic facility improvements that include an artificial turf playing field, a new seven-lane track and new restrooms for the home side of Battlin' Bear Stadium.

A project schedule prepared for trustees shows that the football field will be ready in August, in time for the 2022 football season.

Eric Peevey, LCM's athletic director and head football coach, guided the Bears to the fourth round of the 2021 playoffs and an 11-3 record which was a 10-win improvement in his first season at the helm.

He noted that LCM athletes had reached at least the second round of the playoff in all sports so far this school year.

"There's a lot of excitement in Bear Country right now, and my point is we want to be successful in everything," he said.

"This is one of the most successful athletic years Little Cypress-Mauriceville has had in a long time."

"The biggest thing we deal with is the ability for teams to continue practicing through all types of weather," Peevey said. "When I coached at Crosby, our baseball and softball teams would use our turf football field to practice when their fields were muddy.

"As long as it's not lightning, we can go out and practice and play."

West Orange-Stark and Vidor put down artificial turf fields in 2019 and Bridge City is nearly complete with an installation that began in December.

"The only games we played on a grass field last year were our home games," Peevey said, "and two of those were played in torrential rain."

The athletic facility improvement project will have a fourth priority: a new scoreboard; then fencing and lights, drawing from that $5M in maintenance tax notes.

The Texas Education Code allows school boards to issue maintenance tax notes as an allowable funding option for renovations and improvements of existing structures as long as the renovations do not involve new square footage or new locations.

Maintenance tax notes do not require a taxpayer election and this one shouldn't affect future tax rates, Peevey said.

"We're looking to update facilities to what's best for our students," the AD said. "And we're not having to raise taxes, or do a bond.

"I think any time you can do that, the community will see that's always a positive."

The LCMCISD board voted 6-0 in a special meeting on Feb. 28 to go forward with a series of tax notes to be issued and paid for in seven annual installments.

Along with the tax notes for football, track and stadium renovations, the board approved the purchase of six new tennis courts from district reserves.

On the agenda for the district's board meeting next Monday, March 21, is a maintenance tax note update.

The district has tabbed US Capital Advisors of Houston as its financial advisor for the project, with Beaumont law firm Creighton, Fox, Johnson and Mills its bond counsel. 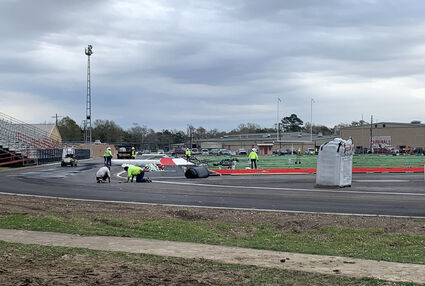 According to an LCM project timeline prepared March 4 for the March 21 meeting, CEI was to begin engineering March 10 and have plan documents complete by April 10, advertise for bids on construction beginning April 10, with the school board selecting a contractor May 9.

Aug. 12 is the target date for substantial completion of the stadium minus track surfacing.