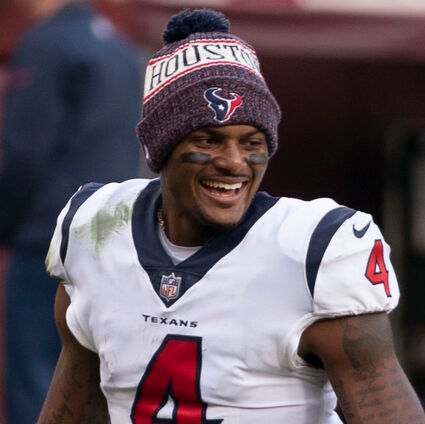 March 16 officially marks the beginning of the 2022 National Football League season, enabling teams to sign the free agents they have pursued since last month and to officially get the signature on new contracts or trades that were agreed upon verbally or with a handshake in the last few weeks.

Last week was a busy one for three franchise quarterbacks who either agreed to a new contract, the dollar figures from a verbal trade or—in the Houston Texans’ case—a grand jury’s no-bill to criminal charges.

What I’m referring to is the blockbuster trade by the Seattle Seahawks, getting rid of their franchise quarterback Russell Wilson to the Denver Broncos, the decision of Aaron Rodgers to remain with the Green Bay Packers and the dropping of criminal charges on Deshaun Watson, to the delight of the Texans who now have a real good chance of making a blockbuster trade of their own.

Seattle’s head coach Pete Carroll needs to refurbish his Seahawks, but at 71 years of age, he doesn’t want to spend the three or four years it generally takes to rebuild and get the new players into the right positions and the team again winning consistently.

NFL Network also reported that the 38-year-old Rodgers had agreed to a four-year, $200 million deal that includes $153 million in guaranteed money. On the same day the Packers placed the franchise tag on Rodgers’ favorite receiver Davante Adams for $20 million, unless he signs a long-term deal before July 15.

But the big news as far as Southeast Texas NFL fans are concerned, is the dismissal of Watson’s criminal charges by the Harris County Grand Jury. Several closest to his situation believe Watson will be able to settle all of those pending civil lawsuits with cash offers.

This should make some of those teams pursuing the talented quarterback willing to make a trade offer to Texans’ general manager Nick Caserio that would make both the Texans and Watson happy. There’s speculation the trade will be done long before the NFL draft on April 28. It could possibly happen later this week.

“Any quarterback-needy teams that said they weren’t interested were lying,” a former NFL general manager told the Houston Chronicle in its Sunday edition. “Now that serious charges are off the table, they will come and come hard.

“This is an unprecedented situation that could make a GM’s career,” he continued. “Years from now, everyone could be calling this the trade of the century. I’m not exaggerating.”

Seattle, Philadelphia, Carolina, New Orleans and Minnesota are some of the teams in need of a franchise quarterback like Watson. The biggest blockade for a trade could very well be a lengthy suspension for Watson’s violation of the NFL’s personal conduct policy, although he did sit out the entire 2021 season, but with pay.

But the Texans’ best quarterback must relent on the no-trade clause in his contract with only Miami on his trade list. Since then, the Dolphins report they have zero interest in Watson and are happy with quarterback Tua Tagovailoa going into his third season.

The 26-year-old Watson enters the first year of his four-year, $156 million extension that included a $27 million signing bonus that was amortized at $5.4 million a year over the life of the contract, according to Saturday’s Chronicle.

Pittsburgh needs a quarterback after the retirement of Ben Roethlisberger. Coach Mike Tomlin hired Brian Flores as an assistant recently, who was a driving force behind Miami’s interest in Watson last season.

I believe the Steelers are the sleeper in this Watson trade scenario because of the presence of Flores and the additional salary cap space that became available with Roethlisberger’s retirement.

KWICKIES…Now that the 99-day lockout of players by Major League Baseball is over, teams have begun spring training and former Houston Astros’ shortstop Carlos Correa can resume fishing for his record-breaking contract that he believes he’s worth. His best deal so far was when the Astros offered him a five-year, $180 million contract that is still on the table. A player already on a “measly” $25 million pact for this season—Justin Verlander—requires the 39-year-old fireballer to pitch 130 innings after his Tommy John surgery to trigger the $25 million option for 2023. If he doesn’t throw the 130 innings, his deal is for only one year. The Astros begin their Grapefruit League schedule Friday against the St. Louis Cardinals in Jupiter.

After holding out for nearly half a century, the National League is finally going to use a full-time designated hitter for the 2022 MLB season. They experimented with it during the shortened 2020 season and must have liked it. The DH will eliminate the automatic out when the pitcher came to bat and probably will reduce the sacrifice bunt dramatically.

It didn’t take long for Tom Brady to decide he still wants to play football and announced last weekend that he’s returning to Tampa Bay for the 2022 NFL season. And just like that--the Buccaneers’ odds for winning the Super Bowl jumped from 20-1 to 10-1 overnight. “I’ve realized my place is still on the field and not in the stands,” Brady told the media Sunday. “I’m coming back for my 23rd season in Tampa.”

The Dallas Cowboys traded unhappy wide receiver Amari Cooper to the Cleveland Browns and immediately signed wideout Michael Gallup to a five-year, $62.5 million contract extension plus a $10 million signing bonus. The Browns will use Cooper to fill the void left when Odell Bickham forced his release last fall and Gallup will replace Cooper as the No. 1 passing target.

I was saddened to hear about the death of Ed Roddy, 91, of Port Arthur. Ed was instrumental in forming the Golden Triangle’s Connie Mack League back in the late 1960’s and served as president of the league. I was manager of the butt-kicking team in Orange that everyone feared.

Texas A&M. Oklahoma, Dayton and SMU are the No. 1 seeds in this year’s 32-team field National Invitational Tournament (NIT).

Jordan Davis, Georgia’s 6-6, 341-pound defensive tackle, created perhaps the biggest buzz at the scouting combine by running the 40-yard dash in 4.78 seconds last week. It was the best time since 2003 of any players weighing more than 310 pounds, according to Next Gen Stats.

It was no big surprise when Tiger Woods was inducted into the World Golf Hall of Fame last week. He didn’t say anything about his 82 victories on the PGA Tour or his 15 majors or his eight surgeries he endured along the way, but talked about how his parents took out a second mortgage that allowed him to play the junior circuit in California.

The NCAA Men’s and Women’s Basketball Tournaments began this week with four regional divisions each. The men’s bracket has seven teams from the Lone Star State—Texas, Texas Tech, Baylor, Houston, TCU, Texas Southern and Texas A&M-Corpus Christi—while the Women’s bracket has five—Incarnate Word, Stephen F. Austin, Texas-Arlington, Baylor and Texas. If someone held a gun to my head and demanded I tell them the 2022 winners I’d blurt out Arizona in the men’s and South Carolina in the women’s.

JUST BETWEEN US…I may be the only person in Southeast Texas who is not shedding one tear because Marco Born has resigned as Lamar University’s athletic director, but he got off on the wrong foot with me when he fired the two softball coaches 10 minutes after getting off the plane that brought him here. He seemed to enjoy firing coaches during his tenure that ended when he took his “sabbatical” a few months ago. Not many athletic directors return after taking one of those. I wish the next place he lands all the luck in the world—because it will certainly need it!!!