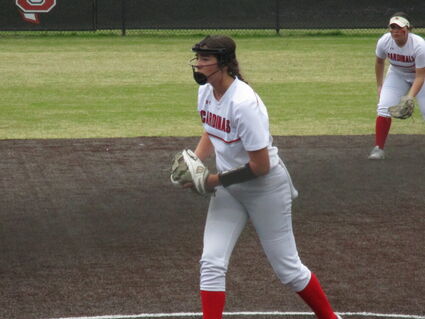 The tournaments are over and district play started this week for the local high school baseball teams. The girls are a week ahead of the boys as the district softball games began on Tuesday, March 8 and continue to be played this week.

The Bridge City Lady Cardinals have started strong winning their first two district games. The opener was against West Orange-Stark, and the Lady Cardinals' Kaydence Corkran was the starting pitcher shutting out the Lady Mustangs 20-0 for Bridge City.

The Lady Cardinals were solid in all facets of the game. Corkran of course yielded no runs, the Bridge City fielders committed no errors, and the Lady Cardinals collected 12 hits while scoring twenty runs.

The second district game was much tougher for Bridge City. The game was scheduled to be played Friday, March 11, at Little Cypress-Mauriceville, but intermittent rain caused the contest to be moved to the artificial turf in Bridge City which is more playable in wet conditions.

Coach Raven Harris called on her ace pitcher Carson Fall to start in the circle for the Lady Cardinals. Fall responded with a stellar effort striking out 16 Lady Bears winning the game 4-1. "That kid is something special. She shows up every single game. She does what she needs to do, and she's just the real deal. She's going to produce and she's going to throw strikes, and we battled behind her today so that was very positive," Harris praised.

Bridge City scored a run in the first inning and then added three more in the second. Lexi Nugier started the rally with a single. She was sacrificed to second before a base hit by Brooklyn Droddy put two Lady Cardinals in scoring position.

Both Nugier and Droddy scored on an LCM error. Haley Munoz who reached on the error later scored the third run of the inning on a single by Kaylyn Dosch.

Fall retired the first eight Lady Bears she faced before Rhylan Wilson singled. LCM scored its only run in the fourth inning as Keylie Washburn doubled off the left field fence with two outs and scored when Ava Wright followed with a double just inside the right field line.

In the sixth inning the Lady Bears threatened by loading the bases on a single by Jacelyn Cook and walks to Washburn and Wright. Fall bore down and struck out the next two LCM batters to spoil the potential rally.

Cami Shugart for the Lady Bears pitched well in the loss holding the Lady Cardinals scoreless over the last four innings. She faced just twelve batters in that span.

Little Cypress-Mauriceville beat the Silsbee Lady Tiger 8-6 in their district opener on Tuesday, March 8. Shugart got the win in the circle with seven innings pitched. She walked four, struck out 11, and gave up five hits. Only four of the Lady Tigers' runs were earned.

The Lady Bears' offense was led by the freshman duo of Lexis Moss and Keylie Washburn. Moss started things off with a two-out solo homerun in the first inning and then Washburn followed suit with her own solo homer.

Other Lady Bears who contributed were Shugart, Ava Wright, Jacelyn Cook, Ella Stephenson, and Rhylan Wilson each rapping one hit in the game. All together the LCM had 11 hits for the night.

Curphey had two hits, two walks, and an RBI. Senior Madison Hughes had two RBIs, and two runs scored with her two hits. Senior Joli Ponfick had a hit with a run scored. Sophomore Greenlea Oldham had a run scored.

The Lady Bobcats improved to 13-8 on the year. They were 1-0 in district play after a bye on Friday, March 11.

The season started slow for the West Orange-Stark Lady Mustangs with eight straight losses. Their last ten non-district games the Lady Mustangs played much better winning seven of those games including the last five in a row. West Orange-Stark had a team batting average of .309, an on-base percentage of .502, and stole 80 bases in 14 games.

The leading Lady Mustang hitters were Rayven Gales and Paris Overstreet both batting .500 or better during the non-district. Ariel Farris and T'Era Garrett hit one homerun to go with their high batting averages. Laila Rhodes and Farris were the top base stealers with 12 apiece. Katie Hogg has been a big run producer for WOS with 7 runs batted in.

The district games for the West Orange-Stark Lady Mustangs got off on a bad note with the loss to Bridge City. That game was followed up by a loss to the Lumberton Lady Raiders on Friday. Garrett hit her second homerun of the season for the Lady Mustangs in the second district game.

Games on Tuesday, March 15, included the Lady Bobcats playing against Silsbee, the Lady Cardinals hosting the Vidor Lady Pirates, and the Lady Bears traveling to Lumberton. LCM will host the Lady Mustangs on Wednesday instead of the normal Friday schedule.

Another key district game will be the Lady Bobcats playing their big rivals the Lady Cardinals on Friday, March 18, in Orangefield. Lady Bobcat Coach Rebekah Ragsdale previewed the contest. "Any time you've got anything with Bridge City and Orangefield there's always a little bit more on the line. They've got Carson Fall, so you know the task that's going to be at hand and the challenge you're going to have. The key is making sure we get the ball in play somehow someway," Ragsdale replied.

The Vidor Pirates also played the other five teams in the tournament but did not play either LCM or WOS. Those three teams are all in the same district.

The Bears got fine pitching and hitting performances from freshman Marco Bandiero as they beat Hamshire-Fannett 5-3 on Thursday. Bandiero struck out eight Longhorns and went two for three with the bat including an RBI double in the fifth when LCM scored two runs.

Dean Reynolds threw a third superb game for the Bears on Friday. Reynolds gave up one unearned run and hit the game winning sacrifice fly to score Ashton Landry as LCM beat the Beaumont Kelly Bulldogs 2-1.

The Bear bats made some noise in the final two games when they bombed the Big Sandy Wildcats 16-7 and the Hemphill Hornets 12-3. More good news for LCM was the return of Reid Peco to the lineup in the Hemphill game. Peco pitched three innings and then finished the game at third base.

Coach Hunter Hagler believes his Bears are playing well with the start of the district schedule this week. "I think we're starting to click, we're starting to do all the little things right, and getting where we need to go. It's all about competing, playing together, and winning ball games," Hagler announced.

West Orange-Stark lost all of its games played over the weekend in the tournament. The Mustangs are still looking for their first win of the season.

The final game provided some optimism for the Mustang cause. Grayson Gregory pitched a complete game for the Mustangs. Gregory struck out six batters and only two of the runs he allowed were earned. The Hamshire-Fannett Longhorns won the game 6-1 scoring all of their runs in the second inning.

The hitting star for the Mustangs was Andrew Wilson. He singled in the fourth to drive in Darren Anderson for the Mustangs' only run and then singled again in the sixth inning.

The Orangefield Bobcats remained undefeated on the season heading into district play this week. The Bobcats competed in the Silsbee Tournament over this past weekend.

Trent Eaves was brilliant on the hill on Thursday. Eaves threw five innings for his second no-hitter of the young season striking out ten and walking one to lead Orangefield past the Evadale Rebels 11-0.

The Bobcats tallied seven hits in the game. Eaves and Kameryn Henderson both collected multiple hits for Orangefield. Caleb Fregia tore up the base paths with two stolen bases.

Jason Bodin shut down the Warren Warriors throwing a complete game shutout and leading Orangefield to a 10-0 victory also on Thursday. Bodin allowed one hit over six innings striking out 12.

Kyle Michael singled and scored in the first inning for the Bobcats. Orangefield notched five runs in the seventh inning led by Michael, Bodin, Brennon Lecoq, Rusten Traxler, and Brayden Babin all driving in runs that inning.

The offensive onslaught by Orangefield was led by Caleb Fregia, Macoy Marze, and Shearin all sending Bobcat runners across the plate.

Cooper Longron was the winning pitcher for Orangefield. The lefthander went five innings, allowing two runs on three hits and striking out eight. Kolbie Sowell threw two innings in relief out of the bullpen. Sowell also went deep in the sixth inning for his first homerun of the year.

The Bobcats collected 15 hits on the day. Shearin, Marze, and Kameryn Henderson each had multiple hits for Orangefield. Shearin went 4-for-5 at the plate to lead Orangefield in hits. The Bobcats tore up the base paths again with Shearin leading the way with three stolen bases.

The Bobcats finished their pre-district schedule with a record of 11 wins, no losses, and one tie. District play for Orangefield began this week at Silsbee.

The competition at this past weekend's Jasper Tournament turned out to be just as tough as Bridge City Coach Chad Landry said it would be. The Cardinals lost their opening game 1-0 to Longview. It was the first loss on the season for Bridge City. Ethan Oceguera was the losing pitcher despite giving up only two hits in five and two/third innings. 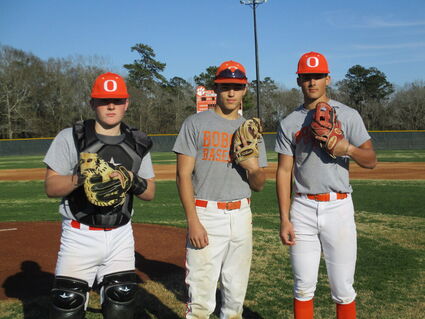 The Cardinals played host school Jasper in their final game of the tournament. Landon Reeves started on the mound for the Cardinals, and Bridge City took an early one run lead. Coach Landry limited Reeves' pitch count so he would be available for the district opener. The Bulldogs rallied late and achieved a walk-off win 2-1 over the Cardinals.

The tough competition at the Jasper Tournament prepared Bridge City for the very good teams in the district that started Tuesday against Vidor and will continue with the big rivalry game at Orangefield on Friday. "It's about as big as you can get for our area. It's back-and-forth, all the players know each other, they all grew up together. There are no secrets, we know what they're going to do, they know what we're going to do. It should be a really fun ball game," Landry analyzed.

The other game of interest on Friday will be the Little Cypress-Mauriceville Bears playing their crosstown rivals the West Orange-Stark Mustangs. The game will be played at Don Gibbens Field on the LCM High School campus.