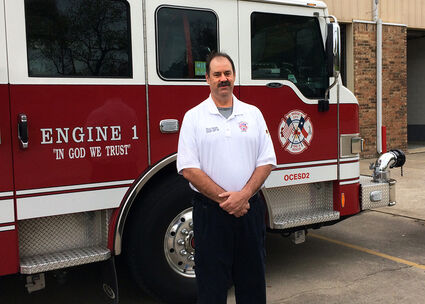 Fire Chief Ricky Bodin stands tall in front of the Orange County ESD 2 station in Bridge City. Bridge City's Volunteer Fire Department was organized in 1951 as part of the city's Civil Defense unit, which was created to help the community shelter against possible atomic bomb attacks during the Cold War.

It was set to be held May 7 along with city, school and county commission elections.

But Texas Secretary of State John B. Scott said no.

It will have to wait for November 8.

"The Secretary of State told us that under Election Code 41001, a county cannot order an election in May of an even-numbered year," Orange County Elections Administrator Donna Alford said.

"They decided to do the election in November."

An Emergency Services District, as defined by 1987 state law, is a local government agency created by a vote of the public to provide fire protection and/or emergency medical service in usually unincorporated areas of a county.

More than 300 ESDs exist in Texas.

The county government, as well as that of any municipality in a proposed ESD, must OK the creation of an ESD, then taxpayers in the ESD must vote for its creation.

Each one is a taxing entity, just like school districts and the county.

The difference is each takes only a small bite.

ESDs in Orange County are overseen by a five-person board of directors that have in the past been appointed to office by the Orange County Commissioners Court.

"Sen. [Robert] Nichols wants ESDs to be elected in areas where they have taxing authority. They all have the ability [to tax] but they don't all do it," County Judge John Gothia said.

"As it is now, it really amounts to taxation without representation. They need to be an elected board instead of an appointed board."

Nichols, Orange County's representative in the State Senate, co-sponsored the bill to make the change in last year's 87th Texas Legislature along with State Rep. Will Metcalf of Conroe.

Because Orange County's rep in the Texas House, Dade Phelan of Beaumont, was serving as Speaker of the House, he was not permitted to sponsor legislation. Metcalf acted as his surrogate when it came to introducing bills.

The legislation, known as House Bill 2494, passed both houses of the Legislature unanimously last spring and was signed into law by Gov. Greg Abbott on May 24, 2021.

It also abolished the policy in Orange County ESDs of having directors elected by geographic districts within the ESDs' jurisdiction.

All seats will be at-large, meaning all voters living in an ESD have a vote for every board seat. That was to encourage more people to run for board seats, said Angus Lupton of Sen. Nichols' staff.

According to Sam Taylor of the Secretary of State's Office, Texas Health and Safety Code 775.0345(h) dictates the way November's first-ever election will progress to reach a system of staggered terms, where two to three directors of each ESD will be elected in each even-numbered year beginning in 2024.

This November, all members who wish to remain on an ESD board will be on the ballot along with newcomers seeking to join the board.

According to a history of ESD 1 on its website, the Vidor Volunteer Fire Department was organized in 1952, with J.C. Arnold its first chief.

ESD 2 in Bridge City celebrates its founding date as 1953, with Archie Calhoun its first fire chief.

Charlotte Schexnider Chiasson reports in her book "The History of Prairie View and Bridge City" that the Bridge City Volunteer Fire Department originally was a division of the Bridge City Civil Defense Unit, which was created to help the community shelter against possible atomic bomb attacks during the Cold War.

Vidor's Volunteer Fire Department was recognized as RFPD 2 by Commissioners on Jan. 15, 1972.

The Vidor district was the first in Orange County to be converted to an emergency services district, under the 1987 Texas Health and Security Code, in 1993. Thus it is ESD 1.

The conversion of RFPD 3 (Little Cypress) and RFPD 4 (Mauriceville) to ESD 3 and ESD 4 was not noted in minutes of court meetings, Robertson said.

But Rural Fire Protection Districts were last mentioned in the minutes in January of 2004 and ESD 3 and ESD 4 were referenced for the first time in March 2004 minutes, Robertson said.