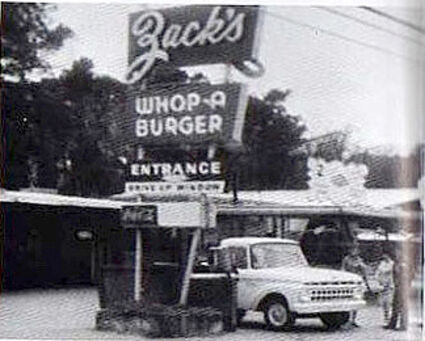 Don't blame YouTube and TikTok for foolish foods and dangerous stunts. Decades before the internet, teenagers in Orange butted their heads on 'Stop' signs and drank Cokes with dill pickle juice. Blame it on Zack's.

Zack's drive-in during the 1950s and into the 1960s, it was the gathering place for teenagers. The restaurant was owned by Mr. and Mrs. Zack Jacobs on the West Orange side of MacArthur Drive.

But it wasn't the youth that brought the first community notoriety to Zack's. In a 1981 interview, the Jacobs recalled having female carhops wear halter tops and shorts. Some churches complained. However, it was the complaints from sunburned carhops that led them to drop the uniforms.

The couple settled on carhop uniforms that included long, black pants that had a gold stripe down each leg.

Teenagers in a variety of cars, often belonging to their fathers, would stop for a Coke to be seen. Or, they might circle around the driveway to see who was there. MacArthur Drive had a traffic circle at the end, making it even easier to "circle the drag" and make a round at Zack's

The girls primped their hair and the boys would dare each other in stunts. Lots of pranks were pulled.

The late West Orange Police Chief Tony Taylor once recalled having to keep a watch over the traffic and the stunts. He said he saw boys running on foot full force to ram their heads into a stop sign.

MacArthur Drive also had Jim's and Drake's, while Simmons Drive had Elmers, but it was Zack's that attracted the most teen traffic. It was not necessarily good for business.

In a 1981 interview, Zack Jacobs talked about how the teenagers drove away adults and families. And the teenagers weren't big spenders. Mrs. Jacobs said teens would order a Coke for a dime and sometimes share it. Then they would stay for a long time.

And maybe that's how the pickle Coke was created. Boredom and a dare. One time in the mid-1960s at Zacks, someone ordered Coca-Cola with pickle juice. A cherry Coke with maraschino juice was common and popular. The pickle Coke took over the town. Some now senior citizens remember asking for an olive Coke with green olive juice.

Mrs. Jacobs in the 1980s remembered kids also asking for chocolate syrup in their Cokes. Tales have also been repeated about guys parking in the back of the drive-in restaurant and bringing spirits with them for their Coke.

By the late 1960s, the Jacobs built an indoor restaurant next to the drive-in and served the same kinds of foods. The drive-in was abandoned and the demolished in 1981. The Jacobs operated the restaurant until 1992, after his death.

The MacArthur Drive restaurant wasn't the first for the Jacobs. Their first Zack's Whop-a-Burger (before the first Burger King opened) was a walk-up stand on Second Street. They sold the first corn dogs in Orange, hand-dipped and fried.

The walk-up stand was off Green Avenue and was built soon after World War II, before Interstate 10 was constructed. The highway bridge into Louisiana was at the end of Green. The stand attracted shipyard workers, travelers, residents from the nearby neighborhoods of Gilmer Homes and Riverside along Simmons Drive.

The stand stayed open for 25 years before burning.

The Jacobs moved to Orange in 1938 after Mr. Jacobs got a job at the Grove nightclub in "East Orange, Louisiana." The Louisiana side of the Sabine River Bridge on Green Avenue drew a variety of nightclubs with entertainment and gambling. The Grove was the largest.

Mrs. Jacobs in 1992 said her husband took a defense job during World War II to build ships at Levingston. She said he was a welder, even though "he didn't know beans about it." He complained about getting eye burns.

When the war ended he started his restaurant business. Mrs. Jacobs was 83 when her husband died. She leased the restaurant in 1992 and moved to be with her daughter. The restaurant building has been gone for more than a decade.