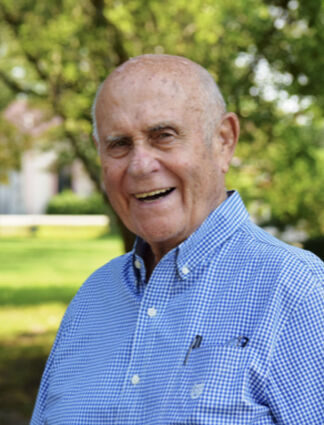 My flesh and my heart may fail, but God is the strength of my heart

James B. "Buster" Scales lived as a man of faith dedicated to his family and the community. He was a son, a father,

Funeral services will be at 2:00 p.m., Wednesday, March 23, at Claybar Funeral Home in Bridge City. Officiating

will be Reverend Keith Royal. Burial will follow at Hillcrest Memorial Gardens.

Visitation will begin at 1:00 p.m., Wednesday, at Claybar Funeral Home in Bridge City.

Buster was born in Ballinger, Texas, to James Burlie and Clarice Scales on October 13, 1928 and passed away on

March 17, 2022. He graduated from Lutcher Stark High School in 1946. After graduation Buster joined the US

Army as World War II came to a close serving as a member of the Allied occupation forces in Japan. He married

Sybil Goulas on March 9, 1951 at St. James in Port Arthur, Texas. Throughout their 54 years of marriage, they

enjoyed traveling all over the United States as well as overseas.

Buster worked at Texaco's Port Arthur refinery from 1951 to 1984 in a variety of positions, eventually promoted to

field engineer. In 1969 he established his own company - Scales Portable Buildings in Bridge City. This endeavor

called for him to expand his already impressive list of skills and became a master electrician.

Buster served as a deacon and then a preacher for Grace Communion International Church. During the last 20 years

of his life, he enjoyed making wine and mead for his friends and family, working in his garden and visiting with

He is survived by his brother, Harold Scales, his children and their spouses, John H. Scales (Brenda), Christy

Van Chau (Andrew), and his daughter-in-law, Donna Scales, as well as 19 grandchildren and 18 great-

Drew Van Chau.In lieu of flowers, memorials may be given to the Bridge City/Orangefield Ministerial Alliance, 200 W. Round