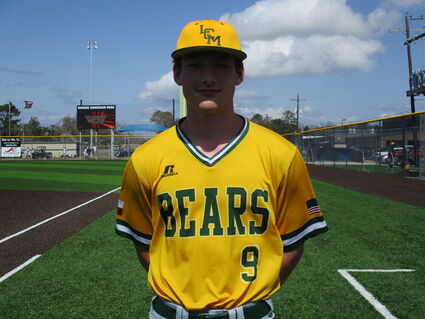 One week into the District 22-4A baseball games the race to finish in first place is already heating up. Only two teams out of the seven in the district remain undefeated through the first two games of league action.

The Little Cypress-Mauriceville Bears have won both of their first two games outscoring their opponents by a combined seventeen runs. The Bears defeated crosstown rival the West Orange-Stark Mustangs 10-0 on Friday, March 18, at Don Gibbens Field to raise their district record to 2-0.

Ashton Landry pitched a shutout in the shortened five inning game because of the 10-run rule. Landry helped his cause with a three-run homerun in the fourth inning and later added a two-run single in the fifth.

Coach Hunter Hagler of the Bears talked about the contributions Landry is making for the team. "Ashton is a complete competitor. He's a guy you want on your side. He plays the game hard, he plays the game right, and I think that he's getting rewarded for doing all those things right," Hagler praised.

The Bears totaled 17 hits in their district opener blasting the Lumberton Raiders 13-6 win at Lumberton on Tuesday, March 15. Landry, Reid Peco, Gage Griffith, and Marco Bandiero all had multiple hits in the game. Landry had the biggest bat in that game also going four for five on the night.

The Bears scored six runs in the second to take the lead for good. Three Bear batters battled to get base on balls in the inning. Landry and Peco had key hits in the big inning.

The winning pitcher for LCM was Peco who pitched five innings allowing four runs on six hits while striking out three. Brice Frenzel pitched the final two innings striking out the last two Raider batters to earn the save.

The Silsbee Tigers are the only other district team without a loss through week one of the district schedule. The Tigers had a bye on Friday, March 18, so they have only played one game going into the second week of the district.

The Orangefield Bobcats suffered their first loss of the season in the district opener falling 5-1 at Silsbee on March 15. The Tigers got an excellent pitching performance from Logan Simmons who threw a complete game allowing one run on three hits and striking out nine Bobcats.

Tyler Shearin led the Bobcats' offense with two hits in three at bats. Orangefield did not commit an error in the game.

The Bobcats rebounded nicely from that opening district loss by clobbering the Bridge City Cardinals 10-0 at Orangefield on Friday, March 18. Pitcher Coop Longron threw a complete game five-inning shutout allowing just two hits, walking one, and striking out five Cardinals for the win.

Orangefield got on the board in the first inning when Jason Bodin singled on a two-two pitch to drive home Shearin with what turned out to be the winning run. The Bobcats scored in every inning but the second.

Orangefield scored three runs in the third and added four more in the fourth inning. A final two runs in the fifth invoked the 10-run rule ending the game with the Bobcats as the victors.

The offensive onslaught came from several walks and eight hits in the game for Orangefield. Rusten Traxler and Macoy Marze coaxed vital walks in the Bobcat rallies. Kyle Michael, Brennon Lecoq, and Bodin all produced multiple hits for Orangefield. Bodin had a double among his hits for the Bobcats who are now 1-1 in district and 12-1-1 for the overall season.

Coach Tim Erickson of Orangefield was hoping to see if his Bobcats could bounce back after their first loss of the season to Silsbee. "We wanted to see our guys respond to Tuesday's game and they did in a big way. Walking it off in the fifth I thought that was pretty impressive. We just stayed on them the whole game, had some good at bats, knocked their starter out of the game early, and just really never looked back. We did a good job," Erickson praised.

Bridge City is tied in the district standings with Orangefield and Lumberton at 1-1 following the loss on Friday, March 18. The Cardinals won their opener 4-3 at home against the Vidor Pirates on Tuesday, March 15.

The emphasis for Bridge City this year with the bat has been small ball and scratching out runs. That worked for the Cardinals in this game as they only had three hits yet scored four runs. Chasse Goodwin drew a bases loaded walk to drive in one run, a wild pitch scored another run, and Deegan King brought home a third run with a ground out in a three-run third inning for Bridge City.

Braylen Collins led off the fifth with an infield single, the only base hit of the inning. Collins scored when Aidyn Mulhollan was hit by a pitch with the bases loaded following a previous hit batter and a walk.

Senior Ethan Oceguera who was persuaded to come back out to play baseball his final year at Bridge City High School got the start for the Cardinals. Oceguera pitched well lasting until the sixth inning striking out three and allowing three runs by the Pirates to earn the win.

Bridge City Coach Chad Landry complimented Oceguera and Landon Reeves for their fine pitching in the win. Reeves continued being the closer for the Cardinals getting the final five outs allowing just a walk and hit batter to pick up the save for the Cardinals.

The recipe for the victory has been a similar one this season according to Landry. "Another one-run game. We don't have the offensive fire power to put anybody away, so we've got to continue to pitch real well, and I was really proud of our defense too, we did a good job especially in the sixth when shortstop Brice Swanton made a great play to get the lead guy out at third. That was huge for us to get out of that inning," Landry reminded.

The West Orange-Stark Mustangs are very young and are struggling to earn their first win of the season. The Mustangs had a bye on Tuesday, March 15, so their only game through last Friday in district was the 10-0 loss to Little Cypress-Mauriceville.

Pitcher Carson Fall was dominate in the 4-0 win for Bridge City at home against the Vidor Lady Pirates on Tuesday, March 15. Fall registered 20 strikeouts in the shutout.

Shortstop Marlie Strong scored the first run of the game in the second inning. She opened the inning with a single was moved to third on sacrifices by Brooklyn Droddy and Haley Munoz before scoring on a single by Nicole Sasser.

Munoz and Sasser combined to get two more runs for the Lady Cardinals in the fourth to put Bridge City up by the eventual four-run winning margin. "Last season we were lucky to get one or two runs across the plate, so we've really hit better so far to give Carson the space so she can relax a little bit," Lady Cardinal Coach Raven Harris analyzed.

In what was billed as a matchup of the two best softball pitchers in District 22-4A Fall was in the circle for the Lady Cardinals against Abigail Curphey of the Orangefield Lady Bobcats on March 18. The game hardly started as a pitchers' duel as Bridge City and Orangefield scored four runs in the first two innings to keep the teams tied.

Kaylyn Dosch started the game for the Lady Cardinals with a single. Dosch scored the first run on a Lady Bobcat error.

Orangefield responded with two runs in the bottom of the first. Joli Ponfick and Madison Hughes got the rally going with singles before Harleigh Rawls loaded bases when she was hit by a pitch. The two runs scored on a hit by Abby Broussard.

Sasser hit a leadoff double in the second for the Lady Cardinals. Munoz moved her to third with a bunt, and Lynsie Barg brought Sasser home with the tying run on her bunt single.

This is when the pitchers' duel really started. Fall and Curphey threw goose eggs for the next five innings causing the game to go to extra frames.

In the eighth Strong opened the inning with a single. Sasser had hit safely her first three at bats, but hit into a fielder's choice for the second out of the inning. Sasser then showed her speed stealing two bases and the throw to third got away allowing her to sprint home to score the go ahead and eventual winning run.

Coach Harris was proud of her Lady Cardinals. "It was not our best game, but we showed up and competed for the whole eight innings that we played, so that's all I can ask for. We pulled out a win and that's the best news of the day," Harris replied.

Coach Rebekah Ragsdale for Orangefield consoled her pitcher Abigail Curphey after the tough loss. "I am so incredibly proud of her. She has filled Codie Sorge's shoes and done a fantastic job, she's throwing her tail off for us right now so I can't ask for much more," Ragsdale indicated.

Earlier in the week the Orangefield Lady Bobcats defeated the Silsbee Lady Tigers 15-1 raising their record to 2-0 in district play before their first district loss at the hands of the Lady Cardinals. Curphey got the win for the Lady Bobcats pitching all seven innings yielding just one hit, one walk, and one unearned run while striking out 13 Lady Tigers.

Other Lady Bobcats contributed with their bats as Madison Hughes added three hits and scored three runs. Joli Ponfick had a hit and two runs scored. Abby Broussard had two hits and three runs scored. Alysen Vincent, Paris Becker, and Greenlea Oldham each scored or drove in a run.

The Little Cypress-Mauriceville Lady Bears bounced back from their loss to Bridge City on March 11 with two wins in two days during the week that followed. The Lady Bears won a tight one 3-2 at Lumberton on March 15 before winning 10-0 over the West Orange-Stark Lady Mustangs the next day at home.

Cami Shugart was the winning pitcher for LCM in both games. Shugart allowed only three Lady Mustangs to reach base in the second game on a hit, an error, and a walk. She struck out eight in the six-inning game.

Coach Dena Adkins of the Lady Bears is counting on more big games from Shugart in the circle. "I like it when Cami has her stuff under control and hits her spots. She had good control of the ball today and she handled the batters well," Adkins evaluated.

Natalie Sims for WOS also pitched good except she had a rough time in the fourth inning when the Lady Bears scored five of their runs. The Lady Mustangs played outstanding in the field behind Sims with no errors, and Paris Overstreet started a double play on a grounder to third in the second when the score was still close.

Despite the loss the performance by the Lady Mustangs may set the tone for the remainder of the season for his team according to West Orange-Stark Coach Matt Robertson. "This is the best district game that we've played defensively. We've got to hit better. If we hit the ball we're going to give some people some problems because when we get on base we can run. It's hard to do anything with a goose egg on the board, you can't win a game with a goose egg on the board," Robertson analyzed.

The baseball and softball teams play the same schedules now through the end of the softball season on April 22. The boys and the girls will have the same opponent each night there is a game. 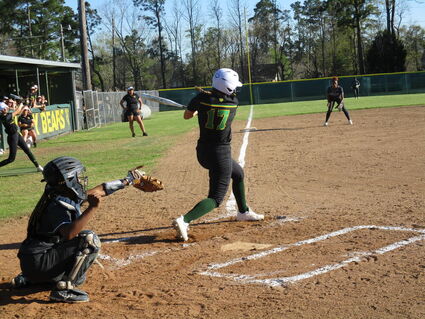