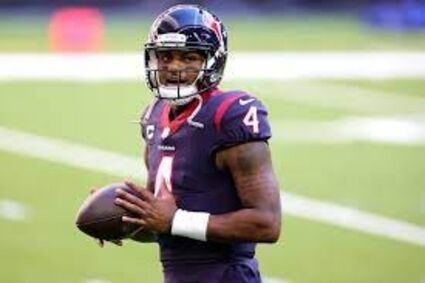 While sports fans were enjoying the second round of the NCAA March Madness basketball tournament last weekend, Houston fans had some madness of their own as they watched two of the city's best players at their respective sport and position decide in less than a 24-hour period to leave town and head north to resume their illustrious careers.

What I'm referring to is the fact former quarterback Deshaun Watson-who was rated by most fans as the best quarterback to ever wear a Texans or even Oilers uniform-and shortstop Carlos Correa-also considered the best at that position to ever wear an Astros uniform-both agreed to new contracts with other teams Saturday and Sunday.

The straw that broke the proverbial camel's back for Watson before last season started was when the Texans' owners, general manager and field manager interviewed prospects who were selected by the group to interview for the job WITHOUT getting any input from their quarterback Deshaun Watson.

Before the 2020 NFL season got under way, then general manager/head coach Bill O'Brien cut the team's best receiver DeAndre Hopkins and best defensive lineman ever J.J. Watt and got nothing in return for either player. The Texans 0-4 start of the season got O'Brien unceremoniously fired with defensive coordinator Romeo Crennel named as interim head coach.

The team didn't do very well (4-12) and at season's end Watson demanded to be traded. But new general manager Nick Caserio, who spent his entire career under the influence of New England Patriots Bill Belichick, refused to jump at the first offer for Watson and kept him on the active roster the entire season without him getting a snap.

Caserio patiently listened to other teams' general manager's offers for Watson but balked at all of them.

After Watson was cleared by the Houston grand jury of any criminal charges. suddenly Caserio's phone rang off the hook with some very legitimate trade offers. He wanted No. 1 and No. 2 draft picks for Watson that most of the callers did not have available.

Another problem was the "no-trade" clause O'Brien built into his new extended four-year contract that kicks in this coming season. Watson had narrowed the teams he would play for down to four-Cleveland, Atlanta, Carolina and New Orleans. The first team Watson crossed off his list was the Cleveland Browns, for whatever reason.

But when Cleveland owners Dee and Jimmy Haslam came back a couple of days later and offered a brand new five-year $230 million contract that was fully guaranteed, Watson immediately waived his no-trade stipulation and leaped at the deal.

Now instead of playing in the 72-degree comfort of NRG Stadium all season long, Watson will have to endure the inclement weather stimulated from Lake Erie that should make his quarterbacking job much more difficult than it was in Houston.

Another problem Watson will face is how the city of Cleveland will respond to a player bringing so much controversial baggage with him like the 22 sexual assault civil lawsuits still facing him.

Browns' football fans will probably cut him some slack because they haven't had a championship team since 1964 during the Jim Brown era and they are optimistically confident Watson will become their "savior".

Correa is another story. Astros' fans were hoping he would stay and take the team's generous offer of five-years, $160 million, but he decided on the Minnesota Twins' three-year $105.3 million which doesn't even make sense for him to play fewer years for less money on a team that finished last season 73-89.

The talented 6-4 shortstop also turned up his nose at a 10-year, $275 million offer by Detroit and his old Astros' manager A.J. Hinch, who now pilots the Tigers.

Now, just like in Watson's case, he will be playing at Target Field in Minnesota which doesn't have a roof. And it snows a lot in Minneapolis during April.

The Astros will miss their team leader immensely, but his absence shouldn't hurt how they should finish in October. They probably will make the playoffs and be one of the American League teams favored to win the 2022 World Series.

The Texans won't be as fortunate this season and probably even in 2023, but with 10 picks in next month's NFL draft and those extra first rounders they have coming up in the next couple of years, Caserio's rebuilding project should go well.

And with the huge salary cap the Texans gained by the trade, he should get some great talent from the free-agent marketplace.

It may not take Houston fans that long to forget Deshaun Watson and Carlos Correa!!!

KWICKIES...Two Texas teams made it to the Sweet Sixteen last weekend as the University of Houston outclassed Illinois 66-53 and now must play No. 1 seed Arizona tomorrow (Thursday) while Texas Tech edged past Notre Dame 59-53 and will play second-seeded Duke also tomorrow and try to end their head coach Mike Krzyzewski's fabulous career.

And while on the subject of the Sweet 16, surprising teams making it to the third round include No. 15 St. Peter's, No. 11's Michigan and Iowa State and No. 10 Miami. On the other side of the coin, the Baylor Bears are the only No. 1 seed to get bounced from the tourney.

I was saddened Monday to hear about the death of my former next door neighbor and golf partner Norbert "Mickey" Bergeron (pronounced Badger-ron). Mickey played quarterback for USL (now Louisiana - Lafayette) and loved to watch High School Football. After watching the state champion West Orange - Stark Mustangs for several years, Mickey was fortunate to get transferred by his job to the Southlake Carroll School District and another State Championship Team. Mickey was very competitive, but unfortunately lost his battle with cancer after fighting it for several years.

The Houston Texans lost two quarterbacks by trades or free agency in Deshaun Watson to Cleveland and Tyrod Taylor to the New York Giants. Others switching teams include Russell Wilson from Seattle to Denver, Carson Wentz from Indianapolis to Washington, Buffalo back-up Mitch Trubisky to Pittsburgh and Terry Bridgewater from Denver to Miami. The big question mark is where is former Cleveland Browns quarterback Baker Mayfield going to play next season? Indianapolis appears interested in him and the deal could very well be done before this Korner hits the streets Wednesday.

Green Bay's talented receiver Devante Adams has been quarterback Aaron Rodgers' favorite target for the last eight years and suddenly he bolted to the Las Vegas Raiders to join his college quarterback Derek Carr when they both played at Fresno State. In his farewell address to the city of Green Bay and the Packers' fans, Adams didn't mention Rodgers one time, which is really strange. Adams has a five-year deal that will pay him $141 million, the richest deal ever for a wide receiver.

Now that Carlos Correa is a Minnesota Twin, the Houston Astros are putting their faith in young Jeremy Pena, who has three weeks to prove himself as a major league shortstop. Pena has played in only 30 games above Class A Advanced. But the job is his to lose to back-ups Niko Goodrum and Aledmys Diaz.

JUST BETWEEN US...I usually don't stray off the subject of sports much but I can't believe that the Ukrainian refugees fleeing from the Russian murderous maniac's destruction of hospitals and homes with just the clothes on their backs and a few belongings look so well- dressed and relatively calm. I'm happy my fifth and sixth cousins in Poland are helping them to relocate and resume their lives in another country of their choice.