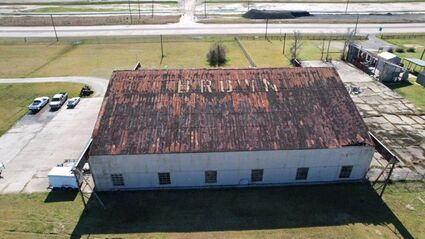 The Brown family name will continue to top the southernmost hangar at Orange County Airport after its ongoing restoration.

A beaten-down piece of Orange County history is getting a reboot.

The Brown Family Hangar at Orange County Airport is undergoing a restoration, thanks to a well-planned insurance policy and Hurricane Laura.

Edgar Brown Jr., the grandson of Henry James Lutcher, who was one of the wealthiest timbermen in the United States, built what is now Orange County Airport as a private airport in 1946.

The airport originally had four grass runways on land elevated to create the greatest drainage. The hangar, located on the south end of the property, was also built in 1946.

Brown was in the process of recruiting petrochemical companies to build plants on FM 1006, what's known as Chemical Row.

The county is currently renting out the hangar to a mechanic.

Guidry says the hangar is 12,800 square feet, which was roomy enough to store a fleet of airplanes, including a showpiece Douglas DC-3, which would carry 21 passengers.

"I like the historical part of it, but some stuff [information] is hard to find," said Missy Pillsbury, the county's airport manager and 2021 General Aviation Airport Manager of the Year, according to the Texas Department of Transportation Aviation Division.

"I know when this opened, it was one of the biggest and best equipped private airports in the United States."

In 2019, the Orange County Airport hosted a fly-in of private pilots from around the country and many exhibits, including a Douglas DC-3. It was a huge success but COVID-19 squelched subsequent events.

Pillsbury said she has plans to host another fly-in on May 7.

Repairing county buildings damaged by the 100-miles per hour winds of Hurricane Laura in 2020 has been slow because Guidry and his staff has a lengthy list of repairs needed, some from as long ago as Hurricane Harvey in 2017.

"The only thing the doors need is greasing the rollers," Guidry said. 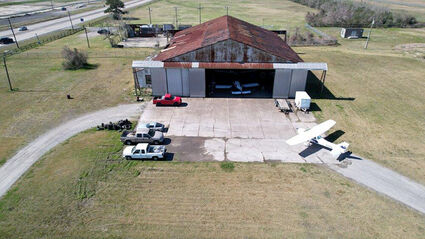 The Brown Family Hangar, seen before restoration began in March, was built in 1946 by Edgar Brown, Jr., a developer of Orange's Chemical Row with its many petrochemical plants.

"As far as the building itself, our insurance company has hired a subcontractor to replace all the corrugated metal roofs and all sides. They have to do some woodwork and some structural work on roof and east side of the buildings.

"There's a big gaping hole on the roof and materials that need to be replaced. We can't replace the single-pane windows that were there, many of which were broken by flying debris, so the Brown Hangar will not have any more windows."

The work is to take six weeks and the county intends to add lighting inside and out and upgrade the power in the hangar from 100 amps to 200 amps.

The timeline for finishing the repairs is six weeks, weather permitting.

Guidry said previous damage to the building included "some broken glass and the doors were blown off their tracks," by previous hurricanes, but those repairs were made before Laura.

"In 2005, Hurricane Rita ripped the original doors off. In 2008, Ike messed up the doors front and back," Guidry said. "Other than that, there's been no hurricane damage."