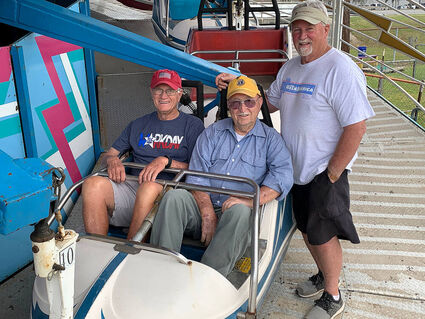 When John Martin volunteered to work his first Lions Club Charity Carnival in 1966, he was assigned to head up a group running a new ride dubbed "The Comet."

It was quickly renamed "The Vomit Comet."

In addition to the mechanical ride spinning around a center axle like a wagon wheel, riders could spin a wheel inside their individual cars to make the cars go round faster and faster.

"We didn't know how to run it at first. The first night we had about 40 people throw up. We spent all our time cleaning up," he said.

"The second night, we shortened the ride and got it down to 20 people throwing up."

The Comet is no longer a part of the carnival rides offered at the two-week fair at Orange's Lions Den Park.

Admission is $3 for adults, $2 for students aged 10-17 and youngsters under 10 are admitted free.

Proceeds of the carnival will be used by the Lions Club to fund club causes like the Eyeglass Bank, scholarships for youngsters to Lions Club Camp, food baskets and their beautification tree project and the Texas Ramp Project for the wheelchair-bound.

Among the club-owned rides this year's carnival will feature is the return of the "Big Eli Wheel," a ferris wheel manufactured by the Eli Bridge Co. in 1969,

The ferris wheel is making its first carnival appearance since 2019.

"It's been down two years because we had to replace the axle," said Martin, who now works with fellow Lions Clubber James Simar at the ferris wheel.

Simar is one of the younger club members joining in the past few years to bring the Orange Lions membership up to about 100.

"We won't turn any volunteers away," Lion Ed Freiberg said. "Some school kids turn out to help."

Across the midway from the ferris wheel, Butch Campbell runs the historic merry-go-round.

Dating back to 1954, it was the fourth built out of surplus World War II military tanks by the San Antonio Rollerworks.

"The older people stop and ask about the historical significance of the merry-go-round."

The history of the local carnival goes back to the 1930s and covers every year but two; the annual event wasn't held once during World War II, the other 2020 during the height of the coronavirus pandemic.

Lions Club members Martin, 85, Campbell, 67, and 77-year-old Ed Freiberg have more than 100 combined years of work at the carnivals.

Freiberg, a DuPont exec who moved to Orange in 2001, was welcomed to town and recruited to the Lions by former Orange and Pinehurst mayor Dan Mohon. They worked as co-chairmen for the cold drinks booth until Mohon's death in 2020.

"I've been Club President and carnival chairman before, done anything they have to do, but basically, I was Dan's assistant," Freiberg said.

"During carnival, my day starts by dropping by H-E-B and getting 30 cases of water every day. It's probably our best seller."

Martin, a mechanical engineer at DuPont until his retirement, has been the carnival's chief mechanic for four decades or so. But recently, Simar took over that job. 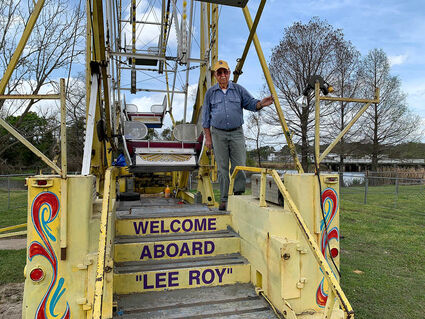 John Martin, an 85-year-old DuPont retiree, has been volunteering at the Lions Carnival in Orange since 1966.

All rides are inspected prior to each carnival and Tuesday, they passed muster with the insurance company.

"The insurance inspector always compliments us on the condition of our rides," Martin said. "We look after them and make repairs as needed."

Campbell, a Lamar State College Orange retiree wore "a bunch of hats on a small campus," he says, starting as an educator and finishing as head of security.

This is his 27th year to work at the carnival and he appreciates its history.

"This thing started years and years ago when a young man in Orange needed surgery and his family couldn't afford it," Campbell said. "They started this carnival to raise money for his operation.

"This whole thing is a labor of love. We're an all-volunteer army. Nobody is paid out here except the policemen for their presence."