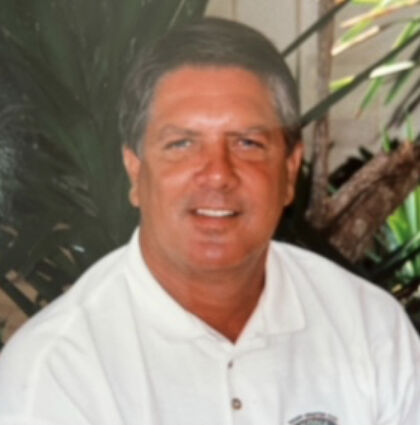 Norbert Michael “Mickey” Bergeron, peacefully passed away Monday, March 21, 2022 in Houston, Texas at the age of 75 surrounded by his family after a nearly 5 year battle with Leukemia.

Born February 24, 1947 in Baton Rouge, Louisiana to Curtis and Edna Bergeron, he was the youngest of three children. Mickey grew up in Baton Rouge and graduated from Glenn Oaks High School in 1965 where he excelled in academics and athletics. After considering academic offers, he decided to pursue his first love — football — and accepted a full scholarship to play at the University of Southwestern Louisiana (USL) in Lafayette. At USL, he found a second home and formed life-long friendships with teammates and coaches and met the love of his life, Peggy Patout. He was part of the 1968 Conference championship team and graduated in 1969 with a Bachelor of Science in Chemical Engineering.

His first job was with Crown Zellerbach in Bogalusa, Louisiana. He retired in 2017 after a 47-year career in flexible film packaging. During his tenure, his company was acquired several times and consequently, he worked for James River Corporation and then ended his career with PrintPack. He was known in the industry for his expertise in his field and traveled around the world advising and troubleshooting for companies to meet their specific packaging needs. As he progressed in his career, he resided in Houston, Texas; St. Louis, Missouri; Colleyville, Texas; and Orange, Texas where he spent 23 years.

Although he traveled almost weekly, he would always make sure to be home on Friday afternoons to participate in his three children’s weekend activities. He enjoyed watching his kids perform in Friday afternoon pep rallies and rarely missed a game under the Friday night lights at West Orange Stark high school football stadium. He remained a WO-S season ticket holder long after his children had graduated high school. He volunteered with the Knights of Columbus and St. Mary’s school.

He was a sports enthusiast and was a multi-sport athlete growing up. Throughout his life, he remained active by playing softball, tennis, golf and coaching or attending his kid’s sporting events. He especially liked following all three of his children during their high school and college golf tournaments. He logged countless steps on numerous golf courses across Texas and Louisiana. Later in his life, there is nothing “B” enjoyed more than attending his grandchildren’s sporting events.

He was an avid reader and was rarely without a good book, crossword or Sudoku puzzle in hand. He loved a road trip and mapping and sharing shortcuts for the optimum route. He enjoyed fishing and going to the beach with his family and friends.

Funeral services will be held at 11:00 a.m. on Saturday, April 2, 2022 at St. Mary’s Catholic Church, 912 W. Cherry Avenue in Orange, Texas. Officiating will be Father Jim Sichko, Papal Missionary for Pope Francis. The interment will follow at a later date in St. Nicholas Cemetery, Patoutville, Louisiana.

In lieu of flowers, memorial contributions can be made to the Leukemia & Lymphoma Society (LLS) at https://givenow.lls.org/ or to St. Mary’s School Foundation at 912 W. Cherry Avenue, Orange, Texas 77630