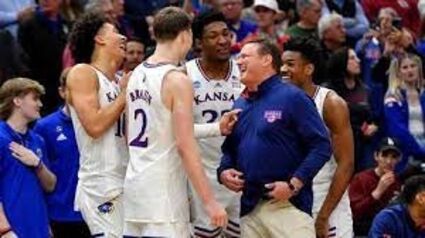 With the Kansas Jayhawks the only No. 1 seed in this weekend's Final Four, they have to be the favorites to win the 2022 NCAA Men's Basketball Tournament. Right?

Not so fast came the reply from many basketball gurus featured on the sports talk shows both on the television and radio early this week.

After all, the Jayhawks didn't have to sweat it out at the end of any of their four victories leading up to their semifinal clash against No. 2-seeded Villanova Saturday evening in the opening game of the Final Four.

My choice to win it all comes from the heart rather than the brain as I'll be rooting for Duke and my fellow countryman Mike Krzyzewski to end his magnificent coaching career in a blaze of glory.

If the Las Vegas Boys are right, four-point favorite Duke should meet 4 ½-point favored Kansas in the national championship game on Monday.

Villanova cannot possibly catch the Jayhawks as cold as Houston was in their 50-44 loss Saturday night in the South Regional finals when the Cougars were able to connect on only one of their 20 three-point tries.

The Coogs missed 40 shots in that atrocious performance, hitting only 17 of 57 tries from the field. Villanova canned a three-pointer in the first 30 seconds of the game and never trailed.

But the game did not get out of hand, with Houston having several chances to make a run and get ahead. The Coogs stayed within striking range throughout and trailed only 46-42 after a bucket by sophomore star Jamal Shead with 1:25 left to play, but Houston did not make another field goal the rest of the way.

The game that had everyone's attention was Sunday's East Regional Finals between the Tar Heels and the No. 15-ranked St. Peter's Peacocks, the greatest Cinderella team in NCAA Tournament history.

People took an interest in the first round of the tournament when the Peacocks upset No. 2-ranked Kentucky 85-79 in overtime. And to think that the annual salary of St. Peter's head coach Shaheen Holloway is $266,000, the amount Kentucky coach John Calipari makes in 12 days.

Just to show that win wasn't a fluke, the Peacocks met No. 7 Murray State in the second round and whipped that high-scoring team 70-60.

St. Peter's met No. 3-seeded Purdue for a position in the Sweet Sixteen and disposed of the Boilermakers 67-64 and became the first No. 15 seed to make it to the Elite Eight and a game against eighth-seeded North Carolina for the East Regional championship.

The Tar Heels' first-year head coach Hubert Davis commented before Sunday's game, "St. Peter's has beaten two opponents in the NCAA Tournament-Kentucky and Purdue-that beat us. They have our full attention and rightfully so."

However, the Peacocks finally had a bad game at the wrong time with cold shooting and poor rebounding and the only No. 15 team to reach the Elite Eight in tournament history was disposed of handily by North Carolina 69-49.

In fact, none of the 296 teams seeded 13 or 14 ever made it as far as St. Peter's in the NCAA tournament. Two No. 12's have made it that far, but they were "big stage schools"--Oregon State and Missouri.

The three teams the Peacocks upset-Kentucky, Murray State and Purdue-came into March Madness with 177 NCAA tournament wins in their history

The average attendance for St. Peter's home games was a paltry 346 which ranks 343rd among the nation's Division I schools. Their multi-purpose gym in Jersey City was shared by the intramural program and community bake sales.

Almost all of their road games were by bus and if the Peacocks won, the players were rewarded with a milk shake to drink on the way home.

KWICKIES...I think it's neat that Peyton Manning is insisting that Tom Brady return all the gifts he received after announcing his retirement, now that he's declared himself "un-retired".

The rumor going around the men's NCAA tournament is that Shaheen Holloway will be leaving his low-income coaching job at St. Peter's to take over the basketball program at Seton Hall, his alma mater.

And speaking of coaching changes, Beaumont United on Monday greeted its next head football coach Darrell Colbert, who is a Beaumont ISD graduate. He was formerly athletic director and head football coach at Houston ISD Westbury High School. Colbert attended Hebert High and later West Brook and was a member of the 1982 state championship team. He went on to play at Texas Southern University, finishing his career as the all-time leader in receptions (215), touchdowns scored (32) and is second all-time in receiving yards (3,177). He was the SWAC freshman of the year and was all-conference all four years. He played in the NFL with the Kansas City Chiefs and New Orleans Saints and also had stints in the Canadian Football League.

The Los Angeles Angels announced last weekend that they will pitch reigning American League MVP Shohei Ohtani on opening day at Angel Stadium against the Houston Astros on April 7. Although the Astros haven't yet announced their starter, it most likely will be ace Justin Verlander.

And while on the subject of major league baseball, the St. Louis Cardinals announced that their home run king Albert Pujols will play for them this season, instead of retiring like most fans believed.

The hottest player on the PGA Tour, Scottie Scheffler, captured his third tournament in his last five starts and has moved up to No. 1 in the world. He is the sixth-youngest player to reach No 1 since the world ranking began in 1986. The 25-year-old Texan never trailed against Kevin Kisner in Sunday's final round of the Dell Technologies Match Play for a 4-3 victory. Scheffler also never trailed in the semifinal win over Dustin Johnson and went the final 57 holes never trailing at Austin Country Club.

JUST BETWEEN US...It looks to me like Deshaun Watson got his career started on the wrong foot with the city of Cleveland, especially the Browns' female fans after he denied the sexual assault allegations that led to the 22 civil lawsuits currently facing him. And when he claimed to have "no regrets" about the incidents, most women really objected about their new quarterback that some Dog Pound fanatics refer to as their "savior" to Cleveland football. They didn't exactly calm down when Watson said it was "hard" for him to say whether he'd pursue counseling because "I don't have a problem," he claimed at last weekend's introductory news conference. He spent much of the 40-minute news conference defending his character and denying the allegations "with the most defiant rhetoric". My question is what human being needs 22 different massage therapists (and that's only the ones that filed lawsuits)? I don't believe Houston Texans' fans are crying many tears now that he's officially gone and General Manager Nick Caserio can proceed with his rebuilding project with that weight off his back.